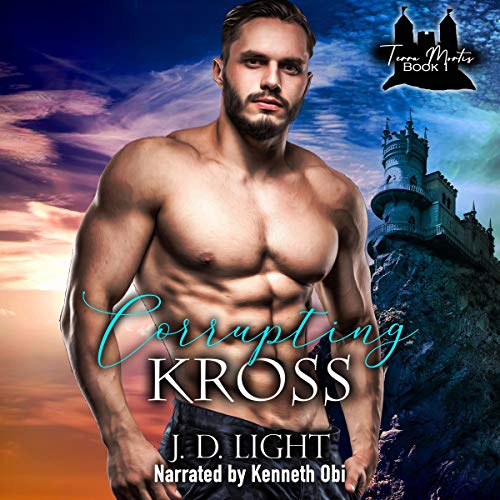 I know there is more to Kross than most people see. I mean, it's not like I've been stalking the guy, but I may or may not have happened by all the places my hand-to-hand combat instructor goes. I might possibly have watched as he played with the kids at the daycare and helped at the animal shelter in his free time.

I also may be obsessed with the man, but as long as my friends keep me from making drunken confessions that will only prove just how much Kross is not into me when he rejects me like a bad check, all will be fine. Until one of the other gargoyles on Terra Mortis falls asleep with a real girl and is rubble only hours later.

Suddenly, Kross's protective instincts are in overdrive, and as it turns out, that's because I'm his mate. As a member of the Regiulapis bloodline of gargoyles, I was born without the ability to scent my mate, but Kross is Bellalapis and had known since the first time we met.

Though his reason for not telling me immediately is solid and becomes more so once I meet the man who raised him, I can't help but be hurt. And it might not matter if the unknown person using forbidden magic against me succeeds in their mission to get rid of me completely.

A century is a long time to train for something, only to find out it was never meant to be in my life anyway. And that's exactly the shock I get, when I find my mate face-down on the sidewalk in front of the castle that serves as a training facility for special factions of immortal warriors.

Terra Mortis is an island in the Caribbean where that training facility is located, and it's supposed to be the last milestone before I'm sworn in as a master for the Praemani - a group of men who devote their entire life to the study of immortal history and hand-to-hand combat.

The problem is, I can't have a mate and be a master. Full devotion is needed for both. I've chosen my mate, but before I'm ready to claim him, I have to figure out who I am outside of the only thing I've ever known. And did I mention that celibacy is part of the full devotion to Praemani? So, yeah. I'm a 100-year-old virgin.

Can I convince my mate to accept me when I'm still struggling with being myself? And what if I'm the reason a practitioner of forbidden magic is targeting him? Can I forgive myself if I trusted the wrong person and my mate suffers for it? Can he?

Warning: Mpreg elements! Though the MCs in this book aren't and cannot get pregnant, this is a spin-off series from my Chosen series. Occasional mpreg characters might have cameos. You've been warned!

Author's note: My books have little to no angst and lots and lots of fluff! They are better listened to in order, because I kind of write them like a continuation of a story, and I don't like to repeat explanations over and over if I can help it.

No cheating, because that makes my heart hurt, and I try to avoid things that make me sad like I should be avoiding carbs.

Sorry, I just don't want anyone being disappointed if they like the angst-filled heart rippers. This story is more like a romantic comedy than a romantic drama. Enjoy! Blowing you kisses.

What listeners say about Corrupting Kross

If you have read the other series by this author then you might have the slightest idea what is going on in this first book. It is one thing to drop your audience in a story about shifters without a lot of world building and mostly they will be fine. There are so many shifter romance novels out there that you don't have to overly explain alot. If this series is expanding from the chosen series...then this expanded world that now goes beyond shifters, that includes Gargoyles, witches, sirens, vampires and who knows what else...needs to be explained. Unlike shifter novels...their worlds sometimes cross over to other magical, mystical, paranormal beings, but shifter novels can standalone, because some of these paranormal beings aren't overly written about, the rules are less clear. The lack of a setting up the environment and the assumptions the writer makes, makes me feel upside down. The story is confusing to me. I feel that I have been drop in the middle of a very informative conversation. I read the first series and I am still confused...and i only have 9 minutes left in the book! Also, i don't like the use of voodoo in this book as a form of corrupted/evil magic. Its shows that you don't know what you're writing about, that you are racist and mostly you fell culturally elite (you're not). The second book in this series is available is still just as confusing! I just dont how you can have a pretty decent series, and then your next series is a confusing mess! I would waste the 5$ if i were you!

Terrible narration, among other things.

I am not a fan of Kenneth Obi. I cringe every time I see him listed as a narrator, but it seems like I’ll never learn my lesson since I’m back reviewing another book that he’s voiced. Thinking “maybe he got better since the last time” is turning out to be a waste of time and money.

The story is “just okay” in and of itself—little background information about gargoyles and lackluster world-building, combined with too many characters with weird names that add nothing to the storyline. It took me awhile to figure out who the main characters were because so many strange names were being thrown around. I had to listen to the first chapter THREE times to figure out the gist of what was supposed to be happening—the weird flashback thing not helping. Just...no. I’m hoping this is a super early work of JD Light’s. Some of her other newer series would be much better served on Audible than this one—provided she can find a different narrator.

Fated mates and a voodoo doll

Kross McCabe has been training to become a master for the Praemani for over a hundred years. He was always certain the path he chose was sound - dedicate his life to combat and to the immortal history of those who came before. That is, until he meets Larrin Brenner and has to choose between the path he has chosen and his fated mate. But someone is angered by that decision, and what ensues is a battle waged against an unknown enemy who is using magic to kill Larrin and bring Kross to his knees.

This new series by J.D. Light is everything I have come to expect from her. Sometimes I was on the edge of my seat and other times I was laughing uncontrollably. There was the perfect balance of suspense and hilarity.

Narrator Kenneth Obi, a god among narrators in my humble opinion, brought the characters and their antics to life. I actually felt their joy, their fear, and their despair. Perfect!

Loved this story it was a pleasure to read but listening to it sooo good. Loved the way the narrator made the characters so much more real it was amazing starting book two sooo excited

a perfect short listen with awesome narration. I have read this book several times and when I saw it was in audio I had to snag it up. pure perfection!!

This was an excellent listen. Kenneth never disappoints. Characters were very engaging and as relatable as they could be for being a fantasy genre.