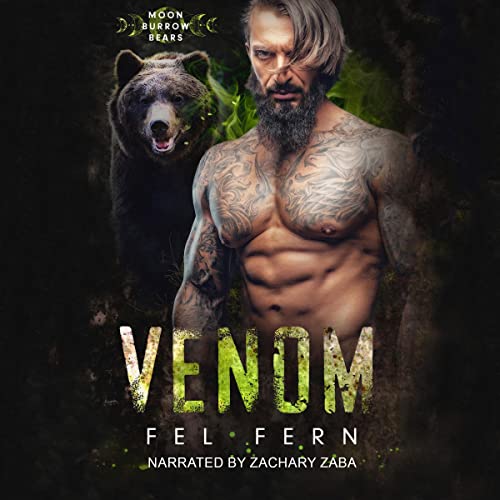 Casper’s salvation lies in the hands of a savage biker bear….

Rock bottom. Casper Holden finally knows what that feels like. He’s watched his father and brother die before his very eyes. The bloodthirsty new leader of his pride wants all the members of the Holden family dead, and that includes Casper. Hunted by the same people he once trusted, Casper has to fend for himself. But a lone omega without a protector can’t survive on his own. As Casper readies himself for death, fate assigns him an unexpected protector.

Vicious. Venom and his monstrous crew of grizzly alphas have been called worse names. A simple visit to a lion shifter pride turns complicated the moment Venom crosses paths with Casper. Casper is marked for death. His pride knows it, and so does Venom. That doesn’t stop Venom from committing the unthinkable. Venom doesn’t believe in mates. He’s incapable of love. Deep down, he knows he’s just a killer, but Casper believes he can be more.

Venom is an m/m shifter romance and the first book in the Moon Burrow Bears series. It contains mpreg, a possessive and ruthless bear who’s sweet on his mate and a happily ever-after.

What listeners say about Venom

Good, but could have used more details.

I enjoyed the book, I just thought there could have been more details about the spicy parts and some of the emotional aspects. I'm interested enough to start on the next book though. The narrator has a really nice voice too, so it was super easy to listen to the audiobook.