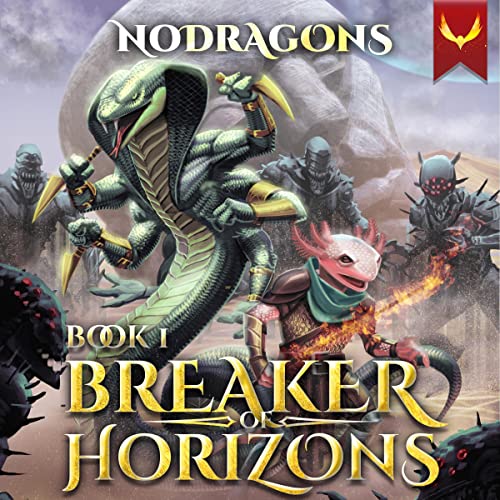 Nic has been Selected.

Chosen to leave his own body behind and become a monster.

Chosen to live or die on his own wits. His own strengths.

He'll adventure out into a new realm as a foot soldier for the System's relentless integration of new worlds. Fighting to break the natives into submission.

But Nic has never loved the System, or cared for his home planet, a depleted husk of a world that the System forgot long ago. With blue skies overhead and green forest to the horizons, he might just fall in love with this strange planet named Earth....

Don't miss the start of an action-packed LitRPG apocalypse series from the invader's perspective. A monster evolution story with elements of cultivation, base-building, ally-recruitment, a detailed System, power progression, and all the things listeners of LitRPG have come to love.

What listeners say about Breaker of Horizons

I realy liked the story but I often found myself having to go back a chapter because I had missed a chunk of story
It's good but can be hard to stay focused on.

The magic system seems to somewhat mirror "defiance of the fall", which I very much enjoy so no complaints here, but it's done from a monstrous perspective.

I hace to say, the concepts and descriptions behind each "being" is brilliantly creative. The story is brilliant, it twists and turns nicely and the medium is pretty well thought out.

My only gripe is the level of progression elements in the first half, it's a bit too much, don't get me wrong, this is logical, but there are too many treasures, or cultivation items, to track in a fully engaged way.

I enjoyed to story but if this is your first system book I believe you be confused they is so much going on its like the kept stuffing random story points cultivation/system/monster evolution/planet invasion.

This was really good

I was not sure what to expect with this book but it was very good. A similar feel to defiance of the fall but with a monster point of view and a greater underdog vibe. I really enjoyed the world created, world building and the path for growth.

The book cimes alive once the main character can speak and I find his animal companions highly evertaining I especially like Inkspur. He could have his own book and I would br happy.

The book does take a while to really get going but I enjoyed learning more about the world, the system and the chance to explore. A solo adventure is a rare treat in litrpg.

The narrator is fantastic and adds great depth to the story.

I look forward to the next book. If you like defiance of the fall you should enjoy this.

A interesting twist on a bloated Genre

Already this book earns high marks for adding something new to a Apocalypse System Lit Rpg Genre. Instead of a generic mc who lived a normal life till suddenly the world got invaded we have a total reversal of that. The Mc is a downtrodden nobody who through a lucky stroke won a once in a lifetime chance to take control of his life. . . By becoming one of the many monsters that are invading earth.
I personally like this shift in angle. He has no malicious feelings towards the humans of earth just a sort of apathy because for the mc the knowledge of what people are going through is just common knowledge and generally accepted. He doesn't have a hero complex to tear down the system all he wants is to become powerful enough to chart his own destiny which I feel is very compelling and a breath of fresh air from all the selfless suicidal burn the system to the ground hero type characters.

I'm a huge Defiance of the Fall fan and came across this book which many people recommended as somewhat scratching a similar itch.

While it has some similarities it is a very unique story and the power ups and skills are fun and are very multifaceted.

Protagonist is not super OP but he uses his skills and brain to handle a very interesting book 1.

Also while many lit rpg books feel like an arbitrary stop point this book one is a very complete story in and of itself.

Well worth the credit.

This Universe is interesting.

This is an interesting take on LitRPG or a system universe, however you prefer to think of it.

I highly recommend it, and I hope more books are written in this universe.

A change of pace in a good way.

what I see here is a great change of pace for the adventure genre.

The protagonist works for every bit of power they get and nothing feels like it happens for no reason. When they get out of trouble it feels like they earned it not because they have plot armor

This was a great story that I greatly enjoyed listening to, I highly recommend to those who like LitRPGs.

So many of the other reviews gave this good marks so I bought it. It's a huge disappointment. The main character just zips from one to the next to the next and at every turn laments how weak he was as human then how weak he is as a monster race but.. it's smoke and mirrors from the author. at every turn the character is like a one man wrecking crew army that kills everything. It's like the author was writing one story but wants to spin it a different way so it all feels disjointed. There really shallow world building that attempts to clone other books in the genre. and poorly at that. Did not find it possible to finish the book. turned it off after 7hrs and have zero interest to finish.

this is NOT defiance of the fall.. this is like a weird version of poor quality fan fiction. the main character runs around with the attention span of a kindergartener and the firepower and resources of batman fighting a street mugger but nonstop whines and complains about how weak they are. really it's like the author is confused about his own book?
I won't be finishing this. sorry to sound negative.. I JUST finished all 8 books of Defiance of the Fall and then this book was suggested and wasted my credit. it's like going from eating a prime steak to being served cold burger patties from a dumpster.

Loved it can’t wait for more from the author… the ending leaves it open for a broader story and events.

This is one of those books that is interesting enough to listen to for sure, but moves far too fast in some areas and way to slow in others. The first chapter or two before he left his home world was more interesting then some of the later content. While also being another LitRPG where the author thinks RPG mechanics have to get complex fast.

After he gets to the new world it is a rush. Fight after fight, hardly any downtime while we barely know enough about this character until later. Why someone who I thought was a young kid for a long time is more like a Young Adult but that isn't Conveyed very well. He also spends way too much time alone, and the world seems to be too early, not just due to his race and size, but just over all the story has some messy bits putting in far too many plot threads too early in the series to really grasp on to any or care about them.

Honestly feels like I missed a book with how much is just assumed for the reader to know or waits way to long to show us. I don't think I will listen to the rest of the series when it comes unless I have NOTHING else I want to listen to. Not worth getting deep into the weeds on it unless you want to piece the events and world together mostly on your own.

I normally wait until I finish the book to rate it but I already have made it far enough in to know it’s amazing! A great premise great narration and great characters! Buy this!