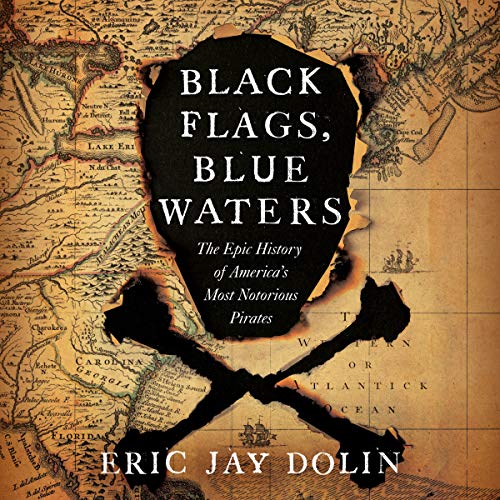 Set against the backdrop of the Age of Exploration, Black Flags, Blue Waters reveals the dramatic and surprising history of American piracy's "Golden Age" - spanning the late 1600s through the early 1700s - when lawless pirates plied the coastal waters of North America and beyond. Best-selling author Eric Jay Dolin illustrates how American colonists at first supported these outrageous pirates in an early display of solidarity against the Crown, and then violently opposed them.

Through engrossing episodes of roguish glamour and extreme brutality, Dolin depicts the star pirates of this period, among them towering Blackbeard, ill-fated Captain Kidd, and sadistic Edward Low, who delighted in torturing his prey. Also brilliantly detailed are the pirates' manifold enemies, including colonial governor John Winthrop and evangelist Cotton Mather.

Are most American narrators rubbish? STAY AWAY

Paul Brion took this interesting book, ruined it with a poor performance. Gave up after the Captain Kydd chapter, please choose better next time.
Ps the black dahlia was ruined by a lousy performance , but to be honest it wasnt as shite as this one.

good listening and narrative, covered a wide range of areas and information
good value for money.

I really enjoyed the book, however I found the narration to be uninspiring. The narrator reads as though he finds the subject to be utterly uninteresting.

Piracy at its finest

Having had little knowledge of pirates prior this provided a good insight into some of histories most famous pirates, their exploits and the men and forces that brought them down across America.

Will next be looking at the Caribbean and the republic of pirates as suggested in the final chapter. Great listen!

If this is your first foray into the history of pirates, I heartily recommend listening to The Republic of Pirates by Colin Woodard first. It's a much more engaging read, and the narrator does a MUCH better job (I swear, this narrator almost managed to make PIRATES seem boring with his delivery). After you read that book, if you're still hungry for more, than this volume is a respectable one for supplementing your knowledge. The author does present interesting history that The Republic of Pirates glossed over, including a few interesting figures left out of that other book entirely. This book just has a slightly narrower focus that I think makes it less suitable as a first book on the subject. By all means read and enjoy it (narrator aside, I certainly did), just not as your first sojourn into the subject matter.

Driest performance I have ever heard.

I have been buying and listening to audio books for 10+ years at the rate of 2-3 a month. That comes out to 240-360 audiobooks in my library.

This is by far the worst performance I have heard. The writing is interesting, but the narrator is just impossible to listen to. No expression, no excitement, no characterization, no nothing. It might as well be a computer reading.

Golden-Age Piracy from an American perspective

This book attempts to look at at golden-age piracy through the lens of how it affected the American colonies. That is an interesting perspective, and it does have some unique information that I haven't encountered in other books.

I would say that the book partially succeeds. However, since it is difficult to tell that story without also giving the background information of piracy in the West Indies, about two thirds (just a rough estimate) of the content of the book is also covered in "The Republic of Pirates" by Colin Woodard, which, in my humble opinion, did a better job of it.

There is still a decent amount of interesting information in the book. Some of the stories relayed are different than other versions I have heard, and for some strange reason, I like hearing alternate reports. Perhaps the mystery is what makes this era in history so interesting to me.

Overall, although I occasionally got tired of hearing redundant information, I am glad I picked up this book.

The first half of the book is as interesting as reading the phone book. Everything mentioned was uninteresting and forgettable. The second half become more tolerable as individual tales were presented. However the biggest tragedy of this selection is the narration. Beginning to end the narrator reminds monotone throughout. I will be avoiding other books in which he is a part of. I would rather swing from the yardarm than suffer another selection from him.

Overall the book was quite informative and well-written. The reading, however, was so soft as to be exceedingly difficult to listen to. The narrator maintained a soft conspiratorial voice that would be consistent with spooky stories around a fire, but wholly inappropriate for the relaying of historical material.

puts the arrr in boring

I listened to the sample and based off this I expected to be hearing exciting true tales from the high seas. Instead this book is like sitting in a high school history class with a boring monotone teacher lecturing about the general history of American piracy. Waste of credit and time. FFO boring history lectures only.

I couldn't finish the book because the readers voice was not engaging at all. The performance was lackluster, monotone for the most part and almost as if every single word was like whispering a secret. The subject is very intriguing. But the readers voice failed to keep me engaged.

The narrator's diction was annoying. For example "senventeen hundred" was pronouced seventennnnuh. Also the production was off. Had to turn the bass off my car to be able to understand it. Almost quit after the first 5 minutes.

In this book you will learn about how piracy effected the American colonies as well as the Caribbean. I learned things about the colonies that were not taught to me in school. The narrator did a fantastic job. He was clear and not dry.

The reader is just impossible to be interested in. monotone, maybe even not human.