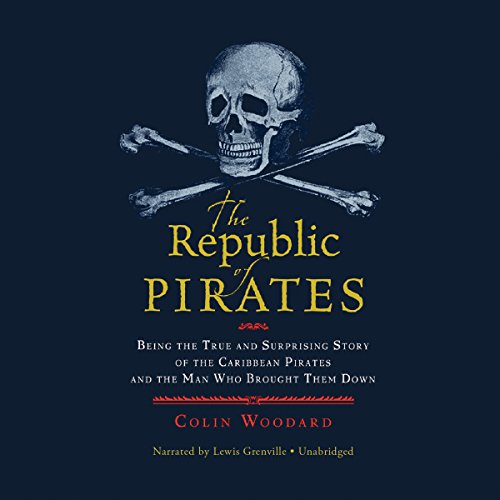 The Republic of Pirates

By: Colin Woodard
Narrated by: Lewis Grenville
Try for £0.00

The untold story of a heroic band of Caribbean pirates whose defiance of imperial rule inspired revolt in colonial outposts across the world.

In the early 18th century, the Pirate Republic was home to some of the great pirate captains, including Blackbeard, "Black Sam" Bellamy, and Charles Vane. Along with their fellow pirates - former sailors, indentured servants, and runaway slaves - this "Flying Gang" established a crude but distinctive democracy in the Bahamas, carving out their own zone of freedom in which servants were free, Blacks could be equal citizens, and leaders were chosen or deposed by a vote. They cut off trade routes, sacked slave ships, and severed Europe from its New World empires. And for a brief, glorious period, the Republic was a success.

What listeners say about The Republic of Pirates

The only thing I didn’t like was the American reader, American pronunciations to British places etc did jar somewhat. Overall a great and informative book.

Really struggled to finish it. Some interesting parts but no deep analysis, which makes it indistinguishable from the source the author has got all of his research from.

That the author just skips over major pirates (eg Bartholomew Roberts) because its outside the relam he places on himself is bizarre and has quite literally told the story of the golden age of pirates but omitting key points he doesn't 'fancy' putting in? It's weird.

As I said it leans so much on the primary source of the general history of pyrates, you're better off listening to that instead which has far more. General History will also tell you about more than just America (which was strange of this book to do so as the Republic was Nassau), you'll hear about Brazil, more of Africa and across the Caribbean giving you a more rounded view of the scope of Piracy.

A rich and fascinating story of pirate history unfortunately spoiled by poor narration and pronunciation.

AC4 fan looking for some confirmation?

I looked for a book like this because I'm an AC4 fan, this dramatised history book is enjoyable to listen to and confirms a lot of characters, events from AC4 (obviously not all events and characters) but the parallels are nice and I enjoyed this book as a result.

American narrator was OKAY, but a little dry at times. Lots of English, Spanish and French names get butchered but it's understandable.

Starts of strong, great information on 3 most notorious pirats, who they were and how they got to be as they were. However, a metric ton of name dropping, some did not feel entirely relative, thus caused me to loose track and interest towards the end.

Should you listen to it?
If its your study area and you need to know all minor trivial details: Absolutely!

If you want to learn about pirates and history: Sure but be warned.

This is the only Audible book I have listened to multiple times. I love Pirate history and this is extremely comprehensive and well read/researched. It can be very detailed at times (great for me) but nothing that detracts from an excellent place to learn all about your favourite Pirates ☠

I was expecting tales of pirates, I got facts and figures

Meh not the best audible book. There where bits that if it was a book you would clearly skim read over and move on swiftly. Unfortunately whilst driving to work in the morning and going from stories to then figures of how much things are worth gets rather drab.
I didn’t finish this book for the safety of other drivers, it was so very very boring zzzzzz. I’m a very nautical person, I work in a chandlery and yet even I couldn’t cope with how factual and number orintated this book was.

Could do with a cast sheet…

I think this book assumes you know who most of the main characters are going to be. They all have white guy names and only Blackbeard had the good graces to have a memorable nickname. Spent many chapters looking up who people were on Wikipedia.

Solidly researched, didn’t fall into the traps of retelling myths, and took the time to dispel some common misinformation.

Many poor audio issues: skipped sections, repeated sections and some moments of no sound.

If you’re just starting your own journey into the history of pirates then this book is a good place to start.

I bought this book over 5 years ago and read half of it. The book is filled with so much information that's it's difficult to keep interested while reading, but the audible version is like having your very own personal story teller. The information, when being read to, seem to sink in a lot more, opposed to reading it myself. Over all, this book really captures the true nature of our maritime history and the propaganda that was created to end the golden era of the Pirates.

If you're into pirates, you're going to love this book. It follows the lives of several of the most notorious pirates in a narrative fashion that's engaging and exciting to follow.

Where does The Republic of Pirates rank among all the audiobooks you’ve listened to so far?

This is in my top 3 of pirate history books. Very compelling and well written.

Henry Avery. His story was fascinating and it would seem he did what he thought was the right thing at the time.

What does Lewis Grenville bring to the story that you wouldn’t experience if you just read the book?

He is a very capable narrator. Clear diction, and no mouth or breath noises.

What made the experience of listening to The Republic of Pirates the most enjoyable?

Getting to know the pirates on a more personal basis than what History class taught;

Which character – as performed by Lewis Grenville – was your favorite?

if love history, pirates or both then this is the book for you. great info and we'll narrated

More Information than I expected

Would you listen to The Republic of Pirates again? Why?

Not sure if I will listen to the book over and over. I read it because I was interested in the subject. It did a good job of covering the topic and increasing my knowledge.

The pirates themselves and the way they thought were my favorite characters.

This is a history so I did not have a favorite scene.

My reaction to the book was one of interest. Governments cared and then they did not care at all about the pirates and there territories. They used pirates as they wished. They commissioned them and they hanged them. It was a risky business to be a leader of a pirate band. Communication was very slow and because of this it helped and hurt the pirates and the colonial leaders in the area.

Colin Woodard really studied the subject well. It is the best book I have read on the subject and I have read several. Lewis Grenville did a very good job of presenting the book. I am just glad I was not born during that time.

Enjoyable for fans of the golden age of pirates

Slow at times, bogged down by too much detail, the book is still a lot of fun to listen to. If one wants to know more about the golden age, it is a wealth of information, and told as the story of Black Sam Bellemy, Blackbeard, Benjamin Hornigold, Charles Vane, Anne Bonney, and Woods Rogers as well as a few others. Well worth a listen.

I've listened to 259 books in my 7 years as an Audible member, and this is only the second book I wasn't able to at least power through. The narrator has a really distracting rhythm, pausing at strange points during the reading. It's extremely unfortunate because it truly is an interesting story

Due to. the many. starts. and stops. this book. did not. flow well. It was. an. interesting . story. but due to. the way it. was narrated. it was. at times. hard. to follow.

Some Incredible Stories, Told A Bit Too Rigidly

Some incredible stories of piracy and pirate-hunting within, but falls into that nonfiction trap of over-explaining certain aspects in obsessive detail, sometimes sabotaging its own inherently interesting subject matter. This book made me appreciate Assassin's Creed IV: Black Flag a lot more, which features many of the same historical characters- I'd recommend playing through that one as you read this. Great audible narrator. [AUDIBLE]