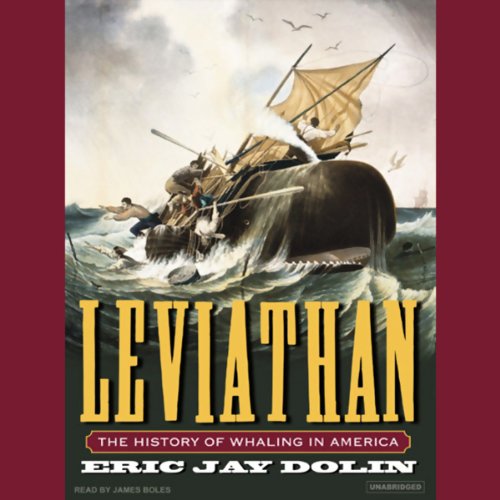 By: Eric Jay Dolin
Narrated by: James Boles
Try for £0.00

This is the epic history of the "iron men in wooden boats" who built an industrial empire through the pursuit of whales.

"To produce a mighty book, you must choose a mighty theme," Herman Melville proclaimed, and this absorbing history demonstrates that few things can capture the sheer danger and desperation of men on the deep sea as dramatically as whaling.

Eric Jay Dolin begins his vivid narrative with Captain John Smith's botched whaling expedition to the New World in 1614. He then chronicles the rise of a burgeoning industry, from its brutal struggles during the Revolutionary period to its golden age in the mid-1800s, when a fleet of more than 700 ships hunted the seas and American whale oil lit the world, to its decline as the 20th century dawned. This sweeping social and economic history provides rich and often fantastic accounts of the men themselves, who mutinied, murdered, rioted, deserted, drank, scrimshawed, and recorded their experiences in journals and memoirs. Containing a wealth of naturalistic detail on whales, Leviathan is the most original and stirring history of American whaling in many decades.

"Engrossing....This account is at once grand and quirky, entertaining and informative." ( Publishers Weekly)
"Eric Jay Dolin's Leviathan is the best history of American whaling to come along in a generation." (Nathaniel Philbrick, author of In the Heart of the Sea: The Tragedy of the Whaleship Essex)

What listeners say about Leviathan

In the beginning I thought it would be long and boring.Was I wrong. Suddenly there was a lively story. It is a history beautifully narrated in the language of the times. First it was interesting, then a fasinating chronology full of descriptive adventure. Whaling was such an important part of our heritage.

This book is an amazing piece of work, Well researched, detailed and still incredibly entertaining even when detailing mundane actions and events. I can't think of any other book with so much information all brought together so well. I picked up the printed book so as to have a reference handy.

The naration was awful, If the text had not been so incredible I would have given up within 20 mins, "William Shakespeare's Henry IV" was being quoted and was read by the narator as "William Shakespeare's Henry Four"...I mean any 3rd Grader knows to add the "th" to a title...This and many other weird actions throughout the reading made me want to fling my MP3 player aganst a wall, He repeatedly dragged me out of the story.

This is the kind of audiobook that would win awards if given a competent Narator.

I would gladly give the book 100% but this is an audiobook website and the narration drags it down hard...

The text is quite interesting. However the narrator is terrible.

Great book, easy listen. If you like history, New England, whales, or anyone from Nantucket; this is for you.

a thorough and well written history of whaling. i appreciate the Colonial historical perspective of the United states

A large and forgotten part of history

It's the story of the rise, golden age and eventual end of the industry from the earliest days of colonization to its end just after the first world War. One thing that is surprising by its absence is any mention of the environmental movement. Whaling in America had long ceased to exist by that time. Whaling was part of the revolution, war of 1812 and Civil War. I'd never heard of any of that.

well worth the listen. now I just need to hit 15 words almost there got it

this book really gives a insight of early America and the use and need of the whales and the hard work an dedication the men put in.

This is a well organized and interestingly presented history of whaling in America. I love watching whales so have always avoided this topic. But as the author points out, whaling is a far too important part of our history to be ignored. The book leaves you with an understanding of why the industry was so important and a great respect for whalers. Well read and worth every minute of time.

This author has the ability to history flow together, and I feel like am watching it with a bird eye view