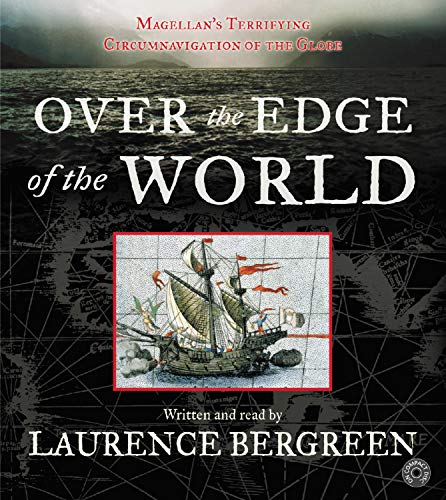 Over the Edge of the World

In 1519 Magellan and his fleet of five ships set sail from Seville, Spain, to discover a water route to the fabled Spice Islands in Indonesia, where the most sought-after commodities (cloves, pepper, and nutmeg) flourished. Three years later, a handful of survivors returned with an abundance of spices from their intended destination, but with just one ship carrying 18 emaciated men. During their remarkable voyage around the world the crew endured starvation, disease, mutiny, and torture. Many men died, including Magellan, who was violently killed in a fierce battle.

This is the first full account in nearly half a century of this voyage into history: a tour of the world emerging from the Middle Ages into the Renaissance; a startling anthropological account of tribes, languages, and customs unknown to Europeans; and a chronicle of a desperate grab for commercial and political power.

What listeners say about Over the Edge of the World

I couldn't stop listening. Well written and presented. The amount of twists and turns that the expedition went through is mind blowing. Murder, mutiny, sex, scurvy, betrayals, battles greed, hunger and adventure. It has it all. If you're a fan of history then download this book!

The age of discovery is fascinating.
This is a very good insight into that age.
Well worth a read.

There is something wrong with this audiobook, it's not the full version, and a lot is missing compared to the book.

Magellan,a voyage a wonderful tale well read. We followed his journey round the Cape on the Queen Victoria in rather more pleasant conditions.

Amazed how much detail of this epic voyage has remained to the present day. Very well presented.

I enjoyed this book very much, it conveys the horrors of the time without glorification

I bought this actually not knowing that is was part of the Audible Kids collection (I must have missed something) but figured it would at least offer a beginners guide to Magellan’s exploits. It does that, mostly relying on the diary of Antonio Pigafetta. As a result, and having done some further reading, some aspects of the journey go unchallenged such as the encounter with the ‘giants’ of Patagonia. The main issue I had though is the narrator. It’s not particularly well read with noticeable hesitations before pronunciation but certain foreign names. Makes me wonder if the author would have been better off getting in a professional voice performer rather than reading it himself. The tale of Magellan’s journey is nonetheless compelling, it’s the presentation that could be better.

A gripping account of Magellan’s and his men’s epic voyage. We hear the story from beginning to end in its historical context and with witness accounts at all the right places which brings to live in front of the reader’s eyes the incredible events during that first circumnavigation of the world. Inspiring.

The Reading IS an Issue

I read the Audiofile review for the UNabridged version (an AUDIE finalist) and then carelessly bought the abridged - read by the author - for my historian husband's post-surgery listening. The second star above is a historian's nod to content; at the end of the first hour, his verdict was "one of the worst productions I've ever heard." Specifically "Given the subject matter, surely the reader would at least make an attempt to pronounce the Spanish and Portuguese words - it's beyond awful!" What a waste of money!

Over the Edge of the World

I was looking forward to listening to this book,and then I heard the author's voice.He's the reason there are professional readers reading books to listen to.
I may never finish this book becaus eof his voice.

The Voice is NOT a Problem

I held off on buying this book for months because of the one-star rating by the listener who could not stand the author's voice. Well, I wish I hadn't waited. Sure, the guy's voice is a bit geeky, but few of us have a voice like James Earl Jones and others. Having the author read the book lends authenticity. I had no problems with it and found the book fascinating. It the subject matter interests you, do not hesitate. You will enjoy this book.

This is a great account of one of the legendary journeys of history. It tells in particular detail the story behind the first circumnavigation of the world, the discovery of the Straits of Magellan, and the travels and travails of an intrepid commander, Ferdinand Magellan, and his brave crew.
I had looked forward to this much as I had anticipated "Endurance," about Shackleton's incredible adventure. In fact, the Amazon reviews were so consistently glowing that I ordered this despite lukewarm and even negative Audible reviews. I should have trusted my fellow Audible listeners!
Believe me, I understand the tremendous research that went into this work. I read that Bergreen used translations of the original logs of the voyage as well and historical references and contemporary accounts. You can imagine my disappointment when I realized that the author couldn't read. The narration significantly detracted from the grandeur, the magic, of an otherwise flawless work.
Just as some singers shouldn't dance, some authors should not narrate their own works. Regrettably, Mr. Bergreen is one of those. My advice to Audible listeners is: "Read this one in print!."

It is as if the author published his research with out ever having the chance to sort out what is and what is not relevant or interesting. What's more, the narrators wimpy voice is perfect in catching the author's academic and pedantic tone. And wouldn't you think that the narrator would have been selected based on even a passing ability to pronounce Spanish and Portugese words and names? His murdering of the phonetics is so distracting: you wonder what the publisher was thinking.

There is no entertainment here and it is only useful if YOU are doing a term paper. Otherwise don't go near it.

The author reads this book. His voice may not be "Heston's" but his elocution and delivery were transparent to the great story. I was enthralled by the unbelievable misadventures of these 16th century "men from the moon" who dealt with their new environs with a middle age mindset. Great story. I recommend it.

NO Se Habla Espanol or Ingles

On the plus side, a descriptive window into the "Time of Discovery". I learned a great deal about Magellan and his fated voyage. If you multi-task and listen to this while on the elliptical or treadmill, you will not feel so ripped off. As a student of romance languages, I was so offended with the author's constant hacked up Spanish and Portugues... but even English was a challenge for him ... "sea-men" which came out like "semen", it was so annoying! The author overstepped in attempting to narrate. Hello?? Are there any audio editors out there???

In my opinion this is a myopic PC revisionist history piece. It is hard to see anything through Bergreen's seething hatred of Columbus. The context set by Bergreen is limited to that which matches his opinion. Much not included to paint his picture.

History has a context, facts, and events. Judgement or non-judgement should be left to the reader. History is not a narrative or a case to be tried.

I would not discourage reading this book. Read it for the pearls and poisons. I would however strongly encourage the reading of Admiral if the Ocean Sea by Samuel Morrison before or after for balance. Morrison provides full context and opposing views. While Morrison is clearly a fan, he does his best to stay with the facts. Where he renders an opinion, he lays out the array of alternate views, their factual backing, and why he supports a given theory.

Where to throw this book...

Horrible. Amateur effort to turn what would be a bad high school text book into a novel. The history is interesting but the dramatic overlay hurts the books credibility.

Excellent story that is ruined by a terrible narrator who sounds like this is his first book to read out loud. Do not waste your money on this one.