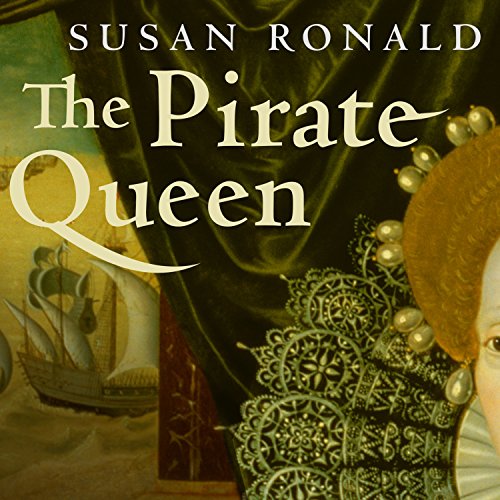 By: Susan Ronald
Narrated by: Josephine Bailey
Try for £0.00

Dubbed the "pirate queen" by the Vatican and Spain's Philip II, Elizabeth I was feared and admired by her enemies. Extravagant, whimsical, and hot-tempered, Elizabeth was the epitome of power. Her visionary accomplishments were made possible by her daring merchants, gifted rapscallion adventurers, astronomer philosophers, and her stalwart Privy Council, including Sir William Cecil, Sir Francis Walsingham, and Sir Nicholas Bacon. All these men contributed their vast genius, power, greed, and expertise to the advancement of England.

In The Pirate Queen, historian Susan Ronald offers a fresh look at Elizabeth I, focusing on her uncanny instinct for financial survival and the superior intellect that propelled and sustained her rise. The foundation of Elizabeth's empire was built on a carefully choreographed strategy whereby piracy transformed England from an impoverished state on the fringes of Europe into the first building block of an empire that covered two-fifths of the world.

Based on a wealth of historical sources and thousands of personal letters between Elizabeth and her merchant adventurers, advisers, and royal "cousins", The Pirate Queen tells the thrilling story of Elizabeth and the swashbuckling mariners who terrorized the seas, planted the seedlings of an empire, and amassed great wealth for themselves and the Crown.

"Solid...exciting...takes itself outside the usual run of standard treatments." (Booklist
"Authoritative...accessible and absorbing, this is a surprisingly fresh perspective on one of the most popular subjects of royal biography." (Publishers Weekly)

What listeners say about The Pirate Queen

I wanted to enjoy this book more than I did. According to the description, the content of the book had a balanced focus on Elizabeth and her merchant adventurers. Unfortunately, the content centered more on descriptions of ships and their captains, some familiar, some more obscure, than the queen herself. I did a good bit of fast forwarding, so maybe that part was skipped over, although care was taken not to do that!
Josephine Bailey is a wonderful narrator...easy to listen to and enjoy. She made the listen pleasant, even if the content wasn't what I was hoping for!
(A better background in Elizabethan history on my part would have been helpful!)

There are few subjects more exciting than Queen Elizabeth I and Sir Frances Drac, narrated by my favourite narrator, this book should have been a phenomenal feats of millitary excitement and adventure, but instead, what was delivered was a book focused on monetary value, and numbers, you hear the narrator painstakingly read prices of ships made and their modern equivalent, while the British social history tradition demands the treatment of History from Below, this is not supposed to be a social or economic history, ultimately, the book is a vailiant but failed effort.

Dramatically changed my perception of the Elizabethan era. This book along with Empires of the Sea gave me a much more global perspective of the period.

Very superficial coverage of a deep subject. Not even an introduction of the subject as too much left out. Does make me want to learn more, and there were enough tid-bits to whet my appetite for more. Excellant narration.

The History of Elizabeth's Merchant Adventurers

A learned yet fascinating look at what Elizabeth I had to do to defeat Philip II of Spain. (Remember the Spanish Armada?) It's about the economy and the role her "explorers" played. Lots on John Hawkins, Francis Drake, and Walter Raleigh. It's a scholarly book yet it's a pretty good story. It's full of facts and figures, so it's nice to have the book nearby. It's a wonderful way to learn history. A bodice ripper, it isn't. Elizabeth was more than just a romantic figure, she was a cagey monarch. This book tells the story of the men she used to achieve her economic and political ends.