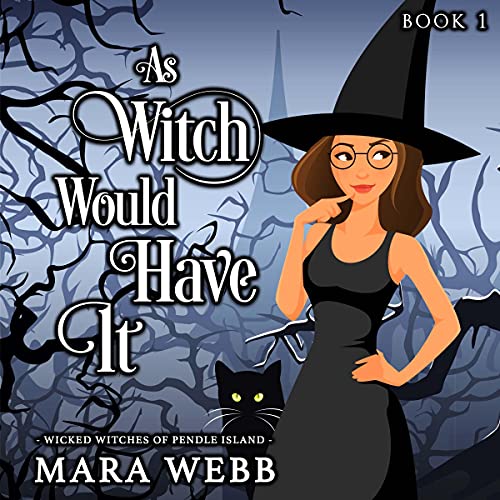 As Witch Would Have It

By: Mara Webb
Narrated by: Abigail Linhardt
Try for £0.00

When real life gets too hard Chelsea decides to fly back to Pendle Island, a place she has not been since she was born. She’s looking forward to a vacation, but when she arrives, she’s quickly thrown into mayhem. Her Great Aunt Griselda has died, and Chelsea is needed at the funeral.

She’s barely halfway through a stack of breakfast pancakes when her cousin Lizzy drops another bombshell. Chelsea is a witch, and her Great Aunt didn’t just die. She was murdered.

Things go from bad to worse when Chelsea and her cousin start to follow the breadcrumbs. Her Great Aunt had been an infamous miser and hated by just about everyone on Pendle Island. Witches don’t get much more wicked than Griselda.

After an ancient legal loophole leaves Chelsea as the sole heir of Griselda’s estate, she suddenly finds herself in charge of a haunted house on a hill, home to a mad pirate ghost, a talking cat, and a burly lumberjack with a curious secret.

If that wasn’t enough, she’s got a dreamy sheriff to contend with, and a silver-tongued lawyer who is as charming as he is cunning. It’s a lot to process, especially when Chelsea learns about a family curse dangling over her head. The last thing she wants is to end up like her man-eater mother, but it seems she can’t help attracting attention...

With a curse to run from, a murder to solve, and a needy cat to please, Chelsea finds her plate fills up very quickly. There’s also the small matter of avoiding death and learning magic, but that’s easy enough. Right?

As Witch Would Have It is the first book in the Wicked Witches of Pendle Island mystery series. It’s fast, funny, and may contain a sassy animal or two.

What listeners say about As Witch Would Have It

A different take on witch craft

I liked this book and think it makes a great start for a new series. Mainly because I liked the idea of the different witches and how they get there powers, it made for a different listen. I especially liked the way the murder victim was mean to somebody and it brought them good luck, a novel idea and a lot of fun but that's not the only type of witch involved in this humours mystery. The main characters power, which isn't revealed until near the end of the story, sounds like it could get her into a lot of trouble but be fun for the reader or listener. The mystery was interesting but I did know who the killer was, so it could have done with a few twists but still enjoyable. The characters were fun if a little quirky and I think it will be a series I would visit again.
Down on her luck Chelsea decides to return to her home town to visit a cousin she has never met. Apon arrival she finds out she is just in time to attend her great aunt's funeral. She is shocked to learn that she is the sole heir to the dead womans property but that is nothing compared to talking to her cat and having him respond. Chelsea comes from a long line of witches and with a simple name change, she to will come into her powers. When Chelsea and her cousin receive a very unusual message from there Aunt before she died, it leads to the body being exhumed and a murder investigation is launched. Who would want to kill there great Aunt? It turns out to be a very long list and not very many people had anything nice to say about her. Chelsea will have to quickly learn about magic of she plans to stick around and solve her great aunt's murder but will doing so put herself in danger?
I liked the narrator but I think the editing might need to be looked at. A few times in the first couple of chapters words or sentences were repeated but not sure if they were mistakes or part of the story. Otherwise I enjoyed her retelling of the mystery.
I was given this free review copy audiobook at my request and have voluntarily left this review.

This was a great introduction to a fun cast of quirky characters. The narrator was did a fantastic job of bringing the story to life. Can't wait to listen to the next adventure.

the narration was spot on giving each character a unique voice. The story was fun.