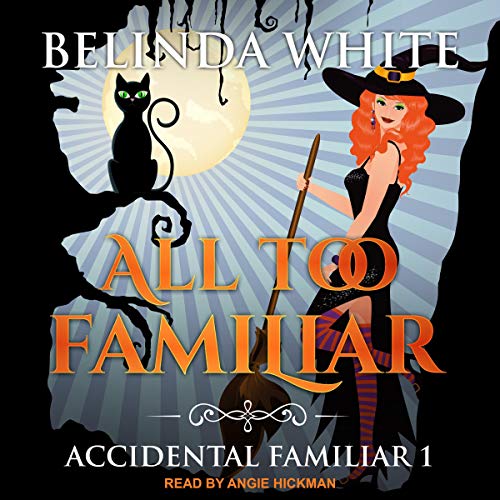 By: Belinda White
Narrated by: Angie Hickman
Try for £0.00

A familiar is a life-long companion. Choose wisely.

It's hard being the youngest in a family of witches known for their power. It's even harder when that magical power has all but passed you by. Still, I was doing okay for myself. I like to think I was proving to the rest of my family that magic wasn't a requirement to living.

Then Aunt Opal became the prime suspect in a murder investigation. Wouldn't you know it would happen right when everyone else in the family but me was out of town.

Now it's up to me to prove her innocence, and a little magic could go a long way in helping me do that. My aunt's been after me to get a familiar for quite a while now. They are known for helping a witch channel her power and even strengthen it.

So, want to or not, allergies or not, I did it. I went to an animal shelter and found my familiar. A cute little black kitty. The allergy medicine companies were going to love me. But for some reason, this little guy didn't make me sneeze. Kind of weird, actually. Not that I was complaining.

I just really wish I'd known more about him before I did the binding spell....

What listeners say about All Too Familiar

Easy to listen to, good characters and as always a puzzling murder mystery to solve.

I loved this first book, and can't wait to read/listen to another! perfect companion for knitting or driving. The narration by Hickman is perfect for this series ("Crap on toast " being my favorite quote!)
and I look forward to more of her narrations!

The story is very interesting and The voice acting is very well done however The writer definitely rushed this book and considering the length of the next books, she probably rushed those as well. there are many scenes where instead of recapping and she just says and then I told them everything that happened. like I don't like it when books recap a whole bunch, but just a brief recap is a good way to flush out conversation between two characters as well as the fact that she very much wanted this to be a mystery book, but it is extremely obvious. I was literally 100% sure on the killer after the first 45 minutes after the person died also the whole relationship between her and the cat then really get flushed out enough. so overall about a 3.5 out of five

Simple, uncomplicated story, that was pleasant and I had fun listening. Narration is also pretty good. I liked the characters, the plot.

Great start to a new series

Belinda White has crafted great beginning to a new series. The characters are interesting as seen as though you’d want them among your friends. I look forward to the next in the series.