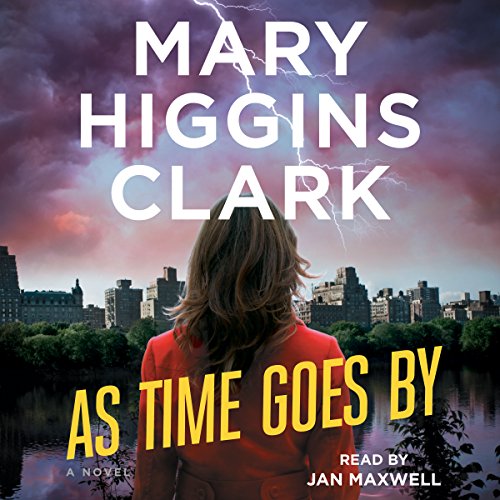 As Time Goes By

In this exciting thriller from Mary Higgins Clark, the number-one New York Times best-selling "Queen of Suspense", a news reporter tries to find her birth mother just as she is assigned to cover the high-profile trial of a woman accused of murdering her wealthy husband.

Television journalist Delaney Wright is on the brink of stardom after she begins covering a sensational murder trial for the six p.m. news. She should be thrilled, yet her growing desire to locate her birth mother consumes her thoughts. When Delaney's friends - Alvirah Meehan and her husband, Willy - offer to look into the mystery surrounding her birth, they uncover a shocking secret they do not want to reveal.

On trial for murder is Betsy Grant, widow of a wealthy doctor who has been an Alzheimer's victim for eight years. When her once-upon-a-time celebrity lawyer urges her to accept a plea bargain, Betsy refuses: She will go to trial to prove her innocence.

Betsy's stepson, Alan Grant, bides his time nervously as the trial begins. His substantial inheritance hangs in the balance - his only means of making good on payments he owes his ex-wife, his children, and increasingly angry creditors.

As the trial unfolds and the damning evidence against Betsy piles up, Delaney is convinced that Betsy is not guilty and frantically tries to prove her innocence.

A true classic from Mary Higgins Clark, As Time Goes By is a thrilling story by a master of the genre.

What listeners say about As Time Goes By

tried to have 3 back stories, should have stuck to two

I loved it and just couldn't stop listening to it. I know I'll have bags under me eyes from staying up so late. But I don't think I've read(when I used to read books) any Mary Higgins Clark's books I didn't like.

This was great! A straight story with no fluff or filler. I think this might me my new favorite author!

A lot of recycled plot points...

This was the least original of any of MHC's works--in fact, it was weirdly similar to one she wrote a few years ago--spouse with early onset dementia murdered, caregiver spouse blamed (it was the reverse in her prior book) and a thief in the house that night that has new information. So it was predictable, been written before (but clearly by someone else as this had a distinctly different/more modern voice). Jan Maxwell was fine as the narrator and it was entertaining enough, but overall, It felt like something I'd heard before.

Would you recommend this audiobook to a friend? If so, why?
Yes, it is entertaining listening

Who was your favorite character and why?
N/a

What does Jan Maxwell bring to the story that you wouldn’t experience if you just read the book?
Reads book while I do other things.

Did you have an extreme reaction to this book? Did it make you laugh or cry?
No

Any additional comments?
Not as good as some of her others with respect to mystery, still enjoyable story.

$4 sale book from series sale. Jan Maxwell is a good narrator and I first heard her in Sandra Browns’ the Switch, NOT to be missed. Great mystery and story telling.
I am a hit and miss listener of Ms Clark. Of course I love the books Ms LaVoy reads, my TOP fave CAN’T TAKE MY EYES OF YOU.
It will entertain you but also steal your heart as our young hero just plain steals it.
This series has mixed reviews by unknown reviewers so I took a chance, and I found this story to be entertaining as a good mystery should be. I purchased 3 more in the Alvera and Willy series as the $4 price was too good to pass up. I was truely surprised that these two characters are not featured, but actually line up as secondary characters. They bring the story along and the author cleverly uses them as a book binder in the series, at least in this story.
Were my comments of help?

One of her Best

As all of Mary Higgins Clark books, As Time Goes By has an Excellent story. With the audible version allows me to listen to the story without having the book in my hands. Thank you Ms. Clark.

The two stories were brought together extremely well. I enjoyed it so much.

Kept me on the edge of my seat

This book kept me engaged. I honestly didn't know who was the murderer until close to the end of the book. I would definitely recommend this book.