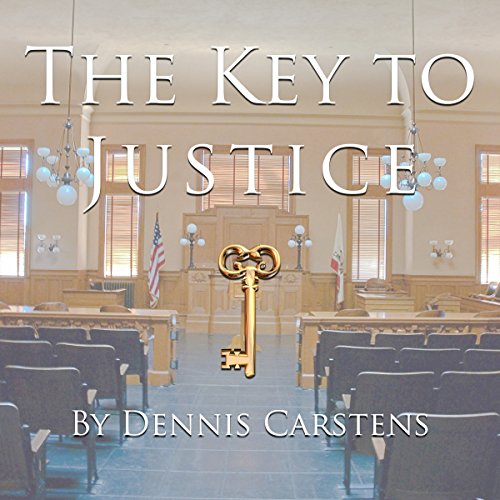 The Key to Justice

By: Dennis Carstens
Narrated by: Randal Schaffer
Try for £0.00

I try to create a story that is entertaining, interesting and most importantly, thought provoking. I want to create something that gives the listener a legal, moral or ethical dilemma to think about. In doing so, as in real life, I may not have every little detail wrapped in a nice, neat bow at the end. However, I do believe the listening experience is well worth the ride.

A serial killer is on the loose in Minneapolis and the head of the investigation, Minneapolis police Lt. Jake Waschke, is feeling the pressure to find him. To make matters worse, the killer strikes again, this time across the river in St. Paul, and his victim is the daughter of a prominent politician.

Just when the investigation seems to be going nowhere, the police catch a break when the killer strikes yet again, except this time there is a witness who gets the police, including Jake Waschke, chasing the killer through the streets of Minneapolis. During the chase Jake gets a good look at him and realizes his problems are only beginning when he recognizes the man and realizes he must do whatever is necessary to protect him.

A patsy is found and an arrest is made. The patsy's fate is placed in the hands of criminal defense lawyer, Marc Kadella, when the brother of the accused turns out to be a former client of Marc's. The case has heat and publicity far beyond anything Marc has ever dealt with and he tries to beg off. He knows he is over his head with a case of this magnitude and also realizes it could destroy his practice and drive him into bankruptcy. The brother convinces Marc to take the case playing on their past relationship, guaranteeing payment of his fees and Marc's own belief that the man is innocent.

As the case progresses, Marc, aided in the investigation by a stunningly beautiful private investigator, becomes more and more convinced his client is being framed. But, unless he can uncover who is framing him and, more importantly, why, an innocent man is going to take a very serious fall, and Marc will be helpless to prevent it.

The Key to Justice is a work of fiction that the author undertook to give a more realistic view of the practice of law and what a lawyer goes through than is usually found in most legal thrillers. It is not an easy way to make a living but it can be very rewarding though not always easy on the soul and the lawyer's private life. Whether the lawyer practices on his or her own, in a small firm or, maybe especially, a large firm to which you almost become enslaved, though well compensated, it can be a demanding, all-consuming, pressure-filled way to make a living.

What listeners say about The Key to Justice

I liked the story, but the narrator is laughably bad. Just horrible.

The main character had the most annoying voice of all. The other voices were just variations of that voice. No range.

Was The Key to Justice worth the listening time?

Yes - if you can ignore the narrator

I liked the story, but the dialogue between the main character and his girlfriend AND the dialogue from the female detective could have certainly benefited from a woman's touch.

I found this book entertaining, but it did seem to drag on a bit in the middle. The narrator saves the book with his sexy voice though. Call me! Xoxo

Didn't Do It for Me

What would have made The Key to Justice better?

Serious editing. The language in this book did not flow well at all.

What could Dennis Carstens have done to make this a more enjoyable book for you?

Carstens wanted to show that the legal profession is more dull than glamorous, and he succeeded. The plot should have been much tighter.

The sentences were not easy to read, and the narrator did not help. He did give different voices to different characters, but his reading of descriptive sentences and the "he said" and "she said" were painful to hear.

The key to justice

Well kind of interesting, however where is book two? Not nice to be unable to complete the story

Great book & narrator! It's a must listen. I would definitely recommend this book to everyone 👍