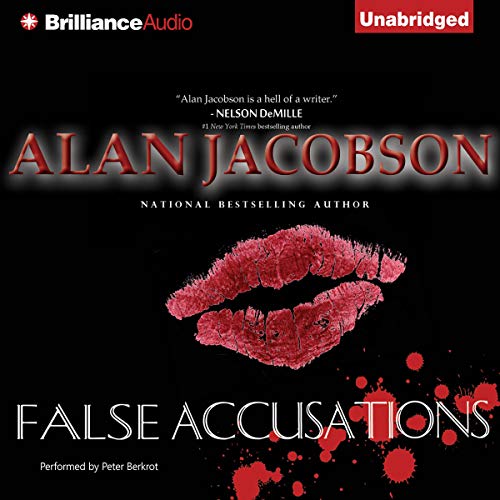 By: Alan Jacobson
Narrated by: Peter Berkrot
Try for £0.00

Dr. Phillip Madison has everything: wealth, power, and an impeccable reputation. But in the pre-dawn hours of a quiet California suburb, the revered orthopedic surgeon is charged with double homicide - a cold blooded hit-and-run that has left an innocent young couple dead. Blood evidence has brought the police to his door. An eyewitness has placed him at the crime scene…and Madison has no alibi.

With his family torn apart, his career forever damaged, no way to prove his innocence, and facing life in prison, Madison hires an investigator to find the person who has engineered the case against him. But what he uncovers may be more than anyone imagined.

False Accusations is a psychological thriller that instantly became a National best seller and launched Alan Jacobson’s career, a novel that spurred CNN to call him, “One of the brightest stars in the publishing industry.”

What listeners say about False Accusations

This was my first Alan Jacobson book, so I wasn't sure what to expect. I was about half way through, thoroughly enjoying it -- really enjoying it! -- when I decided to look at some customer reviews, to see if everyone else had liked it as much as I did. They did -- except for a significant number who complained about the ending.

So for the rest of the book, I kept trying to figure out: what could possibly happen that would be such a surprise -- and not universally popular -- ending?

I just finished it. Now I know. It's a shocker, that's for sure. I didn't see that coming. But it's not at all inappropriate -- it's a fine ending. One I won't forget, that's for sure. I thought the whole thing was rather well done, including the ending.

All in all, it's a good listen. There was never a time when I was 'away with the fairies' -- I was stuck to it, every minute. One of those where I invented things to do so I could keep on listening. If there was a slow spot, it was three-quarters of the way through, in the trial scenes, we (and the jury) are lectured on more about DNA than any of us have heard since the OJ trial. That was overdone. Then too, the book will drive lawyers nuts. There's more 'bad law' per page than you could shake a stick at, so around the world, no doubt, there are lawyers suppressing the desire to jump up and shout "Objection!" every few minutes.

But really, this is fiction. It's fine. It's not real. It's a good book.

This title had an unnerving resemblance to reality for me.
The accusations I encounter are not as sensitive as the ones in this story and they don't have the same dire consequences for the accuser or the accused, but they are wrapped-up in the half-lit world of gender politics, political fence-sitting and academic consequence.
The investigative, expert analysis rings bells too, as does the courtroom drama.
So, it had the comfortable feel of the familiar, the uncomfortable feel of the delicate and the academic appeal of searching for the truth.
That said, I am afraid I picked the twist about an hour in. I am not sure if it was the familiarity of the background material alone. Certainly it was not my personal experience. But somehow I just knew. However, given the reviews and the popularity of the title, I don't know that one should read too much into that, but I would have preferred not to know.
As for the performance, I thought Berkrot was good. His voices were familiar, believable and appropriate.
Overall, it is worth the adventure.

The narration was annoying at best, but it really all comes down to the story.

Unlike Beach Road there was no, "Oh my God, didn't see that coming". What bothered me most was that even though I could see the result there was no point in the set up... Why would this great guy resort to the setup? Were we supposed to believe that he did have an affair with her? Was it implied? It was so far reaching and implausible, I could not suspend enough reality to take in the story.

The story moved well enough, but it was too obviously setting up the end game.

I could not get into the story. It sounded so much of "deja vu" with rather trivial characters and dialogues going nowhere. The reader was a real turnoff and made difficult for me to get involved from the beginning .