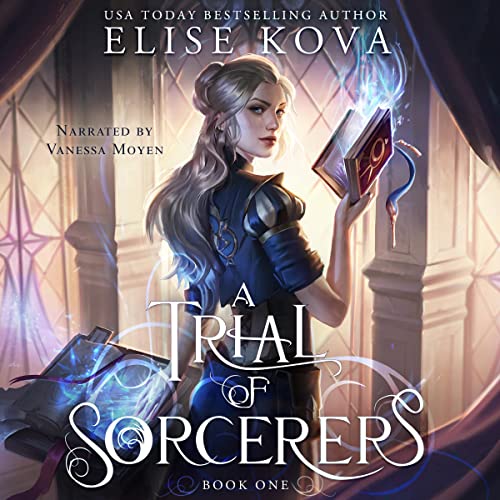 A Trial of Sorcerers

By: Elise Kova
Narrated by: Vanessa Moyen
Try for £0.00

Ice is in her blood.

Eighteen-year-old Waterrunner Eira Landan lives her life in the shadows - the shadow of her older brother, of her magic’s whispers, and of the person she accidentally killed. She’s the most unwanted apprentice in the Tower of Sorcerers until the day she decides to step out and compete for a spot in the Tournament of Five Kingdoms.

Pitted against the best sorcerers in the Empire, Eira fights to be one of four champions. Excelling in the trials has its rewards. She’s invited to the royal court with the “Prince of the Tower”, discovers her rare talent for forbidden magic, and at midnight, Eira secretly meets with a handsome elfin ambassador.

But, Eira soon learns, no reward is without risk. As she comes into the spotlight, so too do the skeletons of a past she hadn’t even realized was haunting her. Eira went into the trials ready for a fight. Ready to win. She wasn’t ready for what it would cost her. No one expected the candidates might not make it out with their lives.

A Trial of Sorcerers is the first book in a brand new, young adult, epic fantasy series intended for listeners who love stories involving: sorcerer competitions, slow-burn romance, adventures to distant lands, and elemental magic. The story is set in the Air Awakens universe, but is it’s own unique story. Listeners new to the universe can start here!

What listeners say about A Trial of Sorcerers

Read Series in this order

When looking up which books to read first the Author states each book stands alone in the same universe, but the beginning of this book has SPOILERS for the series published before it.

Read series in this order for best experience (opinion).

I really enjoyed the read. I can’t wait for book two and Ira’s next adventure.

The story is good. I guess it will get better as the story starts to unfold in the following books. The reading, however, was another story. I found it so choppy and fast or hurried that I had to reduce the speed to understand the spoken works better and to had a better intonation of the reading.
After reducing the speed, I found the audiobook more enjoyable.

Lots of plot twists at the end. Surprised me Elise Kova does a lot of tragedy in her books. I sometimes wish the main characters could catch a break. Good addition to the air awakens series.

Loved coming back to the Air Awakens realm

Great start to a new series! Loves getting back to the Air Awakens realm.