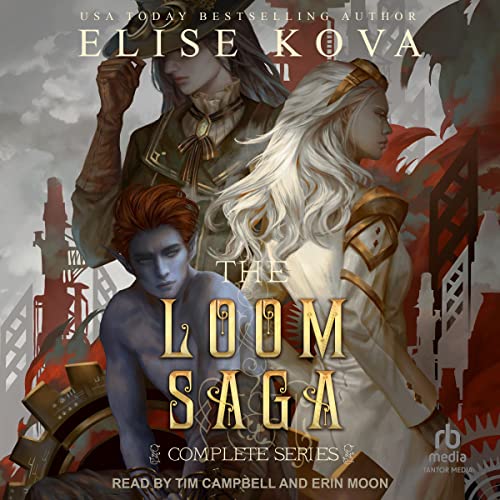 By: Elise Kova
Narrated by: Tim Campbell,Erin Moon
Try for £0.00

Perfect for fans of Mistborn and A Game of Thrones, this dark fantasy about a magical engineer turned thief has listeners raving.

The Dragon King rules with an iron fist and one woman has vowed to be his demise.

After a bloody conquest, the world of Loom is now ruled by Dragons. They oversee those beneath them from their sky cities with magic and cruelty.

Arianna is known as the White Wraith; an unscrupulous thief who will do anything as long as it defies her Dragon oppressors. She's spent her life working in the shadows, harboring a secret that would have her killed. A secret that will bring the Dragon King to his knees.

Joined by a trigger-happy gun mage and a Dragon prince who seeks to assassinate his king, Arianna sets out on an epic journey. The unlikely trio is Loom's last hope for freedom. But, for Arianna, this mission is personal. This is her last shot at redemption . . . and vengeance.

What listeners say about Loom Saga

Maybe I will return to listen to a few hours of this series every now and then but ultimately I find this series totally unfulfilling and I’m writing this review with 18 hours to go. The Protagonists are largely forgettable and the split perspective of this series does nothing to help that. I found myself wanting to skip the chapters of some characters because they were so pointless and were explaining information the audience already knows. I really wish that Florence had died in the first book somehow, I despise her.

I find both Arianna and Cvareh boring, their relationship is unconvincing and so are their motivations. Even though they don’t get together until the second book, I still feel like that was far too quick for them, I couldn’t convince myself that Arianna actually liked her partner. I’m still convinced that she must be using him (though that doesn’t make sense narratively). I don’t understand what they are trying to achieve and I feel like that should be the most important thing for the writer to make clear.

Where I am at, Arianna is in Nova to ascertain the character of Cvareh’s sister, obtain some unknown ingredient, and get revenge on some unknown dragon (pretty obvious who)? And she’s going shopping with Cvareh? And she needs Dragon hands so she can Illusion herself? And why does Cvareh need an army of Perfect Chimera to take over Nova? When it’s cannonical that his sister could just take over by duelling the King? The reasons why she doesn’t don’t seem to be explained? The questions are never ending, but I don’t feel any urgency to keep reading to have it explained.

The worlds of Loom and Nova are both kind of interesting but I found the inner mechanisms of the worlds unbelievable. Loom has a society that was built on the apparent mass-breeding of “the best” of their society all on one specific island and it makes me wonder about possibilities of in-breeding, how it would be possible to quantify the best breeding stock, STIs etc. while Nova as equally opposite and perplexing ideas of absolute family loyalty to the point where a character over hears a *minor* insult and attacks the person speaking during a covert mission. Bizarre world building that needed more care to be convincing. I did quite like the magical-steampunk setting though.

Super disappointed because I do like other books by Kova, I guess they can’t all be winners though!

I loved the performance and the characters

Both performers made this an Emerson’s experience. The characters were well developed and the imagery and content flowed. Lots of twists. I will miss the adventure of this story now that I am moving on to another book.

This book was great! But I have to say that the ending left me wanting.

I enjoyed this series very much. It had all the components I like with fantasy action, adventure & romance. The overall score is because I did have a couple of complaints about the style. The storylines would bounce around between character POV‘s which would drive me insane. And in some of the scenes the wording became verbose and flowery to such an extent that I felt it was insincere, I felt
it was just an attempt to impress the reader and not tell the story. Plus there was a lot of attention to some of the characters that I wasn’t interested in, especially in the last book. The focus on these characters didn’t really add to the story as far as I was concerned. I really enjoyed the narrators - they performed very well, very realistic.