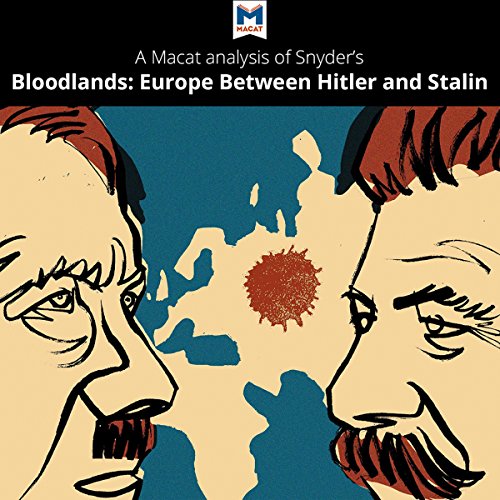 A Macat Analysis of Timothy Snyder's Bloodlands: Europe Between Hitler and Stalin

US-born historian of Europe Timothy Snyder first published Bloodlands: Europe Between Hitler and Stalin in 2010. In it, he argues that previous accounts of World War II have kept Nazi and Soviet crimes unduly separate, with much more attention paid to Adolf Hitler's atrocities than Joseph Stalin's. Snyder's view is that a definitive history of the period must depict the suffering of all of the conflict's victims.

Snyder coins the term "bloodlands" to pinpoint Poland, the Baltic states, the Ukraine, and the eastern edge of Soviet Russia, while claiming it was the people in these territories who suffered the most during the conflict. Why? Because they endured three separate, brutal, and bloody invasions - first by the Soviets, then by the Nazis, and then again by the Soviets.

Using an impressively vast amount of archive documentation and secondary literature in 10 different languages, Snyder pieces together a wide-ranging story that demands we reframe the ways we think about World War II and the Holocaust.

Bloodlands has been translated into more than 30 languages and has won numerous prizes, including the Leipzig Prize for European Understanding.

What listeners say about A Macat Analysis of Timothy Snyder's Bloodlands: Europe Between Hitler and Stalin

Transnational, Timothy Garton Ash, born in 1969, links the Soviet killing to that of the Nazis .... Bloodlands is the area between .... need I say more?? This should be 50% shorter. You've got to wade through a lot of minutes to find a nugget and something that's not repeated ad nauseam. Best to read the book 'Bloodlands' (Did I tell you where this is located?) and a few newspaper/academic reviews and make up your own mind.