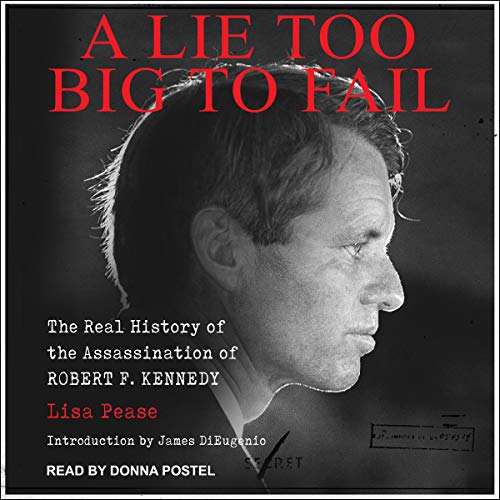 A Lie Too Big to Fail

In A Lie Too Big to Fail, longtime Kennedy researcher (of both JFK and RFK) Lisa Pease lays out, in meticulous detail, how witnesses with evidence of conspiracy were silenced by the Los Angeles Police Department; how evidence was deliberately altered and, in some instances, destroyed; and how the justice system and the media failed to present the truth of the case to the public. Pease reveals how the trial was essentially a sham, and how the prosecution did not dare to follow where the evidence led.

A Lie Too Big to Fail asserts the idea that a government can never investigate itself in a crime of this magnitude. Was the convicted Sirhan Sirhan a willing participant? Or was he a mind-controlled assassin? It has fallen to independent researchers like Pease to lay out the evidence in a clear and concise manner, allowing listeners to form their theories about this event. Pease places the history of this event in the context of the era and provides shocking overlaps between other high-profile murders and attempted murders of the time. Lisa Pease goes further than anyone else in proving who likely planned the assassination, who the assassination team members were, and why Kennedy was deemed such a threat that he had to be taken out before he became President of the United States.

What listeners say about A Lie Too Big to Fail

Great book with fantastic detail on all facets of this case. Very well researched & informative. would love to listen again now!!

When you hear that Sirhan Sirhan wasn’t the killer of Robert F Kennedy, knowing what happened to his brother, President Kennedy, you assume foul play was likely. What has been implied is that Thane Eugene Cesar was the actual killer. However, the whole thing is so much deeper and complex than that, the number of people involved was vast and the lengths people have gone to cover it up are staggering. By half way through the book you are left in no doubt it was a conspiracy involving multiple people but, what is interesting is the people who were involved and how they went about it. Everything leads to the CIA and corrupt police work. RFK was a threat to continuing corrupt and to those responsible for his brother’s death in Dallas, 1963. What a price this family paid for being idealists and showing compasion.

A Lie Too Big To Fail is an incredible work. The level of detail it goes into is immense and it is presented in an engaging and interesting manner. Anyone who reads/listens to this book will seriously question why Sirhan Sirhan is still in prison. Even with the authorities destroying evidence and appearing to tamper with other evidence the case is set out very clearly as to what very likely happened. Donna Postel does an amazing narration, she is the best narrator i have heard so far. If interested in RFK this book is a must buy.

A lot more than conspiracy theory???

Pease focuses on an American government agency skilled at managing the media and the politicians. Not to mention, if you believe her, there’s an agency that answers to none.

She puts Kennedy’s killing into context - just one of a string of assassinations!

A book too brilliant to go unread!

A most riveting read and clearly researched with such bravery, skill and devotion to her craft. Lisa Pease may I thank you for this book. A lifetime’s achievement by any standard. Your care and attention to detail is so refreshing in these times. This book should be a compulsory read in every school - not just in the USA. Truth must out eventually and let us hope that Sirhan is released soon.

Scary that the CIA got rid of another Kennedy

Just mad that the CIA could murder the President to be just like his brother, because they didn't share the same view of world politics. The CIA were out of control and it is incredible that the official line is still maintained that lone assasins were responsible. The truth really is always stranger than fiction. Poor Sirhan Sirhan still languishing in jail since 1968.

This book explains so much about how the people in power get there: Don’t rock the boat.

The Truth Everyone Must Learn

Perhaps the most enlightening exposure to a crime of such profound impact as to irrevocably alter the destined arc of our country. And this is my observation from the first listen. The next two or three hearings I predict shall further advance my appreciation to: 1) the unquestionable importance to American democracy RFK's UNSOLVED murder represents, 2) the unequivocal importance to American history the author represents.
Having read 10MM+ words concerning "the Assassinations" (JFK, MX, MLK) I find A LIE TO BIG TO0 FAIL totally engrossing, masterfully assembled and most accessible for anyone who wishes to know: the truth everyone must learn.
Lisa Pease, your contribution to the American Experience cannot be overstated.
Thank you.

Well researched. I’ve studied the CIA assassinations for 60 years and learned new things from this book. The last 12 minutes, as the author brings it all together, was haunted by drop outs and recordings from a different book by a male voice. Very disturbing.

This book is preposterous. It’s like fairy tale written by a High School junior. I’m shocked any publisher would print. Careless,frivolous,and stupid.

Great until the last 10 mins

Some word book was overlayed in the lat 10 mins of this book and I was super disappointed to have listened to it and have the conclusion muddled. Other then that a great listen

The narrator was horrible. If another narrator did this I bet it would be a fantastic listen.

A STORY NOT WORTH 10 CENTS

Don`t waste your money on this book. This author is just another conspiracy nut...

It’s not absurd that RFK was murdered by the national security state. It is, however, absurd that the author thinks that the Kennedys were some kind of progressive heroes. They were not. At best they were borderline liberals who were stewards of the empire and elite interests. That doesn’t mean that the unhinged right didn’t see them as communists, but those nutjobs have never been a good arbiter of reality. Anyway, the Kennedy worship is irritating, misguided and absurd.

really good, thought provoking and thorough....a must read, sirhan sirhan is innocent and should be free

A slog too dull to finish

Every step forward is anchored by 3 tangents involving people who bring nothing to the story, never to be heard from again. RFK seemed like a great guy for a politician, but the author nearly worships him. Come on.

inescapable accounts and evidence. sad and frustrating. many gaps filled in. a good read-listen