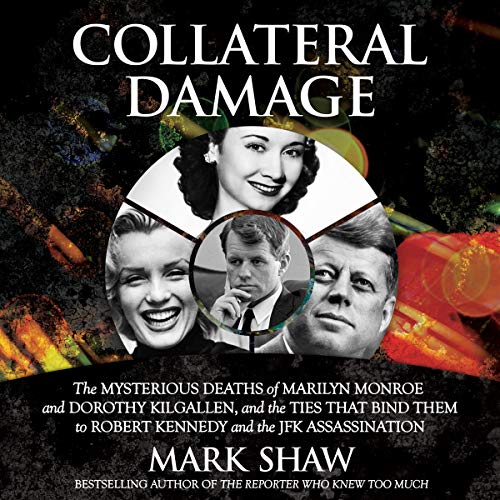 If there had been no cover-up of Robert Kennedy's complicity in the murder of Marilyn Monroe in 1962 and he had been prosecuted based on compelling evidence at the time, the assassination of JFK by Bobby's enemies would not have happened - changing the course of history and preventing the murder of media icon Dorothy Kilgallen.

In a breakthrough book that is sure to be relevant for years to come, best-selling author (The Reporter Who Knew Too Much) and distinguished historian Mark Shaw investigates the connection between the mysterious deaths of motion picture screen siren Marilyn Monroe, President John F. Kennedy, and What's My Line? TV star and crack investigative reporter Dorothy Kilgallen. A former noted criminal defense attorney and network legal analyst, Shaw provides an illuminating perspective as to how Robert Kennedy's abuse of power during the early 1960s resulted in the murders of Marilyn, JFK, and Dorothy.

What listeners say about Collateral Damage

Informative but one track

Great narratiion. Very informative but exclude key details and sticks with one theory and timeline without thorough dismissal of other theories. I know more about M and JFK theories but lack of consideration in any meaningful way of alternatives there makes one question accuracy of DK. Also a bit repititive filler. Bur still a very good book that should be Read particularly as DK deserves much more coverage and hence this text is welcome.

Was enjoying the book until the author went on a tangent about President Trump. Even going so far as imply President Trump wealth was gained by illegal means. Should have just stuck to the subject.

In 1965 I was newly married whose Uncle was the caretaker for the Bates ranch in Gilroy Calif. They commented that they heard a helicopter come and go the night before Monroe died. The Kennedy family was there. They also commented about the car driven by Kennedy. A station wagon they referred to as a "Woodie".
After JFK and RFK were killed I read numerous books about the murders. Many that this book mentions.
I came to the same conclusions the author did.
The only thing that drove me crazy was the readers pronounce of Melvin Belli. Not Belly Belli. My mom had a friend Pat Montendon who was married to him for a short time , she always referred to him as Belli not Belly.
Although, I didn't know much about Killgallon, except for her TV show "What's my Line" I submit that the author proved his case.
The authors research is impeccable.
Well worth the long read.

I wanted historical facts not the authors personal opinions on Trump . I stopped listening and will not finish it

Goes down way too many rabbit holes

What does Trump have to do with any of this? The author uses this as a way to criticize Trump and gives way too many unnecessary details on everyone- this book could’ve been half as long with all the pertinent information.

Mark Shaw has produced the best researched volume of this or in reality any year! Weaving the truth connecting the deaths in a period of 40 months of Dorothy Kilgallen, Marilyn Monroe and JFK into a murder mystery where truth is absolutely stranger than fiction. I hope Mr. Shaw with the help of Gianni Russo can bring the light of truth into these deaths. The book is a page turner filled with the passionate research of a man possessed to bring Justice to the greatest coverups of all times!

This is the third Mark Shaw book I have read about Dorothy Kilgallen. I grew up watching Dorothy Kilgallen on What's My Line and am fascinated by her mysterious death. It's appalling that there hasn't been further investigation into her death - an obvious murder. She was an elegant lady and a brilliant, gutsy and fearless reporter and deserves better. RIP Dorothy. I hope Mr. Shaw's efforts eventually get you the justice you deserve.

As far as Marilyn Monroe, everything Mr. Shaw says about the circumstances of her death jive with what I was told by my mother nearly 60 years ago. I grew up in the 50's-60's just 25 minutes from the house on Fifth Helena where MM was murdered. It was no " accidental overdose" or "suicide." A friend of my parents was one of Monroe's neighbors and she saw a lot of the "comings and goings" at Marilyn's. I was only 11 at the time and my mother related all of this to me many years later. This family friend told my parents that she and other neighbors on their cul de sac were playing cards the afternoon of 8/4/62 when they heard a terrible commotion going on at Marilyn's house. They heard RFK's very distinctive accent. There was no question whatsoever WHO it was. He was hysterical, screaming "Where is it! Where is it!"... and MM was screaming at RFK to get out of her house. It was no secret they had been having an affair, but it was obviously OVER that day! Everything Mr. Shaw relates in this book about that day is exactly what my mother told me her friend heard. BOTH Kennedy brothers had disclosed top secret information to Marilyn, including confirmation of UFOs and the U.S govt's failed attempts to kill Castro - and Marilyn liked to keep detailed notes of her conversations with both JFK and RFK in her diary. When RFK dumped her that weekend, MM threatened to go to the press that Monday and "tell all." Monday never came for Marilyn.

Mr. Shaw isn't afraid to "go there" and he connects all the dots -- and names. This is an amazing investigative work into how the deaths of Monroe, JFK and Kilgallen all tie with one another...and how RFK is the key central figure in how they tie together. It's fascinating reading. My only complaint is that the narrator mispronounces several names, but don't let that deter you from buying this book. It is one of the best true crime books I have read in the last 10 years. If you buy this book, I recommend you get Shaw's two other books about Dorothy Kilgallen and read them first. ALL are excellent!

awesome all around. thought that it would be boring at first but grew to like it.

I had so enjoyed listening to Mr. Shaw's earlier work about Dorothy Kilgallen, that I looked forward to listening to this book tying the deaths together. However, when he started with the same hate speech that has so terribly divided this country, I realized that this book's author has an agenda of which I want no part!!! SMH That being said, the narrator is excellent!!!

The story was very interesting. I did keep thinking I was listening to chapters over and over. There was a lot of repetitive info. Also I am not sure what Trump had to do with this but I guess bashing him makes it so you sell more books...

Really liked how all the information was laid out and presented to make total sense. After reading dozens of books on these subjects I got clarity on questions and theories I have Shuffled around for years going back to 1972. Well written And thoroughly enjoyed.