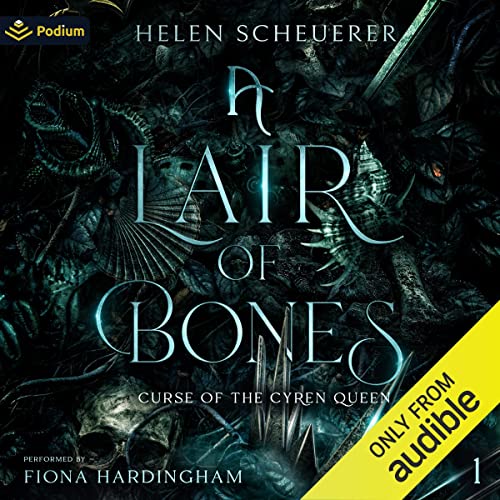 A Lair of Bones

By: Helen Scheuerer
Narrated by: Fiona Hardingham
Try for £0.00

A deadly contest. A vaulting ambition. How far will one cyren go to win?

Mighty cyrens have ruled the ancient lair of Saddoriel for centuries; a cavernous fortress and a subterranean labyrinth of tunnels and levels all powered by magic and music.

From the moment she was born, Roh, the daughter of an infamous criminal, has been despised by her own kind. Restricted to the Lower Sector and forced to work as a common bone cleaner, she has always believed she belongs above: where lies adventure...and power. Opportunity arises in the form of the Queen’s Tournament, a treacherous set of trials that could see the victor crowned ruler of the entire lair. Up against the most cunning, dangerous cyrens in all the realms, does Roh stand a chance?

A Lair of Bones is the first gripping book in the dark fantasy quartet Curse of the Cyren Queen.

Includes A Song in the Deep, a Curse of the Cyren Queen novella.

What listeners say about A Lair of Bones

I enjoyed the brilliant world building in this dark fantasy, from the subterranean landscapes to the histories. Interesting side characters add to the scope of the story. The narration was clear and animated but not distracting. You can't help but want to see our heroine, Roh succeed in the tournament in which she participates. It would have been nice to get out of her head a bit more but that could also come down to my preference for a little distance between myself and the pov character.

Couldn’t stop listening to see what happens next, there were some parts that dragged a little but that’s reAlly my only complaint, so far any age can probably read the book as it’s pretty clean, I normally prefer darker books but I’m really intrigued by where the overarching plot is heading and it does have unique points

I wasn’t sure about this series, but I really love it! I have an extensive library. This is a good series to add to my collection. Hope the new one comes out soon.

Absolutely loved this story! Can't wait to hear more about the sirens and their world under the sea.