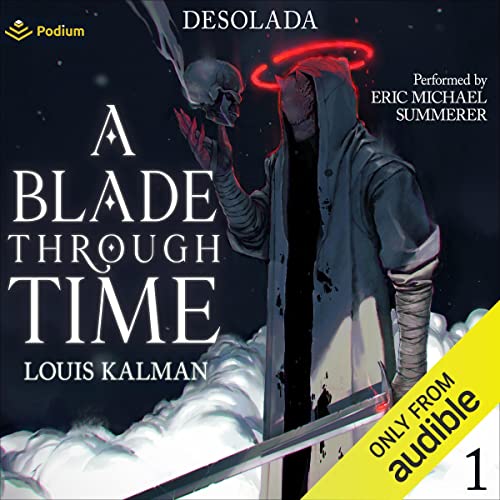 A Blade Through Time

By: Louis Kalman
Narrated by: Eric Michael Summerer
Try for £0.00

A young man with magical gifts is caught in an immortal battle between demons and demigods in the first book of this grimdark fantasy series.

Leones Ansteri was only sixteen when they came to kill him for the heresies his father had committed against the Archons—the mighty demigods who keep the peace in the Civilized Lands and prevent the evil Goetia from enslaving all of humanity. But even as the flames of the Magisters burned everything Leones knew to the ground, they awakened in him a power he didn’t know he possessed: the ability to manipulate time.

Alone and on the run, Leones finds refuge in the city of Odena, seeking out the opportunity to apprentice with the philosophers and build his skills in magic, mental manipulation, and swordsmanship. But as Leones grows more confident in his temporal abilities, he realizes all is not well in Odena.

Demons, long thought to be banished, have been spotted in the city, and Leones soon discovers he can’t trust his friends, his teachers, even his own memories. For unbeknownst to him, he’s become embroiled in a desperate battle for domination that will alter not only his own fate but the destiny of the entire world . . .

Effortlessly blending elements of horror, grimdark, and progression fantasy, A Blade Through Time launches an irresistible series from a captivating new voice in the genre.

The first volume of the hit progression-fantasy series—with almost 500,000 views on Royal Road—now available on Kindle, Kindle Unlimited, and Audible!

What listeners say about A Blade Through Time

Starts off strong, really loses its way and just about jumps off the rails near the end.

struggled to even get halfway, didn't finish it
5 hours in and nothing happens, and all he does is whine about people avoiding him. would get a refund if I could

Awesome writing style and concepts! I also really enjoyed the plot twist at the end!

The first couple of chapters are absolutely fantastic.

Then there's a couple weeks time skip and becomes a monolog. None of the characters have depth and the 16 year old main character goes from an adolescent sleeping through a lecture to sounding like and old man.

There isn't any character growth. The hook of the start of amazing magic and otherworldly beings ruling the world is left to instead talk endlessly about half baked philosophy classes in order to make it seem like the main character is becoming a sage.

Not to forget the other kids being taught act like middle schoolers even though they're as old or older than the MC.

I may try to slog through it in the future if I run out of new stuff to listen to and see if it gets better but as of now I couldn't cringe through it.

Great read/listen! Definitely worth the credit, looking forward to book 2 and seeing what happens next.

Overall? It was great!!

Lets start off with the MC. He has an incredible power and uses it to its fullest potential. He isn't too OP and has to make difficult decisions which aren't always correct which gives him a more relatable feel. The story was also pleasing but could get a bit confusing with how long he's really spent in certain places due to his time magic. My only Con to this book would be the end, It was great but the word play whilst describing it made it a bit confusing other than that the ending was great! (and a little whacky but i found it to be a pleasant surprise)

the first half of the story was great. but about half way through things start flying in from left field with no time or reason. then it gets very strange and convoluted in the extreme. I will def not be getting the next book. the narrator was on point though. his voices and tempo was protect.

The beginning of this book was ingrossing and original. Then plot hole after hole after hole...... Characters come and go and nothing is developed. Even more, what disturbs me is the gross levels of moral ambiguity. It's almost like the author is trying to encourage the ideals of drug use and selling your soul to the devil, it's so wierd......its not good and it honeslty makes me cringe.

This was fantastic. I'm eagerly awaiting the next book. I love that you can tell he was influenced by Gene Wolf

I was unfamiliar with this series and author when I found this book, however, this book is great. It has interesting characters, great world-building and really cool magics. This book really nails grimdark, it felt perfect for the story. I greatly enjoyed this book and I can't wait for more in the series.