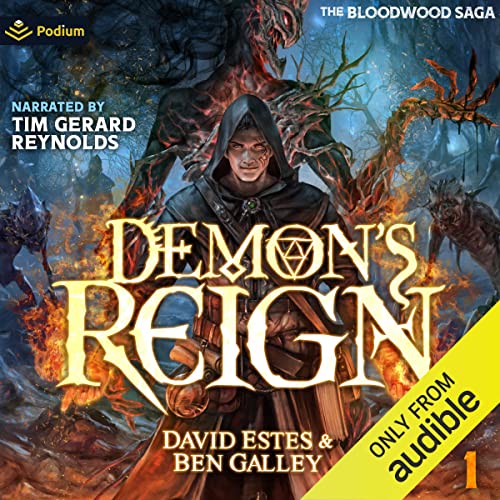 Tarkosi Terelta is a nobody. A nobody who will save his world from demons and the hellfire they bring.

The third-born of a shamed family, Tarkosi's lot in life is to spend his days as a worker, feeding temperamental lancewings under a harsh master. His days in the bloodwood city of Shal Gara are full of drudgery, tedium, and pain, his own ambitions cast aside in the name of order.

That is until demons from a broken world invade the forest realm of The Swathe, and an accident born of violence and dark magic intertwines Tarkosi’s fate with the greatest among them.

Forced onto the front lines of a war forgotten by history, Tarkosi must balance battling the royal demon bound to him with the rapid progression of the magical abilities its presence has bestowed. Risking everything, he will need to tread a thin line between hero and heretic to keep Shal Gara from falling into ruin and chaos.

Avatar: The Last Airbender meets Venom in this epic progression fantasy perfect for fans of Iron Prince, Cradle, and Kingfall.

What listeners say about Demon's Reign

Not what I expected from the author

First of all Demon's Reign is great and I can't wait for sequel.

Secondly to explain the title: This author is known for writing very grimdark stories where everyone is miserable so I kinda expected demons to just destroy everything and enslave and use everyone however they see fit basically right after the intro was over.

Yeah that's not what this book is about, not at all.

Instead what we've got here is a really weird case of David Estes writing an actually hopeful story where the main characters family isn't even tortured and murdered right in front of his eyes.

We've also got my favourite trope going on here: forbidden power. As you can read from the book description the main character ends with a demon lurking in his soul and as a result his magical abilities grow at an extremely rapid pace and it's executed very well.

Also this connection doesn't give him a telepathic link to the demon, he still needs to talk to it out loud, which makes him appear a bit crazy at times. It's not all bonuses either, like it's still a DEMON inside his head and it's whispering does seem like it will affect him on the long run.

He doesn't just automatically become the best wizard ever, even if he does sort of pull magic out of his ass at first. He actually struggles with spell weaving even during the big battle and at no point in this book does it feel like he's super overpowered chosen one.

Saw the authors promoting this in reddit, so decided to take a chance on this new series. Utterly fantastic story with some great world building and charactors. Be warned its really long but its time really well spent.

Special thanks to the narrator, he knocked this out of the park, i really hope there will be another in the series it really deserves to shine in a sea of books now days.

Waiting for the next instalment in the series.

At times the pace was a little slower than I would have preferred David did a great job building out this new world, or the tiny piece of the world that this story was anchored around. A couple of teasers for future betrayal and, I suspect, heart breaks. I do hope both magic systems are more thoroughly explored in the next book, as well as more of the wider world.

A little slow at the beginning, but quickly picks up to a great story with amazing characters and plot twists.

A fantastically new world created by two excellent authors, David Estes and Ben Galley have come together to bring us a new world of chaos for us fantasy lovers to get lost in. I absolutely love a good collaboration, the story flows so amazingly you can't tell who wrote what. Demon's Reign is the first book in new and exciting series The Bloodwood Saga. The worldbuilding, plot and characters are brilliant, it's so fast paced, action packed with battles and the magic elements is excellent. In this first book our main protagonist Tarkosi Terelta is a lowly third-born of a shamed family, Tarkosi's lot in life is to spend his days as a worker, tending to temperamental giant birds called lancewings under a harsh master. Clumsy and and always shuned by the highborns for his father's past, Tarkosi life is about to change and I mean possessively. Fire demons from a broken world invade the forest realm of The Swathe, an accident born of violence and dark magic intertwines Tarkosi’s fate with the greatest among them. Can Tarkosi finally become who he was always meant to be in the society of the bloodwood city of Shal Gara and help those he loves dearly to stop Shal Gara from falling into ruin and chaos from demons set on there total annihilation. Can't wait for the second book, if your looking for something new, I very highly recommend....🔥😁

Despite being advertised by the Authors as a progression fantasy novel, this most definitely is not that. Demon's Reign is a slow burn, story driven narrative that hinges heavily on worldbuilding and character. And does it succeed? Most definitely!

I will start this off by saying that if you come to this book expecting a progression fantasy then you have been mislead, while the mc does get progressively stronger and a lot of the events occur because of that. The book does not make a big show of progressing or gaining new abilities. So as a progression fantasy advertised book, this is extremely weak.

HOWEVER! As a fantasy book, Demon's reign presents you with extremely well fleshed out worldbuilding and characters. There is a humorous undertone to most things that makes it enjoyable to listen to the first person perspectice. Not to mention that character relationships are extremely strong, and you really feel it. No character was ever irritating to listen to talking, you never wished that they would move on to the next one, and you never outright thought that this is a badly written character, moreso its the opposite! As it did catch me offguard more than twice with its subtle twists. Overall the characters in this book are extremely enjoyable and funny to follow. ESPECIALLY the relationship between the main character and his intertwined demon.

Now onto story. The story is good aswell, while it is definitely very slow at the start, the book takes that time to build up character and world. While I personally enjoy these moments, they can be frustrating for others, so if you go in expecting fast pace actions, you might be a bit miffed. There is however one less solid thing about the story, and that is the thing that sets it into motion. I do have to say a few things don't make sense and come way too abruptly, and while it is easy disgard it due to how good the book is overall, I do feel it necessary to address. The rest of the story however is great! It is straight forward and simple, but fun and tension filled!

My final personal score of the book is 4.8/5. Demon's Reign is a world filled with wonders and terrors alike, building on relationships and tensions extremely well. I highly recommend it to anyone who is into slow paced, character and story driven narratives with heeps of amazing worldbuilding.

it goes no where.

so very hard to get through. whining complaining no structure. the audible button mashers gave this a higher rating than it deserves.

listen to warded man instead

the warded man series. cannot find a comparable series. I just listened to a Jamaican demon fight with humming birds on a tree for 20 hrs

slow start but worth it

was slow and agonizing build up of the characters but once you get past that part the story flows along and is very interesting.

The trouble with slow burn is that it numbs the attention of the reader and/or listener. You can literally tune out for thirty minutes or so at any point and not miss much at all. British accents tend to do the same.

I got this book because of Mr. Estes and the narrator, and glad that I did , 100% suggest this book. Great job

After having listened to Kingfall this was a very interesting departure. A great story still and sticking to one plot line throughout. I'm looking forward to future installments. The narration is outstanding as it was for the kingfall series.

Another excellent story from David Estes

Though Ben Galley probably had significant input. Estes has a history of teaming up with great authors. Like James Patterson. This series is quite different from Estes' Fatemarked and Kingfall. This one has a single plotline and is told in the first person. Same great prose but without so many plots and characters to remember. And the characters are lovable in their own way. Fabulous ending to this book with intriguing lead into the next book. I hope Estes wraps up Kingfall and puts his effort into this series. The audio performance is one of TJR's best. He has the material to demonstrate just how good he really is.

struggled to finish and the main characters name changing from Tarkosi to Maven randomly really pulls you out of the story.

Yup it's a slow burn but it's awesome!

Beautiful story brought a few tears out. David you rock. Love all your books. And of course Tim is the man as always.