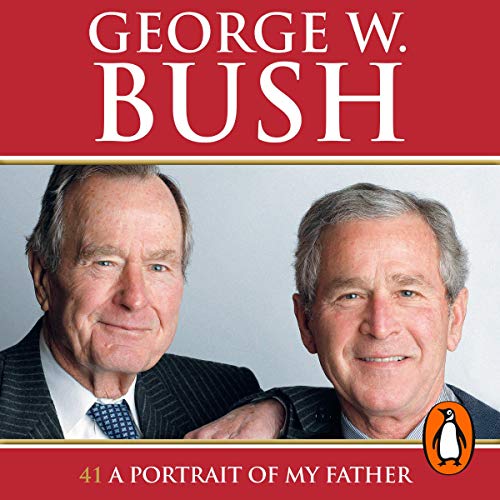 41: A Portrait of My Father

Forty-three men have served as President of the United States. Countless books have been written about them. But never before has a President told the story of his father, another President, through his own eyes and in his own words.

A unique and intimate biography, the book covers the entire scope of the elder President Bush’s life and career, including his service in the Pacific during World War II, his pioneering work in the Texas oil business, and his political rise as a Congressman, U.S. Representative to China and the United Nations, CIA Director, Vice President, and President.

The book shines new light on both the accomplished statesman and the warm, decent man known best by his family. In addition, George W. Bush discusses his father’s influence on him throughout his own life, from his childhood in West Texas to his early campaign trips with his father, and from his decision to go into politics to his own two-term Presidency.

What listeners say about 41: A Portrait of My Father

I lovely story of a sons love of his father, dubya is obviously extremely proud of his dad, and it's a cracking insight into recent history

I belong to a generation that knows George W. But not his father. It was a very interesting thing to hear the sons account of his father.

Lots of personal stories and insight that tells so much about George H. W.

I came away still in disagreement over just about every choice these two men made through their whole lives! But the Two-term Bush speaks well and offers a clear presentation of his written word.

Delighted that he examined in more detail his father's early life before the presidency. And was particularly struck with the detailed accounts of his acting Presidency after the shooting of Reagan.

I got this using the monthly credit and probably wouldn't spend more than £10 on it however.

Fascinating to listen to, couldn't leave it alone. Made better by the fact it was real by President George W Bush. Excellent

It is simple and enjoyable. I enjoyed Bush junior's awkward moments throughout the book. I never had a positive opinion on Bush Jr. and his Presidency, but this book changed my view on Bush.

A terrific audiobook about a great American hero

George W Bush's audiobook about his father is easy to listen to and full of feeling. If you appreciate the leadership of George H W Bush this is worth listening to.