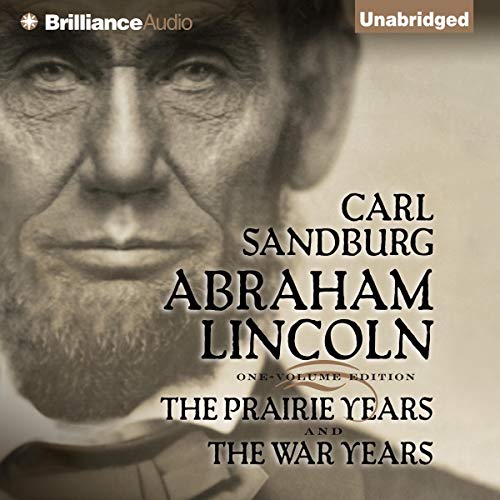 By: Carl Sandburg
Narrated by: Arthur Morey
Try for £0.00

Originally published in six volumes, which sold more than one million copies, Carl Sandburg’s Abraham Lincoln was praised as the most noteworthy historical biography of Sandburg’s generation. He later distilled this monumental work into one volume that critics and readers alike consider his greatest work of nonfiction, as well as the most distinguished, authoritative biography of Lincoln ever published.

Growing up in an Illinois prairie town, Sandburg listened to stories of old-timers who had known Lincoln. By the time this single-volume edition was competed, he had spent a lifetime studying, researching, and writing about our 16th president. His extraordinary portrait brings fully to life the country lawyer who would become one of the most influential and beloved presidents of the American republic. Additional information about the author can be found at: http://www.nps.gov/carl.

"A Lincoln whom no other man than Carl Sandburg could have given us." (Mark Van Doren, New York Herald Tribune Book Review)

What listeners say about Abraham Lincoln

I really enjoyed this book. The first portion, before becoming president, gave an in depth view of Lincoln's humble origins. How he was shaped by the communities he belonged to and the landscape around him. Then, during the war, the immense burden he bore was palpable. The account of his last day was very detailed and moving.
As always, very ably performed by Mr Morey. Highly recommended.

This book takes a long time to get through and is worth every moment. I found myself drawn more and more to this amazing man and his remarkable life. The story holds your attention from the first word to the last. I was so involved that I found myself delaying listening to the details of the assassination as I knew it would upset me, and it did. I cannot recommendations this book highly enough.

A moving tale of a very human man

I have read several Lincoln biographies, including Doris Kearns Goodwin's very good one, but this one gave me much more of a sense of Lincoln, the man. There were many of his jokes, many instances of his interactions with ordinary people, so many stories of his kindness and understanding of human nature.

I didn't realize when i bought the book that it was 44 hours long. To my great surprise, I finished it in about ten days, listening four or five hours a day because I was so interested.

There were a few stories about Mary Todd Lincoln's difficult behavior that revealed her illness and his constant generosity and understanding.

I also liked Sandberg's references to how Lincoln's speech sounded. I am almost certain that he would never be elected today, as he would be dismissed as an ignorant hick.

From previous biographies, I knew that Lincoln was shot on April 14. When Grant defeated Lee at Appomattox on April 9, I realized the end was near. I kept hoping (knowing it was ridiculous) that Lincoln would decide to stay in that Friday. The stories of some of the things he did that day were heartbreaking, and so very kind. For example, he met a widow with four children whose husband's pension hadn't been paid for months. He promised to personally take care of it the next day. She wept in gratitude, and I wonder if she ever got that pension.

The national train ride of mourning was so well written that I felt the nation's love and sorrow. One shortcoming, I felt, was that other than the moments and hours after the shooting, Sandburg provided no quotes or insight into the reactions of Lincoln's wife and sons. I wondered what it was like for them to accompany his (eventually decomposing) body around the nation. In the midst of their grief and horror, I wonder if the solidarity of the crowds was comforting, exhausting or both.

Often during the book, as Lincoln's decisions were reviewed, frequently very unfavorably, by his contemporaries, I wondered how long it takes to get a fair perspective on history.

This was a beautifully written and narrated book, and it will inform my view of Lincoln and American history forever.

Yes, we all know how the story ends.

But this significant book (44+hours) was well worth the listen. Carl Sandburg tells the story of Abraham Lincoln in a way that had me feeling like I knew the man. I learned the good, bad and completely unexpected about Mr. Lincoln, his beliefs, his relationships, his humour and the amazing times in which he lived.

Arthur Morey was a wonderful narrator, balancing his delivery and dialects in a measured, respectful and, I thought, unbiased way.

The ending was sad because it felt like I had lost a friend.

What made the experience of listening to Abraham Lincoln the most enjoyable?

Realizing the gravity of whom the biography was written and who wrote it; both giants in their place in our history.

That it revealed the common themes of our politics then and now. It also emphasized how close the Union came to dissolution.

Arthur Morey was steadfast - it was a long book - that he brought remarkable sound to the written words of Sanberg.

I have a long commute and confess that I drove with wet eyes more than a few times.

Written by Carl Sandburg, narrated by Arthur Morey, a very long audiobook - over 44 hours of listening. Although originally released way back in 1954, this audiobook format was released in 2013.

Two American legends. One, Carl Sandburg - poet, author. The other, Abraham Lincoln. This alone should tell you this book is a pretty decent listen. Predominantly a history of the United States from the late 1700s through the end of the American Civil War, Abraham Lincoln is also recommended for anyone interested in an understanding of Lincoln, the man.

Abraham Lincoln is a compilation of Sandburg’s decades of research. The book is filled with Lincolnesque homily, often disconnected, one line insights as an attempt to convey Lincoln, his time, character, friends, enemies, and Lincoln’s humble roots. Typical of the writings of the time, the prose is wordy and some would say verbose. Starting with details about Lincoln’s heritage, his grandfather also being an Abraham Lincoln, his father Tom, the brief life of his mother Nancy Hanks, the book traverses Lincoln’s life, election, presidency, the American Civil War, through his ultimate assassination in April of 1865.

Narration by Arthur Morey is superb. It’s apparent that Morey admired Sandburg’s writing and Abe himself.

If you are interested in the preeminent insight into Lincoln, an in-depth look at his foibles and amazing intellect, this read is a must. It is also an excellent American history lesson. Enjoy!

This is by far and away the best biography I have ever read. It is not in the least smarmy-the principal failing of most biographies I've read. It presents a wealth of fact, largely leaving it to the reader to draw their own conclusions. The facts often cast Lincoln in a bad light, but this only contributes weight and substance to the portrait of a very great man. And that is the book's principal merit, it reveals in its fullness, with poetry and pathos, the astonishing genius of Abraham Lincoln.

This was a much appreciated listen and very moving. It's too bad that more politicians don't try to emulate President Lincoln. But I think there have been very few such extraordinary people who have risen to our highest political office. This book has had a dramatic impact on me. I most highly recommend it. It was very well read.

It is the only audio book of Carl Sandburg's six volume Pulitzer prize winner which I have read three times so I was compelled to buy it. The book is not on trial in my review, it is Arthur Morey. Is Mr. Morey an American? There were so many affected pronunciations that I suspected Morey learned the American dialect as a second language. How can anyone pronounce the name Rosecrans with three syllables? He says "Roze-ah-kranz" instead of "Roze-kranz" like he started to pronounce the name and had to stop in the middle of it, insert an "ah" before he remembered the last syllable. There are many more examples.
Secondly, I suspect this book is abridged, not unabridged as advertised. I could not find the vignette about the blind soldier that Lincoln met in his carriage in Washington.

There is only one character in a six volume biography of Abraham Lincoln.

Did Arthur Morey do a good job differentiating all the characters? How?

He did a good job, professional but not top tier. His pronunciations (Englander?) are distracting but do not ruin the performance.

What else would you have wanted to know about Carl Sandburg’s life?

Nothing. I do not care about his wife's goats, his kiddie books, crappy guitar playing,lousy singing, and mediocre poetry; what did do was write a magnificent biography of Abraham Llincoln. He could of died after "The War Years" was published in 1939 as far as I am concerned. Well, he did write the poem "Chicago" but that was before the Lincoln biography.

I wish I could prove this book is abridged, but my copy of "The Prairie Years" and " The War Years" was ruined by flood.

I'll hardly be able to describe the immense work here but I loved this from start to finish. Thank you.

Listen to the Book, period!

What was one of the most memorable moments of Abraham Lincoln?

This is The definitive history of Abraham Lincoln written as writers used to write and by a master. No matter how familiar you are with the life and times of Lincoln, listen to/read this book.

I am curious about his sources but assume most are cited somewhere. After 40-something hours of Lincoln I feel I have a much better grasp of the time and Lincoln himself. Also can't help but to draw comparisons to our current political climate and think maybe things aren't so different (aside from an actual war).