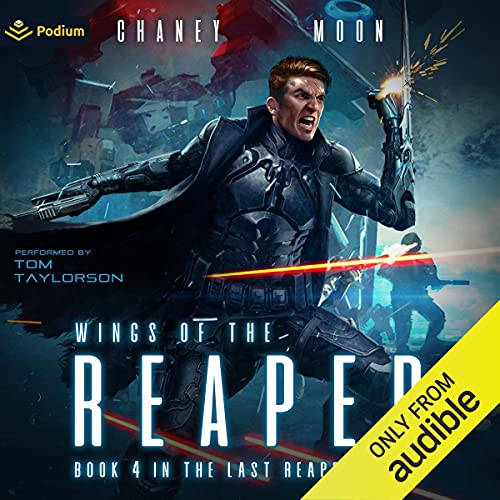 Wings of the Reaper

By: JN Chaney,Scott Moon
Narrated by: Tom Taylorson
Try for £0.00

Vice Admiral Nebs and his Archangels are coming for the Last Reaper, and they’re out for blood.

Halek Cain and his crew jump into one slip tunnel after another to escape a psychopath with an armada of deadly warships. Every system is a trap; every encounter a potential battle.

When Cain and his friends receive a distress call from the Bold Freedom, innocent lives will hang on their every decision. And Cain still has debts that need to be paid. People who helped him off the exploding prison station are going to die horribly if he doesn’t pull of the impossible.

But they don’t call him the Last Reaper for nothing.

What listeners say about Wings of the Reaper

The change in performer is jarring. From humourous veteran to young surfer/valley girl. (No offence)

I was so disappointed to find they had changed the narrator in this latest installation of Reaper Kane . it feels like I went from listening to a MAN and now I'm listening to a BOY ( no insult intended ) . This book lacked the edge I experienced in the first three installations and I'm struggling like crazy to finish it . I hate it ! its lacking in the excitement, the edge and the threat I expected from the last reaper . Very lackluster and so I struggle to reconnect with the characters like I had before .

This was A STRUGGLE to listen to. Though the story is great but sorry not sorry I like Ray Porter so much better, he brought the characters to life, he is Halek Cain, it just feels like they recast the role of the main character of a TV series and act like we didn't notice and are just supposed to accept. please please bring back Original Reaper Cain(Ray Porter)

Just not the same without Ray Porter

The quality of a book that I read on paper is purely dependent on the quality of the writing. But when it is an audio book, the performance is as important as the story. Ray Porter brought characters to life with voices, accents, and tones. It made listening to each book in the series consistent and mentally relaxing while driving or doing repetitive work. I was disappointed that the narration changed in the 4th book and I lost the cadence of the series as I had to learn who the characters were again. The story itself is perfect for what I use audible for... to distract me from the frustrations of the daily 45 minute commute. The content is not complex and the characters are easy to understand. It doesn't require a great deal of thought to follow the plot line but it does require enough that I don't tune out.

New narrator and a new feel

I posted a review after a few chapters of this and after completing this audiobook am updating my review. I must admit I miss the old narrator and my advice is to not listen to this too quickly after the previous book in the series it may really throw you off at first. The new narrator grew on me. I was abit confused at first because characters that sounded older now sounded younger and lost their accent. But if you come into this book with an open mind and liked the previous books you'll enjoy this one. I am still curious at what caused the change in narrator but probably won't get that question answered.

WHY DID YOU CHANGE THE NARRATOR!!??!?
Maybe I would like the new one if you started the book series with him but I can't. I just can't. I didn't even make it through the first chapter. perhaps I'll buy the book in paperback so I can finish the series but honestly, this ruined it for me.

he said over and over

messed up a great book ,where ray porter, didnt you even listen to it before releasing it, it really sucks

Why switch from Ray did he die? I guess I'm done with this series. No thanks.

I can't even listen to it.

x said / I said / x said 20 times in the first few minutes. I want my money back. you ruined a great series.

Garbage after the first 3 books!!!

First 3 were great this one is awful dont change the narrator on the 4th book done with this series.

once again a great book I can't wait to hear what's next in the life of reaper Cain .This is one of the best syfi books I've had the pleaser of hearing

One Ship, Two Ships, and one MASSIVE ship

Wings of the Reaper when I read it was my favorite because of the first contact with more humans beyond Union and Sarkonian Space. The new Narrator read Galactic Law so I keep hearing Deputy Walker since Ray Porter was Halek Cain, might take time to get use to the change but did a great job overall!