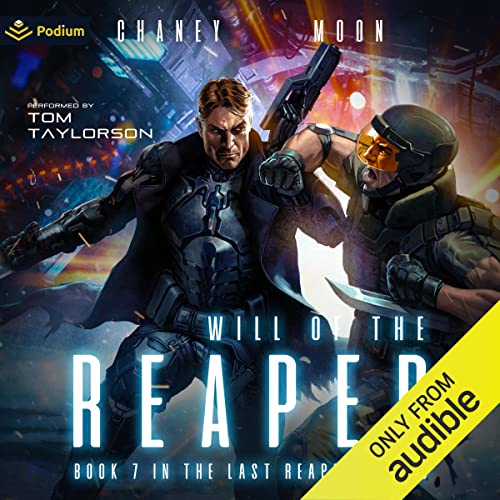 Will of the Reaper

They say you only get one chance to make a good first impression, especially when it comes to making first contact with an advanced race of aliens.

When Dr. Ayers uses the DNA of a long-dead alien life-form known as the Sansein, the Last Reaper finds himself caught up in an unprecedented situation. The Sansein, as it turns out, were not as extinct as Ayers originally believed.

Possibly benevolent, definitely dangerous - these aliens are bound to react poorly to what has been done with their fallen kin. The life of a Reaper is never simple. The exodus fleet has old enemies that can’t be avoided for much longer. But those same enemies have a secret as well...and it just might save them all.

What listeners say about Will of the Reaper

Another good installment of Reaper fun, but...

I've enjoyed each book of the Reaper series (including this one), but a full credit for a 6 hour book?

This will make me hesitate when there are so many other good books available that represent a better value for my credits.

the story is good and the performance is excellent. though for the price the books should come in two packs. there is a lot of repetitive filler so after 6 hours just enough happens that you want to hear more. I will probably not be continuing with this series...

Good story but two books should be one credit. Would advise not to start series.

Loved this one and it was enlightening! I accidentally skidded this one somehow. Now I’ll go to 11🤣
As always great job and you too Tom!

I have grown to love the characters in this space opera and always look forward to the next installment.

I'm fan of The Reaper Series and this another winner..just like the rest.
Same engaging main crew plus new friends and enemies. On to the next one.....

These books are a solid go to for me. They have some issues, but what series doesn't?