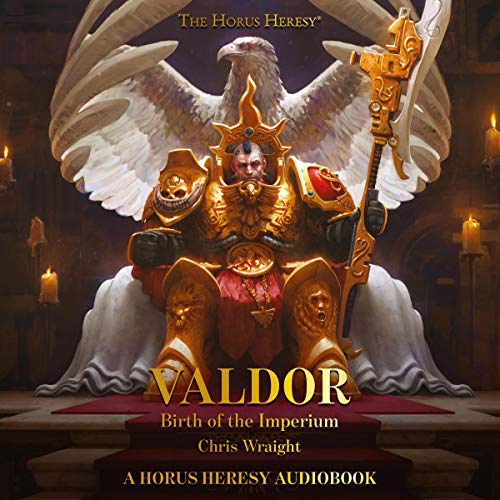 Valdor: Birth of the Imperium

Constantin Valdor is the chief of the Emperor's Custodian Guard and is among the closest of His companions. As the wars of Unity come to their end, Constantin faces his greatest challenge, as dark deeds are required to pave Mankind's road to the stars.

Listen to It Because:

Delve into the era of the Unification Wars and discover Constantin Valdor's role in bringing about the Imperium of Mankind in an unmissable novel by Chris Wraight!

Constantin Valdor. It is a name that brings forth images of heroism, honour and peerless duty. For it is he who commands the will of the Legio Custodes that most esteemed and dedicated cadre of elite warriors. He is the Emperor’s sword, His shield, His banner and he knows no equal. Clad in shining auramite, his fist clenched around the haft of his Guardian Spear, he is the bulwark against all enemies of the throne, within or without. Nearing the end of the wars of Unity, Valdor’s courage and purpose is put to the test as never before. The petty warlords and tyrants of Old Earth have been all but vanquished, and the Emperor’s armies are triumphant. What now for the nascent Imperium and what fate for its forgotten soldiers, its Thunder Warriors and armies of Unity? A new force is rising, one which shall eclipse all others and open the way to the stars. But change on Terra is seldom bloodless, and for progress to be ensured darker deeds are necessary.

What listeners say about Valdor: Birth of the Imperium

Too short, too good.

Every 40k fanboy wanted a little love shown to the emperor's most loyal companion, his infallible protector and one of his few true confidants. Frankly he deserves a full book series to himself. Alas he had not been shown the love he is entitled to imo.

Now down to the actual book itself. Do not think this book will be filled with epic lore filled conversations between the big 3. Both the sigilite and the emperor make some tantalising yet all too brief appearances, their conversations with our man are very interesting but this book is about Valdor and his legion. My guess is that the author didn't want anything to over shadow our main protagonist, so this is very much a story of Valdor and an insight into his and the early custodians own role in the creation of the empire, and to that the book does it very well indeed.

But By the emperor it's not enough! Even though the story is well rounded and the combat is epic and satisfying, I still want a deeper insight into one of the most enigmatic of characters in our 40k universe. Let's hope he and the other 2 get more love in the near future.

As usual the voice acting is fantastic, I expected nothing less from the black library, not much else needs saying, anyone thinking of giving this book a listen will already be well versed in the whole black library team and their frankly, unmatched quality and consistency.

Get this book but temper your expectations.

One of the best short 30k novels released so far

This was sort of similar in style to the Primarchs series, which is fitting as Valdor is sort of an primarch of the Custodes. Also similarly to many books in the Primarchs series, it didn't really focus on the titular hero of the book, Valdor, but contrary to many of the Primarchs series books which do that, it didn't bother me at all in this book. That's because of the setting of the book and of what is told and revealed in it, it's set right at the point between the Thunderwarriors and the upcoming Astartes, when Terra has just mostly been unified under the Emperor's might. It sheds light on what happened to the Thuderwarrios and why, why and how the Astartes were made and also on the motivations of the Emperor, the Sigilite and Valdor (well, he follows the Emperor in eeverything). It casts some more shades of grey in to the character of Emperor and it's overall very well written. I would highly recommend this to anyone interested in 30K, one of the must read books to understand the setting.

Just as a side note, after listening to this audiobook, I'm currently listening to the Alpharius Primach's book and just as a note, that book is set around the same time as this one, but from a different angle, so you might want to listen to that one next. I haven't finished it yet, but it has been a very good book so far as well, similarly revealing aspects of the lore that haven't been revealed before.

If you're a lore junkie like me, then this audio is one delectable morsel. It's no full-length Horus Heresy novel, but it gives a fascinating insight into a period of the 40K timeline fans rarely get to see. The voice-acting us superb, the SFX are atmospheric without being distracting, and the story is short enough to go through in one day, but is far, FAR from simple or boring.

Will make more sense to those already familiar

I wanted to listen to something that would take me into a different world to take my mind off current world events for a while. I thought that a fantasy novel would do the trick and chose this on the back of reviews of other works by Chris Wraight who is highly regarded in the genre. Whilst I appreciated the mythical world of Valdor and the Birth of the Imperium I could not help think that this would have made more sense to someone who is already familiar with other works in the series as, reading other reviews, it is clear that this is actually a prequel other works and there are various references in this book that explain other story lines. I expect that much of this was wasted on me having not read or listened to any of the other stories and I was left thinking that, although this is an impressive work and is well told, it is a bit like trying to watch a soap opera for the first time and not knowing the backstory to the characters involved.

This is extremely well written. Add Pacey as narrator, and something magical happens. He is perfect for the 40k universe. There's something about him. He brings something that matches the 40k tone. Sardonic, witty, intelligent. I'm not sure. But it's perfect, really. I pray to the Emperor that they keep him on.

Absolutely loved every second of this book, as soon as it was finished I looked to see if there had been any related stories yet that follow on from it. I wont spoil it for anyone but it offers a glimps into some of the more obscure characters in the imperiums history. I cannot wait for any follow up novels. The story telling was great and the actual story itself was amazing and really sucked you into itself.

100% agree with the indepth review thats up on audible, only wanted to add the welcome new addition of Steven Pacey (THE BLOODY NINE) to Black Library already great narrators. More of both please

While well enough performed, the story pisses on old lore, and indeed conflicts with the lore established over decades.
Quite possibly the worst 40k novel I've encountered.

should have been called Astarte: the shoehorn character.

bland boring story that rarely features valdor, narration had poor pronunciation in some parts and cringe inducing attempts at welsh and Rhodesian accents.

Brilliantly performed, and with a rich engaging story that fleshes out much of the unknown era of the lore

Can Chris Wraight please have a team of lore nerds

I get very conflicted with Chris Wraights books because they are well written by themselves but the are not consistent with the greater 30k/40k lore. In this book we get a lot of good lore but then suddenly we’re told that the legions had their icons before finding their primarchs? Also apparently the emperor thought of the primarchs as sons? Those two things not only are out of character but they have books that address those issues. I get wanting to hint at the dark angels helping with the conflict but anyone who knows 30k will know that a Roman numeral 1 on the pauldron would be more of a name drop than the legion heraldry. Overall kinda annoyed/ disappointed because it was good up until the last 2-3 chapters where all this happened.

I really liked this novella, but given that I wanted to learn more about Valdor, I was disappointed. As a story about an event in the early part of the Imperium, it is very good, but Valdor features in less than half the book. The reader's performance was fantastic as always.

Honestly was hoping for more about Valdor and have the book actually be about him instead of the slew of other characters who got far more attention I feel. I honestly feel the title is somewhat misleading to those wanting to know more about the man, rather than whats given in this one.

No revelations, just an awesome story

While most of us already know the beginning of the Imperium proper: end of the Thunder Warriors, the Primarch project, the Legions it's nice to have a character perspective about these events in finer detail, especially through Constantine Valdor.

Well done. I was hoping for more lore.

I was hoping for more Lore about the old battles, a discription of the battle between the thunder warrior and the custodes. I didn't learn anything I didn't already know. I wish more artistic licence was used towards the character development. The only real character with a story were ultimately inconsequential.

Performance was fantastic but could not save this bad book. Incredibly boring, book worst of the Imperium or Horus books I've read. it feels like it was a book they wrote just to write a book.

wooow! Amazed and I want more!

Excellent narration and performance. As is the norm for black library works. The story was great. Very enlightening. I would advise not to introduce some to the grim dark with this however. A great book though for fans and players of 40k 30k and any one who loves the lore especially.

The Emperor Protects, great story about the founding years of the Imperium after the Unity Wars.

I loved it because one of the most hated characters in all of 40K is finally cast down from her Summit and portrayed as the villain she rightly is.

By far one of the most enjoyable and re-listenable WH books. Fantastic narration as usual from Keenle, this time with a cast of supporting voices. Just enough glimpses into the lore of the Thunder Warriors to leave you wanting more.