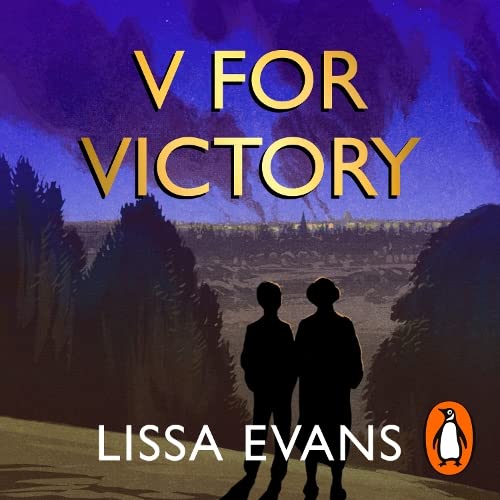 By: Lissa Evans
Narrated by: Lucy Briers
Try for £0.00

It’s late 1944. Hitler’s rockets are slamming down on London with vicious regularity, and it’s the coldest winter in living memory. Allied victory is on its way, but it’s bloody well dragging its feet.

In a large house next to Hampstead Heath, Vee Sedge is just about scraping by, with a herd of lodgers to feed and her young charge Noel (almost 15) to clothe and educate. When she witnesses a road accident and finds herself in court, the repercussions are both unexpectedly marvellous and potentially disastrous – disastrous because Vee is not actually the person she’s pretending to be, and neither is Noel.

The end of the war won’t just mean peace, but discovery....

With caustic wit and artful storytelling, Lissa Evans elegantly summons a time when the world could finally hope to emerge from the chaos of war. As sharply comic as Old Baggage and emotionally poignant as Crooked Heart, V For Victory once again shows Lissa Evans to be one of our most brilliant and subtle writers.

What listeners say about V for Victory

loved this book which can certainly stand alone, but read the series, it's charming and beautifully written.

Loved this book, the time flew by listening to it and it was over too soon. Really loved Winnie’s character and would have liked more about her. I went back and listened to Old Baggage which is another gem, it’s not really necessary to read them in order and doesn’t really feel like a conventional series but the ending does explain Noel’s situation a little bit. Great book, hope there is more.

I inhaled this in almost one go. it's an absolute joy. funny, touching, moving, gripping

Utter treat. Such a funny, poignant story, the last in this magnificent trilogy. Why aren't these books better known? Lissa Evans' name should be shouted from the rooftops. Fascinating historical detail (with nuanced correctives to the bland " our finest hour" interpretation of World War 2) , well drawn complex characters, and a plot that grips tight. Excellent narration, really couldn't have been read better.

Fabulous book. So evocative, funny, moving and beautifully written. Also superb narration. I can't wait for this author's next book.

Sorry that I have finished - boo hoo

The last book in a trilogy.Be sure you buy all 3 - Sorry I have finished them - but will revisit them again sometime - I loved the characters.

Loved it - but so sad to see there is a prequel. I’d have so much enjoyed to hear them in the right order. Great narrator too. Definitely recommend.

I read the first two of the trilogy, this is the first I have heard on audible. Quirky, interesting, and very well narrated.

I loved previous books in the series and this one did not disappoint either. great characters that are easy to like and get immersed with their story. Must admit wasn't too keen on the narrator to start with but got used to it at the end. nice bit of escapism with a happy ending to boot.