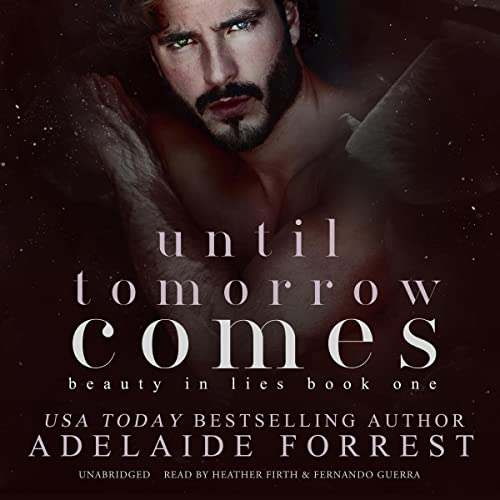 By: Adelaide Forrest
Narrated by: Heather Firth,Fernando Guerra
Try for £0.00

I came for war. I left with an obsession.

With one look, Isa captivated me. She consumed me, drawing me into her world without ever knowing the dangers of mine. I intend to make her mine, no matter what lies I need to tell to manipulate her into falling in love with El Diablo. It should be simple enough, but secrets lurk in the depths of her multicolored eyes, and I’ll do anything to understand what broke her before I had the chance. Because she’s mine to break.

Rafael Ibarra tore through my life like a raging inferno.

Consuming every part of me he touches, he promises to show me passion and the real Ibiza. Though our tryst can never be anything but temporary, I never want to leave the man who makes me wish things were different. But there’s a nightmare hiding within his multicolored gaze, a phantom rattling at the cages who wants to devour me, to take me and claim me as his. He’s temptation, pushing me toward sin with his wicked touch. But the sins of the flesh are different from the sins of the mind, and as much as I hate his secrets…I will never tell him my own.

Until Tomorrow Comes is the first book in the Beauty in Lies series and ends on a cliffhanger. This is a dark mafia romance and contains graphic violence, mature content, and elements that may be triggering. Please listen at your own discretion.

What listeners say about Until Tomorrow Comes

This cloud have been so good, but the smex scenes were pretty flat with no emotion 😐

Pheweee, I just finished the 37+ hour marathon of this wickedly delicious (and sometimes dark) rollercoaster romance.. and yes, I really enjoyed their very toxic twisted ride. Rafael is a cold, obsessive, possessive, dominant, deviant, dirty-talking anti-hero who definitely earns and owns his reputation as El Diablo. He’s the handsome Mafia King of Ibiza.. a ruthless regal dark ruler of all he desires. And, since their eyes briefly met and held where both their worlds stood still for seconds, minutes or hours sixteen months ago, Rafael’s only desire is to worship the sweet, sassy, naive, virginal Isa. So now celibate Rafael impatiently waits for Isa’s eighteenth birthday which gives him a chance to study his Princesa and spin a very devious and devilish web. A web Isa innocently steps right into which starts a manipulation of charming, intense, lust-filled Ibiza week of wooing, swoons, sex and secrets. However, it ends in kidnapping, unrepentant sins, turbulent waters, explosive toxic chemistry, highly charged emotions, verbal sparring, defiance, punishments, hot pleasures, toxic blowups, hunger, fire, flames, dirty talk, lust fuelled dark desires and poisonous secrets. Right from the start, it was too late to save Isa from his well-crafted web, from his soft touches, from his touching heartfelt sentiments, from his often cruel besotted worship.. until she tried to run from him. Then the real monster reared his villainous head.

Over these books Isa’s obsessive, possessive, protective, unpredictable, merciless dark lover broke her, pushed her, reshaped her, corrupted her, saved her and revealed the powerful Queen he knew she was always meant to be. But first they'd be a war of wills, desire vs distrust, angst vs affection, an all-consuming obsessive lust for each other, sexual brutal punishments including choking and a forced marriage. Enough to put you off?.. well hold on, there’s more!! A forced pregnancy, a joyous spilling of other people’s and their own blood, hot branding irons, danger, heartbreak, joy, tragedy, twisted passion, grief, torture, violence, suspense, uncontrollable jealousy, beautiful lies, brutal truths, betrayal, twisty shocking revelations, villainous twists and life-threatening danger before the Queen can finally share her fukd up Devil’s throne.. if she can love the monster as well as the man.

Worth a credit? Yes x 4.. after the “what the Hell” start, I warmed to the deviant and volatile age-gap story, I liked the growth of the villainous behaviour, I loved the strong primary and supportive secondary characters and the evil twin’s demise. And I addictively consumed the ranty, ragey explosive toxic chapters of combustible chemistry read by two great narrators. Yes, Heather and Fernando were the perfect couple to bring Isa and Rafael’s steamy rollercoaster to life. At the start of this book comes a serious warning you need to be sure you want to proceed because, over this long and addictive four book journey, the unapologetic psycho anti-hero’s actions and the couple’s twisted addiction to each other, leads them down some dark uncharted sexual paths.. and revenge leads to roads where monsters come out to play with their prey. It’s not for everyone.. but I unashamedly loved it.

I really wanted to like this, but it’s about two really stupid people. Skip it.

First book to an Awesome series!

Adelaide is freaking brilliant at writing her dark and sexy mafia men. Rafe is in a league of his own. Fernando Guerra is a new to me narrator. He was the perfect Rafe and the way his name rolls off his tongue when he says…Rafael is 🔥🔥🔥🔥

4 I Was Her Nightmare STARS

I have to admit I almost gave up on this book. Isa is young and sheltered and it shows. She is very easily manipulated and goes along with everything Rafael tells her do. I see why she is like that especially after seeing her relationship with her twin but I am hoping she gets some back bone as the story progresses. Normally that wouldn’t bother me but this is during the time he is holding back and trying to get her to fall in love with him. Rafe has been in her life since she was 16 and he waits and bides his time until she is 18. I love that he is jealous and possessive. I even like his controlling side but he handles Isa with kid gloves. That ending though… that has left me wanting more. I hope we see the monster Rafael hides.
🖤Age gap
🖤Mafia
🖤Stalker vibes
🖤Touch her and unalive vibes
🖤j/p

Narrators were great. I LOVED Fernando Guerra’s narration and I hope he narrates more books in the future.

Holy moly is this book perfect for dark romance readers! I craved every single word this book contained and more. I couldn’t get enough of how OTT/JP Rafe is of Isa. I am so on edge I cannot wait to read more!!!

For the lovers of dirty desires

‘Em and Kaz. Have to be the catalyst for something like this. This is one of those very good obsessive male mafia love stories. However Isa is not as Crunk as The Mouse but still a good story.

If you’re New to the spicy books then this will be a good start. To the more experienced one this book is quite old. The plot is very shallow and the spice is very soft this is not a mafia book this is a book that wants to be a mafia book. The male voice speaks with harsh accent that is suitable for this book but may be a bit tiring with time.

I really liked the whole story except for 1 issue. Why do the bad guys that are supposed to be ruthless always act like kitty cats? Im going into book two hopeful that we get a real dirty bad boy🤞🏼
I had started this book a long time ago and lost interest. Im glad i came back to it bc its very good