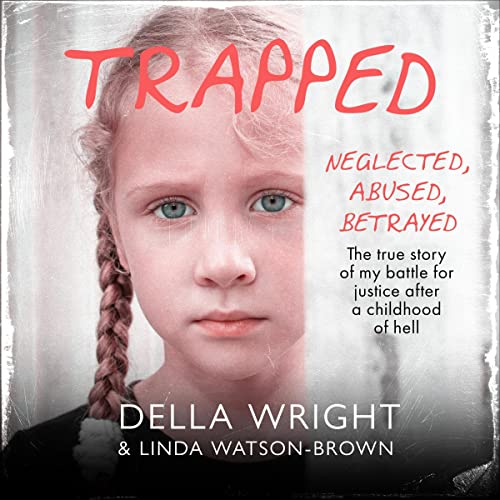 By: Della Wright,Linda Watson-Brown
Narrated by: Lauren Moakes
Try for £0.00

'I'd been the unwanted child, the little girl who got in the way. I swore I'd put my abuser behind bars and I'd fight with every breath in my body against the life sentence he'd given me. This was my time.'

Della Wright is an incredible campaigner for the rights of abuse victims after suffering a lifetime of betrayal.

Left alone at home for the first time at only two years old by those tasked with her care, Della was let down first by social services. When known paedophile Terry Price entered her life when she was six, moving into her home, he would groom and sexually abuse her for the next five years. Even the sight of a little girl going to his probation meetings wasn't enough to make the authorities act.

After a lifetime of violent relationships and mental health problems, Della eventually managed to put her childhood abuser behind bars for 22 years, a decade after first going to the police. He had changed his name multiple times to evade detection for his many crimes.

As an ambassador for the Safeguarding Alliance, Della now campaigns to ensure offenders cannot slip through the net by giving themselves new identities. She has vowed to try and stop anyone experiencing the same neglect, betrayal and abuse she did.

What listeners say about Trapped

I had listened to Della’s podcast with James English which inspired me to buy, and listen to the book. Cannot believe how this poor soul was failed by everyone and has the courage to tell the tale after all these years. You are truly amazing Della, I hope your mother is burning now, all that she deserves. I also hope that animal never walks the streets again. I wish you all the luck in the world for a brighter future xx

A harrowing journey told with bravery and dignity.

Della’s journey has been filled with so many truly awful incidents, so many preventable things. She has been let down again and and again and it’s hard to read just how many times the people who should have been caring for her, both family and the wider society turned a blind eye over and over.
Her story is told with dignity, bravery and determination to make a lasting change for future generations.
I know personally that Della has grown into a truly beautiful human being inside and out and the incredibly tough life she has dealt with, has not left her cold and hard, but caring, kind, open and determined to help our future generations by changing the law.
This book is a must read to understand not only her own personal journey, but the loophole that exists in the law currently and how she is tirelessly trying to change this.
I am immensely proud of all she has achieved and will no doubt go onto achieve in the future.