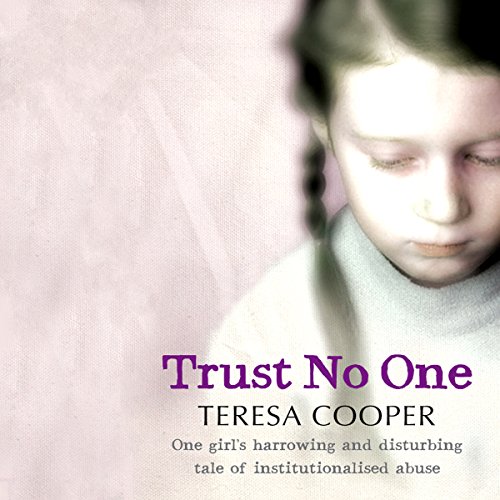 By: Teresa Cooper
Narrated by: Alicia Rose
Try for £0.00

Thrust into state care at six months of age because of an alcoholic father and mentally ill mother, Teresa Cooper spent an unsettled childhood in a variety of children's homes. At age 13, she was sent to Kendall House in Gravesend, Kent, a home which soon became her prison and worst nightmare. Teresa found herself a victim of a terrible regime: she was injected with dangerously high doses of drugs and sexually abused. As a result of this cruel and vicious treatment, accompanied by punishments such as 163 days spent in solitary confinement, it was not long before Teresa began to harm herself and even attempt to take her life. After three years of hell, Teresa thought her nightmare was over but another was about to begin. Teresa survived, however, and today she works to fight against a corrupt social care system. She has taken her case of abuse and drugging to Parliament, and is fighting to prevent many more children from suffering at the hands of unethical doctors and abusive foster parents. Teresa single handedly fought for the current CofE Kendall House review and helped settle many cases related to Kendall House. Teresa's story has appeared in the media on a regular basis and made world news several times. After a long and exhausting battle for justice, Teresa exposed the shocking legacy Kendall House left behind and the church later admitted: The children and grandchildren of Kendall House residents, were later born with birth defects. How many generations will suffer the legacy a church run home created?

What listeners say about Trust No One

My admiration for Teresa Cooper knows no bounds

Teresa Cooper a woman whi as a child faced/endured a childhood no xgild should ever have to face. How she survived is down to her strength and willpower when all seemed lost, she prevailed. Her fight to bring justice for all the children that suffer or go unnoticed at some care homes is an endless mission but much needed for future reference in order to stop this being repeated.
This was harrowing listening at times but a story that needs to be heard.
I wish Teresa and her family all the best.
She must learn to take care of herself not just others.

this book has many issues. 1st is sounds like it was recorded in someone's toilet. very poor sound quality.
2nd it feels as tho the story was written by a 12 year old.
I found all very repetitive.

One of the most heart wrenching books

To give this book 5 stars doesn't do it justice, it's deserving of so much more!! The young girl in this book has touched my heart like no other , she literally went through hell and back not once , twice but multiple times and I'm so amazed that she has had the strength to fight like she's done!!! I myself am a survivor of child abuse at the hands of my step-father & mother , however no where near Teresa's "rip your heart out " abuse/neglect . I have yet to face all of my "demons" and don't think I ever will , even as an adult I still have yet to find a trusting person with whom I can share and relieve myself of that burden even if it's just a little at a time . That type of abuse is harrowing and I have so much respect for her for continuing on , marching forward and getting results!!! May god bless you & yours, keep fighting , there are those of us who need you to keep us strong and focused ! Thank you !

I had never heard of Kendall House prior to listening to this audiobook. I enjoy true crime... this popped up & it sounded interesting so I decided to listen & I am glad I did. The accounts of what happened are disturbing but I appreciate the strength of the writer. These things happened & similar incidents continue to occur. Instead of ignoring the horrors or sheltering myself from them, I choose to be informed. This book is definitely informative, disturbing, & inspiring. Highly recommended!

A horrific tale of institutional abuse that needs to be read. History will repeat if it is allowed to remain secret

I want to thank Teresa for sharing her story, what an amazingly strong woman, true inspiration!!!

it grips you from start to end , you don't see most of the story coming .

An Incredible story of Overcoming and Preserving over Horrendous Obsticles

Spellbinding journey through the life of a little girl exposed to the abuse of the foster care system, ending up in an adolescent mental health care facility,because no other placement was available! Exposed to drugs that no normal child or even adult should ever be given. This took place in England but it happens in the US to this day. Narrated in a delightful cockney accent.

Heartbreaking to know this type of behavior occurs

What made the experience of listening to Trust No One the most enjoyable?

While it was very graphic & disturbing, I enjoyed the story & pray for the continued healing of this woman. She is a survivor of unspeakable acts & sad to know this behavior occurs & even in today's society. :(

What other book might you compare Trust No One to and why?

Haven't read much - not much to compare to.

She did a great job with the different personalities & was very engaging.

To the author and the editor/proofreader -- 'DISORIENTATED' is not a word! Look it up!

Teresa’s story is absolutely heartbreaking. There were times I had to stop the story and cry for the child that was very clearly lost and left behind. I wanted to grab her and squeeze the love she so desperately needed into her! It is horrible that there are places like this that exist, but it is also a much needed eye opener. The fact that Teresa came out of this experience and is the woman she is today is absolutely nothing less than a miracle! Her story will grab your heart and stay in your mind. Remarkably good listen.

A great book and a great narrator. Incredibly unbelievable something like this could happen even in the 80’s!! Makes me sick.. knowing this crap happens and so easily continues to happen. Everyone should read or listen to this book. They need to be informed. People need to open their eyes and fight for these children.

What I was getting myself into?

There's always those demons that you will never shake. But what a journey. Thank you for your story.