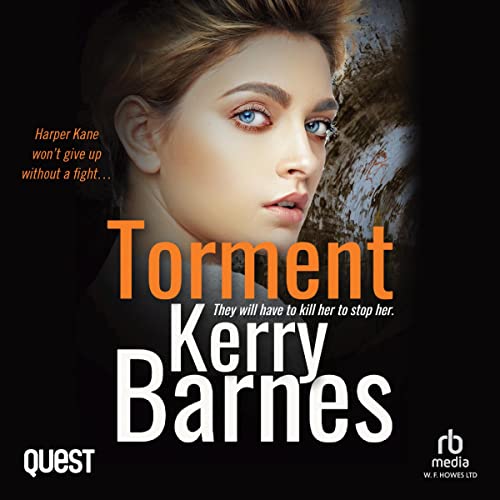 By: Kerry Barnes
Narrated by: Annie Aldington
Try for £0.00

When Harper Kane is ready to push her grief aside and take down Teddy Ryder, she is suddenly faced with more shocking news.

Working undercover in the field of human trafficking has its risks and Charley, Harper's sister, is missing. Her operations manager maintains she has been murdered.

However, despite seeing a photo of two charred bodies and a set of handcuffs covered in blood, Harper still believes that her sister is alive.

But Harper can't trust the police, so who can she trust?

If she is to find out what happened to her sister and uncover the secrets connected to The Click, then there is only one way to do it and that's her way.

To stop her, they will have to kill her.

What listeners say about Torment

the best ever couldn't put this down
annie Aldington makes my audible such a better read. loved it

Brilliant follow on in the Harper Kane story! the suspense keeps you hooked right until the very end. Narrated very well, like all the others.

If you like Martina Cole you will love theses Kerry Barnes books. Harper lane is brilliant I couldn’t stop listening

Kept my interest from the start, a good plot and narrative as usual from Annie

Really enjoyed the book, plot good and great characters; and love Annie as narrator. All as expected from Kerry

I hope this series carries on. Feisty women getting even instead of being victims!

excellent as with all Kerry's other titles the narrator brings characters to life.I cannot wait for her next book so come on Kerry.

An absolutely fantastic read and my favourite narrator. I could not put this down. Full of unexpected twists and turns.

Absolutely fantastic, I have listened to this at every opportunity over the last two days. Super sad it’s over. I do hope there’s another in the pipeline?
Thoroughly enjoyed it and as always the brilliant Annie brought it to life with her wonderful narration.