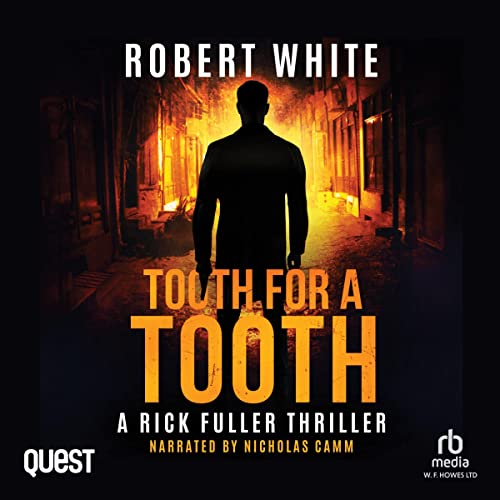 Tooth for a Tooth

By: Robert White
Narrated by: Nicholas Camm
Try for £0.00

Back from the brink, Fuller has a thriving business, money in his pocket and even a woman in his life in the shape of the UK's youngest Home Secretary, Rosemary Longthorn-Grey.

All is well, until he learns of the release of ex DCI Larry Simpson.

After serving just two years in a secure hospital, Lauren's killer is free and walking the streets of Manchester.

As the weeks and months pass by, Rick becomes desperate for revenge. It eats at him.

But, unknown to Fuller, there is another who seeks their own vengeance, another face from his dim and distant past. And they want Rick dead, just as much as he yearns for Simpson's demise.

Tooth for a Tooth is a quest for retribution, a battle for justice, and a fight to the bitter, breath-taking end.

What listeners say about Tooth for a Tooth

Need the next one asap!!!

What an ending. That’s so cruel!! I can’t wait for the next one, this was another hit for me.

Brilliant novel can't get enough of Ric Fuller and Co. Excellent job on story and love the narration. Can't wait for the next novel.

I would say that this book in the series is the best yet. It is fast paced and interesting and a great ending.

I finish the Rick Fuller novels with mixed emotions, obviously I can’t wait for the plot to unravel but I know I will have to wait, (assuming Robert White does a follow up).
The stories are gritty, full of cuts, bruises and good characters. They are written with a fast pace, so few words are wasted I. Getting from one point to the next. The detail is enough to explain without getting you stuck in technical details.
The main characters are great to ‘meet’, with multiple facets to their personality and as a reader you want to get behind them.
As much as it’s action packed, you don’t get a sense of a shoot ‘em up or simply fire and forget, in fact the body count feels like an overwhelming burden for the main character and at some point the bough will break.
The performer, Nicholas Camm has a couple of near misses with accents but he is a very good storyteller, so it is almost unnoticed and doesn’t distract.

I’ve really enjoyed this series of daring do and can’t wait for the next book to come out.

Best book of the series yet!!

Best I have read since the last Rick Fuller book. Great action from start to finish. Can’t wait for the next book in this series

The best story yet from Robert White

Well, love listened to all of these stories of Roberts.
They just get better.
It would be great if Netflix picked this fine work up.
Looking forward to the next one.
Thank you for an enjoyable listen.

Robert whites stories of Rick fuller are brilliant.
Read every book twice.
Can’t wait for the next.

Excellent as usual! Love the narration. Looks like they’ll be a sequel to this one. I’ll keep purchasing anything by Robert White!