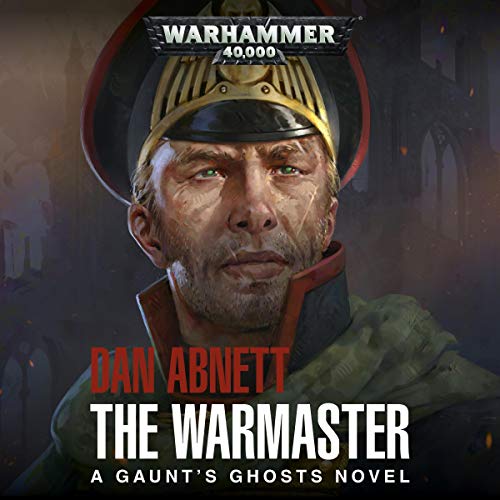 By: Dan Abnett
Narrated by: James Cameron Stewart
Try for £0.00

After the success of their desperate mission to Salvation's Reach, Colonel Commissar Gaunt and the Tanith First race to the strategically vital forge world of Urdesh, besieged by the brutal armies of Anarch Sek. However, there may be more at stake than just a planet. The Imperial forces have made an attempt to divide and conquer their enemy, but with Warmaster Macaroth himself commanding the Urdesh campaign, it is possible that the Archenemy assault has a different purpose to decapitate the Imperial command structure with a single blow. Has the Warmaster allowed himself to become an unwitting target? And can Gaunt's Ghosts possibly defend him against the assembled killers and war machines of Chaos?

What listeners say about The Warmaster

Only half a story...

A short story was cut out of the main novel and the main novel is really just a set up for the next novel. Some twists and reveals but little conclusion.

Worst book in the series

This book is pure filler. It's an obvious setup for the next book and lacks a lot of the story that makes the other novels such an enjoyable read. There's little action and what there is, has been done before. I could almost believe that this wasn't written by Dan Abnett, which is a shame because after 2 decades of reading his novels this one is the only bad book I've come across and it just so happens to be in my favourite series.

great stuff as always. Action and characters you love and hate. And love to hate.
big surprises and some real shifts that keep the ongoing series feeling fresh.
please don't make us wait so long for the next one.
I'm getting old. I might die soon. I want to read the end of the story

The flow and tone is all wrong and the characters are weirdly done with terrible accents. ruins what is a great novel.

Good story have read it many moons ago. But reckon theres to many characters for one narrator to capture.

Lovely to listen to ... Well done James. Really Excited About the Final Instalment.

Characters are sometimes referred to by their first name, second name, nick name, abreaveated name and sometimes rank. it makes the novel so much harder work than it needs to be. It realy takes away from my experience. Remembering it all is quite tricky for me. Lots of these characters arnt even built on so it feels even more annoying. The character of makeroth was great.

can't get enough of the Gaunts Ghosts stories. Every book just gets better and better

A really enjoyable listen but with a different narrator. I really liked the original Tony Longworth stuff and it took me a while to get used to the new voices by James Stewart. However by the end of the book I was thoroughly enjoying the story line in another great Gaunt's Ghost.

The ghosts series is amazing. This is another example of how good the novels from the 40k universe can be. I really hope that convert the other books in the series so I can buy them all.

Some characters voiced by the narrator are absolutely unbearable. Specifically the child Yoncy Criid when she is crying or whining the narrators voice gets so high pitched and shrill I cannot stand it. I still to this day do not know what happened during any scene where he uses this voice as I had to skip through them.

Outside of that the performance is well done. The voice acting is emotional and there is a vast variety of voices and the inflection and tone changes based on content which is very nice.

I had to deduct some points for the story as it feels incomplete. I cant go as far as to say its a short story as it is plenty long enough but it feels like there was a lot of padding added in some places to make it long enough and this book is just being used to set up the coming ones.

Worth the time and credit for sure, but beware the shrilling voice of the crying little girl.

I have read all of the ghosts books. Multiple times. I love the story and the characters. This is my first audio book of the series and it was excellently performed. I have waited 2 years for this...I am thoroughly disappointed. I will read it when my paper copy comes in, however, it feels like half a book.

Not a fan of these later books.

Audibles jump from the early books to these way later books seem to highlight a bit of change to the series. The first couple really got me interested, soldiers doing soldier things. And this one just lectured about and brought in heavy political views. I don't mind having powerful females in books/movies or anything and there is plenty of examples in 30k-40k. One of my favorites is the ship captain of Angrons ship it was literally like 30 - 50 books ago so I can't remember her name but speaking down to Angron of all people and making it believable... good Lord. I really enjoyed her character and command which says alot and puts a spot light on the issue of certain portrayal of female characters. The whole character part, make her real, make her believable, dont just throw in 20 thin "powerul" females to check off boxes. I do hate being treated like an idiot and pandered to for 10 minutes with a full breakdown of patriarchy. There is alot of strong female characters I enjoy, but sometimes it's just seems like it's shoveled on you and the whole Mulan surprise, I mean it wouldn't have been bad but why stop the story and break it down. Yeah I can say I didn't see it coming but did that really need to be the case? Could you not have explored a different way of delivering the politics of Felix's homeworld without a complete info dump complete with diagrams, PowerPoints, and laser pens? Maybe not pander for a significant length of time just after the surprise to ruin it. The last few books as well had a weird quality too them, I might relisten to the first one to compare but these seem to be like almost highlight compositions. Where is the thick of the fighting, the trenches the death, the chaos? There is a small bit in these last couple but it really seems like it's just 5-10 people in the whole regiment. The best way to describe it is that it feels like a soap opera in 40k audiobook form where I came for... you know... 40k. The Horus Heresy had a bit of it too between primarchs in certain books but this is like, way out there. I will probably listen to the next one in the series since it's the last on audible but that's it, I wish they had more of the series to bridge the gap a bit but going from those earlier books like I said dozens of times to these way later ones is pretty pretty jarring. I would say a pass on this one and the last one unless you just want to complete the Gaunts audiobooks for completions sake.

unfortunately the voice actor can not do women and children very well at all.

this narrator was unbearable when it came to female characters. the men were not as bad but the original narrator is so much better

this is an awesome book with damn terrible voice acting. absolutely ruined it. some of the characters are unintelligible.

blood and gore with language..

good overall story and performance, why does the author use PG language? fithing instead of "fuck", are we really worried about sugar coating a book about war for the kids? it doesn't get anymore adult than that for fith-sake!

Not a fan of the last two books.

Spoilers on this one.
The high command seems to be cowardly and idiotic and waits for Gaunt to do everything. Vanvoytz who seemed sharp in the early series is a weasel now along with others in high command seems more aimed at CYA than caring for the crusade. Then everyone like usual expects Gaunt to bail them out. I get driving a plot but Jesus they rely too heavily on one guy when the command has been in place for over a decade at this point.
This voice actor is better than the last one but still not as good as the first ten books. If it's not broken why fix it? The original guy from the first ten books made the characters his way and they were fun to hear and believable the newer narrators change that up. It's hard to believe or get into a book when after all those hours of listening different characters sound very strange or whiny etc.