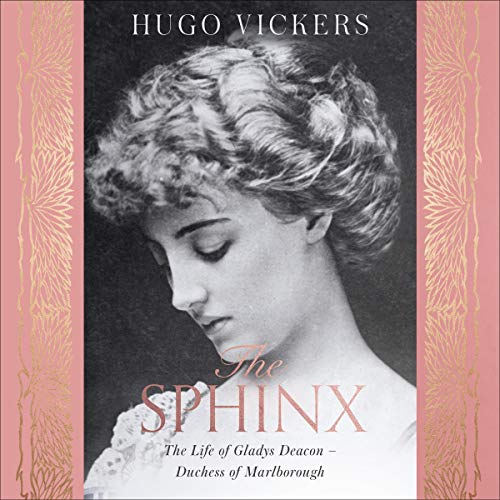 The Times Best Biography Audiobook of the Year 2021.

One of the most beautiful and brilliant women of her time, Gladys Deacon dazzled as much as she puzzled the glittering social circles in which she moved.

Born in Paris to American parents in 1881, she suffered a traumatic childhood after her father shot her mother's lover dead. Educated in America, she returned to Europe, where she captivated and inspired some of the greatest literary and artistic names of the Belle Époque. Marcel Proust wrote of her, 'I never saw a girl with such beauty, such magnificent intelligence, such goodness and charm'. Berenson considered marrying her, Rodin and Monet befriended her, Boldini painted her and Epstein sculpted her. She inspired love from diverse Dukes and Princes and the interest of women such as the Comtesse Greffulhe and Gertrude Stein.

It wasn't until she was 40 that she achieved the wish she had held since the age of 14 to marry the 9th Duke of Marlborough. Divorced from fellow American Consuelo Vanderbilt in 1921, she became his second wife. Now her circle included Lady Ottoline Morrell, Lytton Strachey and Winston Churchill, who described her as 'a strange, glittering being'. But life at Blenheim was not a success. When the duke evicted her in 1933, the only remaining signs of Gladys were two sphinxes bearing her features on the west terraces and mysterious blue eyes in the grand portico.

Gladys became a recluse. The wax injections she'd had to straighten her nose when she was 22 had by now ravaged her beauty. She was to spend her last 15 years in the psycho-geriatric ward of a mental hospital. There she was discovered by a young Hugo Vickers, who visited her for two years - intrigued and compelled to unmask the truth of her mysterious life.

In his fascinating and revealing biography, drawing on Gladys's personal archive and his own research all over Europe and America, Hugo Vickers uncovers a beguiling, clever, independent woman who was the brightest star of her age. He once asked her, 'Where is Gladys Deacon?' She answered him slowly, 'Gladys Deacon? ...She never existed.'

What listeners say about The Sphinx

disappointing with a lifeless narration

The story is lost in copious amounts of unnecessary facts that are incorporated into an already boring narrative. The narrator unfortunately reads like he is a professor reading from a PHD thesis, the story is therefore hard to follow and lost in monotone dialogue and distracting inconsequential facts that detract rather than enhance what could be an interesting and eventful story. Thoroughly disappointed couldn't even get to the end of this audio book

The story overall was interesting and I really wanted to listen to the end however the narration was dreadful. The author Hugo Vickers read the book himself and I found it hard going. Very flat and expressionless which spoilt the whole experience of listening.

Revealing portrait of an interesting and misunderstood woman.

From a previous review, I started this book fully expecting to dislike the main protagonist - how wrong I was!

Hugo Vickers takes us on a fascinating journey into the lives of those in the upper echelons of society from the late Victorian era to the mid twentieth century. The focus of our attention is Gladys Deacon, born to wealthy US parents leading a life of luxurious leisure in Europe. The marriage of the parents implodes in infidelity and murder... and that's just the beginning of Gladys' story.

The portrait, lovingly painted by the author, is that of a prodigiously intelligent woman and a born survivor, who struggles to fit in and conform to society's expectations of her. Today she would perhaps be diagnosed with high functioning Autistic Spectrum Condition - unheard of at the time, it presents differently in girls.

I thoroughly enjoyed the story of this remarkable woman, made even better by the fact it is narrated by Hugo Vicars. It gives it a very authentic feeling.

This is the best audiobook I've ever heard, and I try to listen to at least three a month! Fascinating, surprising and grippingly researched. Highly recommend.

My thanks to Hugo Vickers for sharing with us his personal account of this unique and truly remarkable life. What a treat! I have the urge to re-read instantly.

Very enjoyable and interesting piece of history. audio version pleasant to listen to as read by the author.

Could have done with more being made of the fortune teller to bind it all together. Generally a very interesting biography of an eccentric “British” duchess and made me think of what could have been and how getting what you want doesn’t always make you happy. She was a character that made me think of others who have since left this world and made it all the more boring for doing so.

I found this story fascinating and the performance by the author who read it was excellent .

This is without a doubt the best Audible book to which I have so far listened. I knew only of her fabulous beauty, the marriage to the Duke of Marlborough, and her disastrous decision to have wax injected into her face to correct a perceived blemish. Of her upbringing, family, and the spell she cast over a generation of European nobility, artists, and writers, I knew nothing. Hugo Vickers has done a huge service to the reading public to bring this bewitching subject to life, and furthermore reads his book aloud quite excellently.

About an exceptionally capable, forgiving and privileged yet abused person. A true survivor who lived to triumph over her life. A sort of unusual role model for people stuck in very strange relationships with someone they love.

After a visit to Blenheim Palace I felt compelled to buy this book and find out more about Gladys. Such a well researched and well written account it turned out to be. Well read by the author and it was an enjoyable bonus to hear a recording of Gladys’s voice in the first section of the book.

Enjoy listening to books on history and international figures in history. I truly make the most of my account!