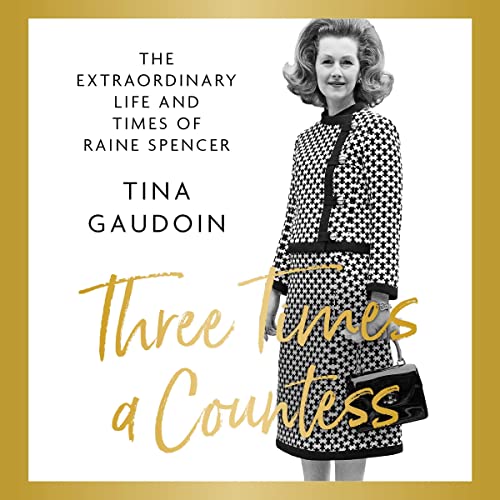 By: Tina Gaudoin
Narrated by: Alix Dunmore
Try for £0.00

Debutante of the year. Able politician. Femme fatale. Just some of the many labels attached to the irrepressible, controversial Raine Spencer: Countess, socialite and stepmother to Diana, Princess of Wales. But who was the real Raine? What was hidden behind the immaculately manicured public façade and her overwhelmingly negative tabloid image?

From her childhood days as daughter of romantic novelist powerhouse, Barbara Cartland, to Westminster councillor and wife of Earl Spencer, Three Times a Countess recounts Raine's compelling and glamorous life, revealing her to be a powerful, accomplished woman who, after a tumultuous relationship, reconciled with Diana to become the Princess's closest confidante and a key witness at the inquest into her death.

To her friends, Raine was shrewd, intelligent, witty and loyal; to her enemies, pushy, overly flamboyant and ruthless. From a career spanning local politics to dealing with the fortunes of Althorp; from taking on the Spencer family estate to her final role as a board member at Harrods, Raine's life was, by any standards, a success . Yet she could not sway the powerful media narrative which pitted her as 'the evil stepmother' at every turn.

A societal whirl of London Seasons, family feuds, politics, pomp and 'big hair', Gaudoin's vibrant history of the Countess sets the record straight once and for all, drawing insight from those who knew Raine most. Three Times a Countess reveals a sophisticated, determined woman whose loyalty knew no bounds and whose cache of secrets would have worried even the most upright of royals.

"A sparkling biography of a fascinating woman." (Lynn Barber, Telegraph)

What listeners say about Three Times a Countess

What a lovely book and how interesting to hear the parallels between then and now! I wasn’t expecting much but once I started I couldn’t stop - a must read

Brilliant and fascinating story made even more enjoyable having it read by the ear pleasing Alix Dunmore.

I would have returned this book, but I bought it, instead of using a credit. I've managed to listen to a couple of chapters, but to finish it would be torture. It is beyond boring. Listening to a book on taxation on rents would be more exciting. I blame Daily Mail for hyping the story up. I was utterly disappointed.