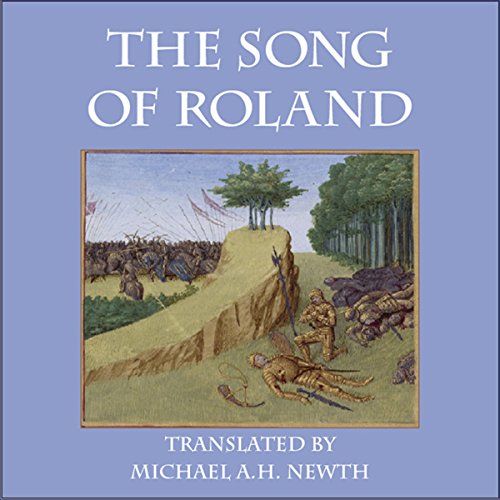 The Song of Roland

The Song of Roland is acknowledged today as the first masterpiece of French vernacular literature and one of the world’s greatest epic poems. Written down around the year 1090, The Song of Roland finely crafted verses tell of the betrayal and defeat of Charlemagne’s beloved nephew at the Pass of Roncevaux in the Pyrenees and of the revenge subsequently sought on his behalf. Although the identity of the surviving work’s author cannot be known with certainty, his poetic genius cannot be doubted. His mastery of chanson de geste compositional techniques transformed an historically minor military setback - the ambush and slaughter of the great emperor’s rearguard by a band of Basque highlanders in August 778 - into the most immediately popular and subsequently cherished artistic expression of medieval chivalry, kingship, national pride, feudal and Christian service in the Western world. The earliest extant example of a medieval chanson de geste (song of deeds), The Song of Roland’s 4,000 lines represent the most famous literary celebration of Carolingian mythology from the Middle Ages.

Michael Newth’s new verse translation of the “Chanson de Roland” - the first in English in over 50 years to preserve the full poetic diction of the medieval composition - recaptures the form, feel and flow of the original work in performance by restoring the genre’s “verbal music” to the The Song of Roland. This translation of the Chanson de Roland meets the need for a new version of the great poem for English readers of the 21st century, and it also highlights its potential as a viable piece of performance art. The audio book includes brief selections of medieval music interspersed between various sections.

What listeners say about The Song of Roland

This is an excellent production of a difficult poem. "The Song of Roland" combines intricate poetry with enough blood-and-guts to satisfy any fan of Homer. (More than once, a well-placed blow makes an enemy's eyes literally pop out of his head.)

The translation by Michael Newth does a good job conveying the virtuosity of the rhyme scheme, even with the poor choices for rhyme available in English. He does this by focusing on vowel sounds rather than consonants. In this scheme, "hope" would rhyme with "rope," but it would also - because of the equivalent accent and vowel sound - be considered an acceptable rhyme for "bone" and "boat." These vowel equivalencies can stretch out for 10-20 lines or more. Describing it thus, it may not sound that effective, but when you hear it, it does give the poem a steady rhythm, a sense of repetition and formal structure.

The readers, primarily Greg Marston, who does the narrative passages, do an excellent job. My one complaint about the reading, and the reason for its not quite making it to five stars, is that "choral" moments are less effective. At several points in the poem, "all the knights" or "all the Moors" speak in unison, and it doesn't quite come off; the voices are not always completely in sync.

The various sections of the poem are given clear separation with a delightful variety of music.

Best not to look too deeply into the politics of the poem. "The Song of Roland" is about as intolerantly Eurocentric as they come. If our current world situation weren't so fraught, it might be possible to consider the Moors in the poem as abstract, cartoon villains, and let it go at that. As it is, I found myself wincing at times. You definitely don't want to use "Roland" as a sourcebook for Christian/Muslim relations. But if you can temporarily set aside real-world considerations and look at the poem as if it were a medieval tapestry, it can provide a unique kind of aesthetic pleasure. This is by far the best version of the poem available on Audible.

Important. A bit jarring here and there.

This is a great piece of French propaganda. The Muslims are portrayed as cartoon villains, one dimensional to an extreme degree. Yet it is still worth reading. The poetry is magnificent. The battles are exciting, as is the intrigue. The narrators do a fine job.

The narration is a bit theatrical but well pronounced. Chapter 11 seems out of place.

Narration was very good except the effect when "everyone's" speaking sounds like an alien. Weird sound design choice.

A classic tale, well-performed, good window into the medieval mind, and not to be trusted as history.

I love the production of this audiobook. I have not read the Song of Roland in the original, but of the English translations I am familiar with, this and the work by Dorothy Sayers are my favorites.

This audio production is beautifully done, easy to listen to and easy to understand.

On Winning and Losing

This is an under-appreciated gem of the western canon. Yes, it’s culturally insensitive because it’s an authentic representation of medieval Christendom. But look past all the skull-splitting and the forced conversions and you’ll find timeless questions that deserve more reflection than most of us give them. Start with this one: Does Roland win or lose?