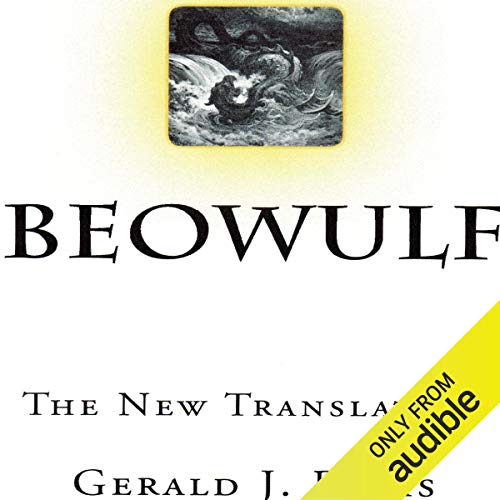 J. R. R. Tolkien, author of Lord of the Rings and The Hobbit, in his famous 1936 lecture, "Beowulf, the Monsters and the Critics", said, "Beowulf is among my most valued sources. It is a work of genius, rare and surprising in the period, and it is worth studying. In Beowulf we have an historical story about the pagan past. Beowulf is not an actual picture of historic Denmark or Geatland or Sweden about 500 A.D. But it is, on a general view, a self-consistent picture, a construction bearing clearly the marks of design and thought. Beowulf is, indeed, the most successful old english heroic elegy."

The origins, history and authorship of Beowulf are shrouded in uncertainty. This heroic epic probably began, as most do, with a wandering troubadour strumming a stringed instrument, sitting before a hearth-fire, and singing the verses to a spellbound audience arrayed before him. At some point, the words of the troubadour were inscribed in manuscript form, in order to preserve the story for posterity. The events depicted in this story take place during the late fifth to early sixth century. However, there is great dispute among scholars as to when the manuscript itself was actually transcribed. Tolkien believed it was written about the eighth century, while other serious experts assert it was written as late as the early 11th century. Beowulf is a rousing adventure story, filled with intrepid heroes, monsters and fire-breathing dragons, which can be listened to for the sheer enjoyment of the tale.

What listeners say about Beowulf: The New Translation

Part of our heritage

I am now reading Beowulf in another translation. I would never have begun, had it not been for this audio version. It is an ancient and demanding text, and I had not before got further than a few pages. Listening to it - in Hanks sonorous, stentorian but surprisingly appropriate voice - I have at last grasped its extraordinary power. Thank you.

I got this audiobook for free with an honest review and since I've always wanted to read Beowulf I was looking forward to it. I'm not sure of anything to say specifically about the translation itself although I enjoyed the forward and explanations, and the text was seamless enough for my tastes. Having never read Beowulf elsewhere however I have nothing to compare it to. One thing I would say is that I think this was one story better read than listened to. I love audiobooks and typically follow and comprehend them very well. Additionally the reader for this audiobook did a superb job and I think his voice was the perfect fit for the classic tale. However, I did have trouble following it. I feel like I got the gist, but my overall comprehension and retention were not what I would like. I think I will definitely need to give it another listen or two, or pick up a text copy so I can really dwell on lines instead of having them pass me by.

Overall if you're looking for a copy of Beowulf I have no scruples about recommending this one, or the reader, as both the translator and reader did an excellent job. Just be prepared for subject material that might take a little more concentration than other stories.

Where does Beowulf: The New Translation rank among all the audiobooks you’ve listened to so far?

This is the third time I have tried to post a review for "Beowulf: The New Translation" by Gerald J. Davis. The other two reviews? Lost during computer malfunctions. What I was trying to say in those reviews, In a nutshell, is that through no fault of the author, I became confused a couple of times. When I realized there were stories within the story it all started making sense to me again. Beowulf is known by other names. That took me a while to figure out. In the end I felt that "Beowulf: The New Translation" by Gerald J. Davis was well presented and kept my interest throughout. A translation like this is not everyone's cup of tea but I think Gerald J. Davis will have more readers/listeners finding themselves carried away by the epic story of Beowulf if they give it a go.

Which character – as performed by John Hanks – was your favorite?

All characters.The narrator was brilliant. Bravo.

What the world needs today is a Beowulf

Thank you to Gerald J. Davis for the free copy in return for an unbiased review.(I hope my review passes muster :-) )

I have never read or listened to any translation of Beowulf. I found this translation easy to understand and follow. It's a good story and interesting for it's historic value. I will seek out other translations by this author. The narration wasn't bad, just a little low and slow. It was much better at 1.25 speed, but since I was not familiar with the story, I kept it at regular speed so I didn't miss anything.

I received a free copy of this book in exchange for an unbiased review.

Would you consider the audio edition of Beowulf: The New Translation to be better than the print version?

The narrator did a excellent job telling the story and bringing the reader into the story.

Beowulf because of his battles with Grendel's mother and the dragon.

He did a excellent job.

Disclaimer: I received this audiobook from the translator in exchange for an honest review

I read Beowulf in high school and enjoyed it, but would have had a greater appreciation for it had I heard this version. I found this audio version of Beowulf to be beautiful and poetic. While the story itself is powerful and timeless, Davis' translation and Hanks' narration improve upon it. John Hanks is a hidden gem, his voice is broad and resonant and he can voice whimsical passages as skillfully as he narrates more serious, dramatic scenes. This is a beautiful story, beautifully told... my only complaint is that at 3 hours and change, I enjoyed it so much that I wished it were longer. Highly recommended

Would you listen to Beowulf: The New Translation again? Why?

Absolutely! Sometimes a work of literature is a bit timelocked. It is a rare translator who can slide the eloquence and power of a work into a more modern, comprehensible rendition.

What does John Hanks bring to the story that you wouldn’t experience if you just read the book?

I am wowed by his voice. It resonated and energized the words and meaning as if from a podium.

A good translation of an ancient text

An archetype of English adventure. It celebrates the virtues of brotherhood, loyalty, generosity, goodness, and strength. John Hanks does an adequate job in his reading, though it could have been loads better.

I tried two other translations or two other readers before settling on Gerald Davis’ translation read by John Hanks. Beowulf is a foundational story that has many themes that resonate later in English literary history up to and including the Lord of the Rings. I highly recommend it to my fellow readers.

A great read and highly recommend

“Beowulf” is one of the books on my “bucket List” to read and I now have experienced this classic legend. The translation was smooth and made the expressions of that time period understandable in today’s language. WOW, the brutality, values, and expectation of Beowulf and his fellow warriors comes thru the words in the poem. There defiantly is a clear understanding of the presence of GOD in their lives and a hope for the afterlife for being faithful and just. Worth the time investment in reading and highly recommend. Reading several times would contribute to the fullness of the experience. Experienced as an Audio book.

Great story to listen to

I really enjoyed this version of Beowulf, the story started as a little difficult to follow but ended up being a great story overall.
John Hanks narration of this story was phenomenal he is great to listen to.