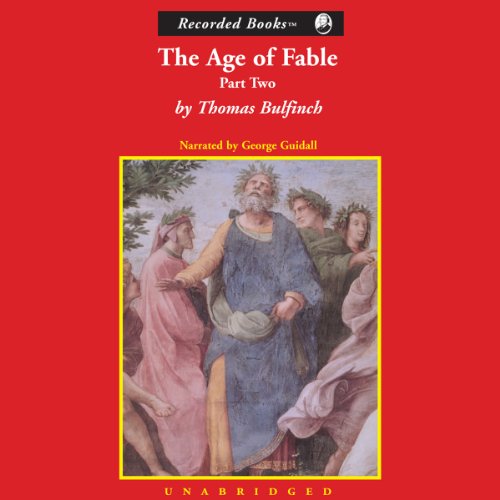 By: Thomas Bulfinch
Narrated by: George Guidall
Try for £0.00

Narrator George Guidall provides a splendid narration of this two-part classic reference work. In Part 2, Guidall offers further stories from the Golden Age, before turning to Eastern mythology, Norse mythology, and the Druids. Guidall is remarkable with women’s voices, softening his natural timbre just enough to create the necessary illusion. Although Bulfinch treats Eastern mythology and Norse mythology with informative explanations rather than traditional storytelling, Guidall still manages to engage by recounting the accounts of Prester John, Beowulf, Thor, and the Nibelungen Lied. Guidall turns this into a must-have audio experience for anyone wishing to understand our cultural iconography.

Ancient myths link students to a powerful cultural history. Bulfinch captures these fables in one graceful, lyrical collection which has been a standard reference for over 140 years. Part One includes the tales of Prometheus, Hercules, and Ulysses. Part Two includes Aeneas, Thor, Beowulf, and other heroes.

What listeners say about Age of Fable, Part 2

Herein lies one of literature's greatest classics, for these are the fables from which so much modern culture and religion derive.