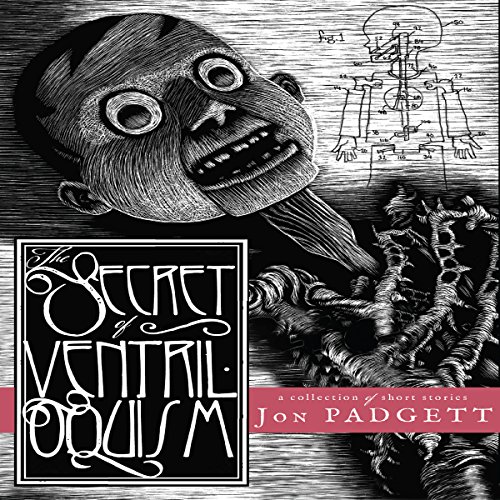 The Secret of Ventriloquism

Jon Padgett's The Secret of Ventriloquism, named the Best Fiction Book of 2016 by Rue Morgue Magazine, heralds the arrival of a significant new literary talent. With themes reminiscent of Shirley Jackson, Thomas Ligotti, and Bruno Schulz, but with a strikingly unique vision, Padgett's work explores the mystery of human suffering, the agony of personal existence, and the ghastly means by which someone might achieve salvation from both.

A bullied child seeks vengeance within a bed's hollow box spring. A lucid dreamer is haunted by an impossible house. A dummy reveals its own anatomy in 20 simple steps. A stuttering librarian holds the key to a mill town's unspeakable secrets. A commuter's worldview is shattered by two words printed on a cardboard sign. An aspiring ventriloquist spends a little too much time looking at himself in a mirror. And a presence speaks through them all.

What listeners say about The Secret of Ventriloquism

Amazon seemed convinced that this was the book for me. Trust your algorithmic overlords! It’s a gem. Strange places and events await you. You visit a twisted tourist attraction, you are compelled to explore a poisonous old factory, a homeless man hands you a disturbing sign. You chance upon a book which offers the secret to Greater Ventriloquism.
It’s like Ligotti (the author is friends with Ligotti). But really it has its own style. Padgett is a great reader of his work. I would also love to hear him reading Ligotti.
It’s not long but seems longer as there is so much that’s interesting. I want to listen again but they are so creepy... and surely there is a cost to learning Greater Ventriloquism.... it’s just a trifle though... if I just get my puppet and stare in the mirror just a while longer... ? Right???

Reads like a college student trying to impress their teacher with everything they learned in the first semester.

Unsettling nightmares In the same phantasmagoric vein as Songs of a Dead Dreamer by Ligotti.

Would you consider the audio edition of The Secret of Ventriloquism to be better than the print version?

I've been excited about this book since it was announced and I'm pleased to say it was worth the wait. Jon Padgett has created a mythology, no a universe populated with characters eccentric and horrific where nothing is at all what it seems.
The author as reader is always an excellent idea as who knows their character's thoughts better than the god who created them?
Highly recommended.

If you love weird horror, I can't recommend this enough. Super fun! I only wish there was more fiction by this author available on Audible. And his narration is remarkably good considering that he's also the author - too much of the time that doesn't work out, but he really hits the mark. 10/10 would recommend.

Would you listen to The Secret of Ventriloquism again? Why?

Yes. Jon's narration adds so much to the already amazing stories.

What other book might you compare The Secret of Ventriloquism to and why?

Closest comparisons would have to be authors such as Thomas Ligotti, Laird Barron, H.P. lovecraft, Poe, and Orrin Grey. They match in tone and quality.

If you could rename The Secret of Ventriloquism, what would you call it?

No need to rename it. It's the perfect title for what it is.

I suggest purchasing an book or physical copy as well as the audiobook. If I were only able to purchase one and was on the fence about which, I'd go with the audiobook. As I stated before, Padgett's tone and pace add so much more to the already heavy fear factor.

The precise edge I wanted

I am nearly speechless. This is precisely the book I hoped I was purchasing. Let it be known that it is indeed open ended and highly speculative, but it is beautiful. TSOV is perfect for those with highly active, vivid imaginations; also for those with any interest in the void and nihilistic philosophies.

It’s exceedingly difficult for me to choose a favorite story, but The Indoor Swamp is the one I am still ruminating on the most. Excellent work weaving the stories together in ways that are not impossible to follow, but also not so easy as to be predictable. I will be spending a lot of time reflecting on these stories and pulling out all of my favorite quotes…

Right up there with the best of short story horror.
Fantastic writing as well as narrated.
Thank you.
Look forward to more from this Author.

A collection of beautifully terrifying stories that sticks with you. Truly iconic tales with narrations that perfectly sets the mood for their creeping dread. Instant love for this collection and Padgett's work.

A modern classic of weird horror

incredible writing and performance by the author, Jon Padgett. A mosaic of strange stories, meditations, instructions to become a Grand Ventriloquist, and even a one act play tell an unsettling story that will stay with the reader/ listener long after you depart on the train to Thin Mountain. Highly recommended!

Entertainingly creepy at times, but the stories tended to run together. I know they’re kinda supposed to!

I had the perhaps unusual experience of having heard several interviews with the author before listening to this book. This gave me quite a bit of context that richly enhanced my enjoyment, without (as it turned out) any spoilers (except for, y'know, that one time where the guy finds that thing in that place -- but it's hardly a "spoiler"; it spoiled nothing). I don't necessarily recommend this approach, it just happened to work out nicely for me.

Oddly enough, though, this background did not prepare me for the exquisiteness of his writing. I reckon I'd attribute this largely to the author's laudable humility, as well as the fact that I found him so articulate and engaging in those interviews that I didn't even really think much about the text itself.

Having listened to his voice for a total of, gosh, like three hours, and hence having grown quite accustomed to him telling his own tales, I was psyched to learn that he performed this audiobook. Rightly so, it turns out. He's frickin' great.

I fear that with his own successful craftsmanship of this long-toiled-over book, the author will find he has set a dauntingly high bar for himself to match with subsequent efforts. I even hesitated to write this out of fear that my own praise will add a drop to that bucket. So I gotta implore him to do his best to disregard any such concern (including disregarding this review if that helps), and just keep crafting new stories for his own enjoyment, moment by moment, putting one word in front of another. Psyched for him to share future stories when the time comes tho.

One last thing -- I sure hope I someday get to see a production of the creepy af one-act play in this collection. If you're a theater person looking for sinister material, yo, the piece in question might just make yer head spin....