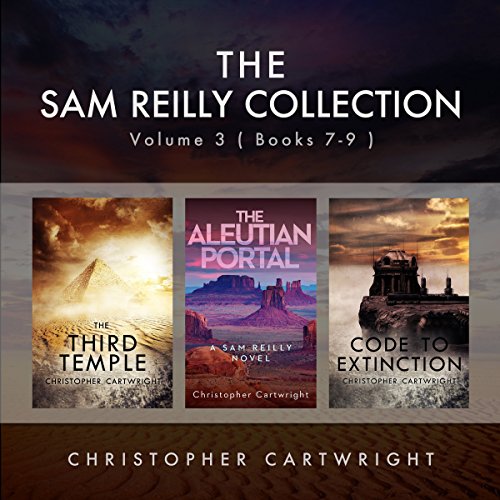 By: Christopher Cartwright
Narrated by: David Gilmore
Try for £0.00

The next three novels in the Sam Reilly series!

A mystery wrapped in a myth about the origins of humanity. A race to find an ancient pyramid hidden in plain sight. A secret so dangerous its guardians will kill to protect it. And an ancient covenant that might save the world or destroy it completely.

In 1655, a group of explorers from the Emerald Star entered the Namibian desert in search of an ancient relic rumored to be hidden in a secret temple. None of the crew ever returned - but stories of their mysterious demise continued to be told.

In the present-day Turkish subterranean city of Derinkuyu, a strange wooden placard is discovered floating in an old well. It’s covered in the script of a language long forgotten, but Sam Reilly has seen the text before. The words suggest an ancient race might still exist and is in the process of building a new temple.

The question is: Is it the same temple where Dr. Billie Swan is being held prisoner?

A Russian cargo ship sinks in the shallow waters of the Bering Strait and somehow vanishes without a trace. In the Colorado Plateau desert, a cowboy follows a river of sand into an undiscovered ruin. A tunnel-boring operation between the Alaskan and Siberian peninsulas is stalled when its largest burrowing machine disappears into an abyss.

Sam Reilly leads a search and rescue mission for the missing ship and crew. What should be a simple operation quickly turns into something much more dangerous. He soon learns all three strange events are irrevocably interwoven, and unlocking their connection may just hold the key to the survival of the human race.

Extreme weather conditions are wreaking havoc on the world, and baffled scientists are unable to discover the cause. The most powerful hurricane in history approaches New York, while at the same time atmospheric rivers flood Las Vegas. Wildfires spread through Canada, and Europe is wracked by powerful earthquakes.

Most bizarre of all: A tempestuous mass of dark, foreboding sky seems to be spreading across the globe.

In Arizona, an astronomer tries to decipher the hidden message inside a 13,000-year-old megalithic stone, which just might hold the key to everything.

Can Sam Reilly and his unique team break the code to extinction?

What listeners say about The Sam Reilly Collection, Volume 3

I really enjoyed this story, it was an exciting and intertwined story that rolled over the the books nicely.

the narrator was excellent as usual, I always enjoy listening to him. He speaks clearly and with enthusiasm, he also had a good go at the accents.

I will continue to listen and enjoy this series of books

This audiobook was given by the author, narrator, or publisher at no cost in exchange for an unbiased review via Audiobook Boom.

It just keeps getting better and better!

Sam Reilley is a wealthy marine biologist that, with his friend and co-worker Tom, goes on hunts for various mythological items. He goes on several adventures, with each story detailing one or more treasures to be found. Finding the treasures often involve dangerous trials, including battling with the “bad guys”, and saving the world from destruction.

Volume 3 of the Sam Reilley Collection contains the following stories:

The Third Temple (Sam Reilly Book 7)
In this story, Sam searches for an ancient pyramid with deadly secrets. Evidence of an ancient race arises which ties into other investigations Sam is involved in. So much history and fascinating facts in this one, what a beauty!

The Aleutian Portal (Sam Reilly Book 8)
Sam is leading a search and rescue mission for a missing ship and crew that disappeared without a trace. When Sam discovers that this was not the first ship to disappear and an undiscovered ruin is located, he realises that all these events are connected and he must solve the mystery to save the word. Packed full of action and intrigue, this is a must read!

Code to Extinction (Sam Reilly Book 9)
Extreme and deadly weather conditions along with a darkness in the sky means that Sam must discover the code to extinction hidden in an ancient stone to save the world. I absolutely love this one! Very interesting!

The stories are packed with descriptive scenes, life threatening situations, fast paced action and archaeological treasure hunting. They are cleverly unraveled to keep the listener excited and intrigued throughout, not to mention to hear the next stories in the series. The genre reminds me of Indiana Jones, James Bond and the like. Not only are they filled with action and adventure, I feel that I was also educated by them. There are so many fascinating facts coming through about various mythological things, some of which I had heard of and learned more about, and some that I hadn’t heard of before and learned all about in the books. The stories are well written with cleverly built up plots and characters, including twists and turns throughout. They follow a series with ongoing relationships and themes, but with a new adventure each time. Sometimes other stories are mentioned in other books that elude to future upcoming adventures, or previously completed adventures. The series is absolutely addictive and interesting and I cannot wait to hear the next ones!

David narrated expertly. With excellent intonation for various characters and energy and passion throughout the series. He was a perfect fit for what I believe the stories’ perspectives to sound like. There were also some interesting audio elements coming through like hearing two people speak at the same time and hearing people speak through voice scramblers. Overall, the performance was masterful and absolutely added to my enjoyment thereof.

I highly recommend this series. Be warned though, once you start you may not be able to stop!

Note: This book was given to me for free at my request and I provided this objective review voluntarily.

This is my third set of the Sam Reilly Collection, Volume 3.
Still great! Books 7 through 9 are awesome, great historical information and awesome and intense mysteries.
Great set, I've loved all of them so far, and am not stopping now! :)
Highly recommended, great listens.
Writing and narration are both stellar.

I was given this free review copy audiobook at my request and have voluntarily left this review.
Please take a moment to click the "YES" ("Helpful") button below if you found this review helpful :) Thank you! :)

These books were just great! Honestly, you crave the next book when the preceding one completes!
10/10 Recommend!

Great collection of mystery, imagination, intrigue and adventure. Hours to enjoy with good narration. Given audio for my voluntary review

Christopher Cartwright’s Sam Reilly Books fill a need in me for the adventurer that never got the opportunity to blow stuff up—These Are The Most Intricately Woven with Intrigue and Imaginative Situations & Technical Devices & Interesting Situations in Possibly Unheard of Global Locations, Encountering Things Never Imagined—Indiana Jones in My opinion has nothing up on Sam Reilly! The Audiobook Story of Christopher Cartwright’s Sam Reilly Books are the most imaginative I have ever found and David Gilmore’s Narrative Performance is very good!

This is the third volume of the Sam Reilly Collection that we have heard. These are great listens. The stories are enjoyable with some mystery and historical facts.
The narration was excellent. Glad the same narrator narrated all the books so far.
Will listen to more by this author.

I absolutely loved it! The narration is superb and gives the story that extra flair! It will keep you entertained. The author does a great job with the character builds and plot. I have read the previous volume and look forward to reading the next. I was given this free review copy audiobook at my request and have voluntarily left this review.

This book continues the story of Sam and his crew. The first book is the search for the third temple and a group called the builders.

Each book builds well on the previous books and leads well into the book that follows.

The story is well written and all the books are tied together well.

The narration of the book was good.

This book was provided free of charge with the expectation of an honest review.

Sam reilly does not fail to provide entertainment. Chris cartwright is an innovative writer, better than Cussler and I do love Cussler. David Gilmore is excellent as a narrator... Great listen!!!