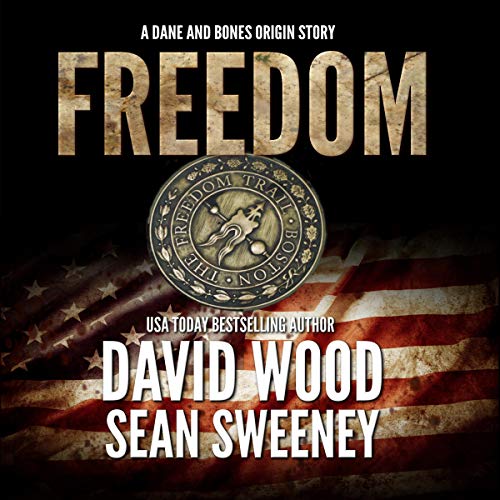 By: David Wood,Sean Sweeney
Narrated by: Jeffrey Kafer
Try for £0.00

What dark secret did the Founding Fathers of America hide, and who will stop at nothing to uncover it?

Navy SEALs in-training, Dane Maddock and Bones Bonebrake can't be in the same room without trying to kill each other, but soon find themselves caught up in a race with a secret society to solve a mystery that dates back to the founding of America. Find out how it all began in the action-packed first Dane and Bones Origins novella... Freedom!

Praise for the Dane Maddock Adventures:

"Freedom rocks! David Wood and Sean Sweeney serve up a great story of how it all began. Dane and Bones are in perfect form as they unravel a devilishly clever historical mystery that traces back to the early days of the nation." (Sean Ellis, author of Fortune Favors)

"David Wood has done it again. Quest takes you on an expedition that leads down a trail of adventure and thrills. David Wood has honed his craft and Quest is proof of his efforts!" (David L. Golemon, Author of Legacy and The Supernaturals)

"Ancient cave paintings? Cities of gold? Secret scrolls? Sign me up! A twisty tale of adventure and intrigue that never lets up and never lets go!" (Robert Masello, author of The Medusa Amulet)

"Let there be no confusion: David Wood is the next Clive Cussler. Once you start reading, you won't be able to stop until the last mystery plays out in the final line." (Edward G. Talbot, author of 2010: The Fifth World)

"An all-out blitzkrieg of a globe-trotting mystery-adventure that breaks from the action just long enough for a couple of laughs." (Rick Chesler, author of kiDNApped and Wired Kingdom)

"David Wood captures all the adventure, twists and surprises, camaraderie, and treasure you could hope for in an action series." (Kane Gilmour, Author of Resurrect and co-author of Ragnarok)

What listeners say about Freedom

I loved the narration of Jeffrey Kafer

I really loved this first start of this series. We meet Bones and Dane, these two do not get on... after a fight these two find themselves forced to spend time together. An adventure starts, truth of Washington and the Sons of Liberty is unfolded.

Thoroughly enjoyed the book. Good banter of dislike between the 2 main characters. Enjoyed listening to how they came to understand and eventually value each other. The historical story the wove through the story was interesting as the clues led through the historical landscape. I liked the voice of the narrator, a deep 'booming' style which I could well imagine a six and half foot native American could sound like! It was equally effective for a 'stick in the mud' 'by the book' guy as well. I recommend this story.

LOWER PEOPLE'S EXPECTIONS AND IT'S EASIER TO TAKE

THEM BY SURPRISE
These guys like to write about history, with a heavy dose of conspiracy theory. This involves the founding fathers and a secret society. I did not get into this story, but the concept is a fun one and I will continue the series. I do like the characters. Good characters can cover for a meh story.

I'LL SPEND HALF MY PAY ON CHEAP BEER AND WOMEN, THE OTHER HALF I'LL WASTE.

Freedom is an amazing work of fiction..

If you could sum up Freedom in three words, what would they be?

What other book might you compare Freedom to and why?

Indiana jones, Allan Quatermain, The Fargo Adventures, because there all treasure hunting adventure Books that are Highly Entertaining.. & they save the world a few times as well :)

yes he is a very talented Narrator highly enjoyable..

A novella full of intrigue, action and friendship. While I listened to this I couldn't help but smirk every now and then when something was revealed or happened that had been eluded too in other books (the Dane Maddock Adventure series), it's one of the reasons I like origin stories but this one seemed to do it better than most. A talent that David Wood seems to have at capturing a readers attention. It was really interesting seeing how Dane and Bones' friendship came to be. I listened to it in one sitting...it is that good. Kafer did as he always does and captivates the listener as he tells the story as only he can.

Interesting Take on the Revolutionary War

First let me say that the narration was great. I enjoyed Mr. Kafer's acting of the characters in the book and thought he brought them to life. For the story, 3.5 stars, an interesting take and a new twist on a theme I have seen before. However, I really liked the characters of Dane and Bones and will look into more of their stories.

It could’ve been history or was it. I started this book thinking maybe it was not for me, but once I got into the meat of the book I couldn’t put it down, the narration was good, the author did an outstanding job of pulling this book together...Yes I would recommend this book

If you really want in

Nice story about the beginnings of friendship and how one can find unexpected friends when least expecting to. Nice foundation story for the series.

I found this book a really good read. The narrator is excellent and keeps you in the story.

Pretty shallow mystery, along the lines of those movies about finding secrets in the constitution etc. I hope the rest of the series is better not sure if I dare waste a credit on the next one or not. OK narration. It great but ok with a limited cast.

Freedom is short novel but either way it is a full-length fantastic book, and the narrator did a good job reading this audiobook. It is another great offering in the Dane Maddock series.