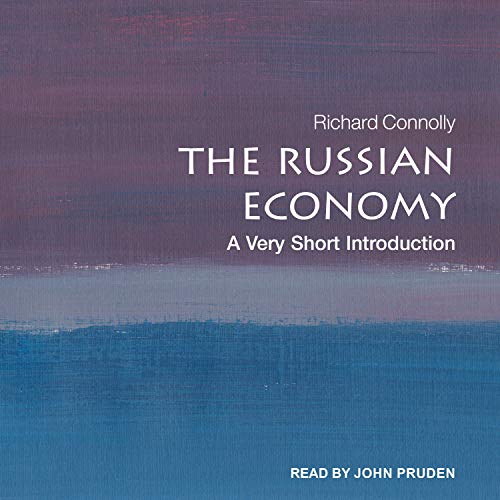 By: Richard Connolly
Narrated by: John Pruden
Try for £0.00

Russia today is as prominent in international affairs as it was at the height of the Cold War. Yet the role that the economy plays in supporting Russia's position as a "great power" on the international stage is poorly understood. For many, Russia's political influence far exceeds its weight in the global economy.

However, Russia is not only one of the world's most important exporters of oil and gas, but also of other natural resources, such as diamonds and gold. Its status as one of the largest wheat and grain exporters shapes commodity prices across the globe, while Russia's enormous arms industry, second only to the United States, provides it with the means to pursue an increasingly assertive foreign policy. All this means that Russia's economy is crucial in serving the country's political objectives, both within Russia and across the world.

This Very Short Introduction introduces listeners to the dimensions of the Russian economy that are often ignored by the media, or exaggerated and misunderstood. In doing so, it shows how Russia's economy is one of global significance, and helps explain why many of Russia's enduring features, such as the heavy hand of the state and the emphasis on military-industrial production, have persisted despite the immense changes that took place after the disintegration of the Soviet Union in 1991.

What listeners say about The Russian Economy

Very helpful for understanding Russia's present economy with perspective on how it got where it is based on its past. Discusses how Russia has been affected by semi-recent downturns (2008,2015) and Russia's economic outlook. Refreshingly free from anti-Putin bias. Outstanding narration.