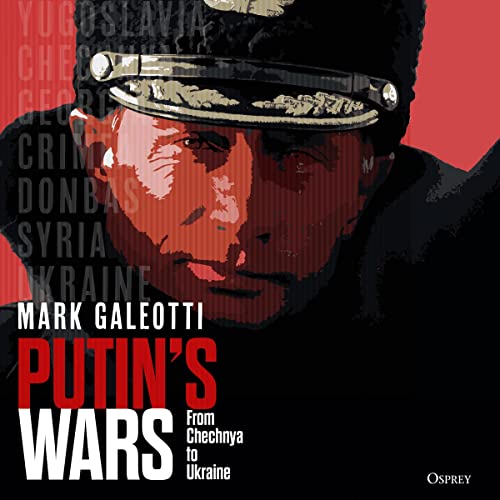 By: Mark Galeotti
Narrated by: David Sibley
Try for £0.00

A new history of how Putin and his conflicts have inexorably reshaped Russia, including his devastating invasion of Ukraine.

Putin's Wars is a timely overview of the conflicts in which Russia has been involved since Vladimir Putin became prime minister and then president of Russia, from the First Chechen War to the two military incursions into Georgia, the annexation of Crimea and the eventual invasion of Ukraine itself. But it also looks more broadly at Putin's recreation of Russian military power and its expansion to include a range of new capabilities, from mercenaries to operatives in a relentless information war against Western powers. This is an engrossing strategic overview of a rejuvenated Russian military and the successes and failures on the battlefield. Thanks to Dr Galeotti's wide-ranging contacts throughout Russia, it is also peppered with anecdotes of military life, personal snapshots of conflicts, and an extraordinary collection of first-hand accounts from serving and retired Russian officers.

Russia continues to dominate the news cycle throughout the Western world. There is no better time to understand how and why Putin has involved his armed forces in a variety of conflicts for over two decades. There is no author better placed to demystify the capabilities of the Russian military and give a glimpse into what the future may hold.

Putin's Wars is an engaging and important history of a reawakened Russian bear and how it currently operates both at home and abroad to ensure Russia is front and centre on the world stage.

What listeners say about Putin's Wars

As a fan of Mr Galleoti’s podcast, I greatly enjoyed this book. My only gripe is the cursory look at how Russian intelligence services impact the overall trajectory of the regime. The chapter on the 90s was deeply illuminating. Would definitely recommend. Be warned at the heavy military minutiae focus. I definitely loved it.

Great stuff as always from Mark Galeotti on Russia. Pity he didn't read the Audible version himself because he does it very well on others (and has a brilliant podcast), but the narrator David Sibley is excellent, too, so certainly not a complaint.

There are very few books that delve into the hard to penetrate subject of murky Russian wars, and even fewer that take an unbiased, facts-only approach. This is an incredibly well written and researched book that apart from being an enjoyable read contains the level of detail that can be used for academic research. In my opinion this is by far Mr. Galeotti’s best work.

Says much about Putin's attempt to build new model army which has failed so badly in Ukraine. Must read.

It is always difficult to write about contemporary events in a historic way, yet Galeotti does so with wit and drive. This is a deep book and some times the orders of battle are confusing. However as an analysis of Putin and his armed forces it is written by a paramount authority. It should be on the reading list of anyone interested in Putin, NATO and Europe. I commend this work as an accessible guide to the complexity of Putin’s Wars.

This repeated quote is a good summation of Dr Galeotti’s new book. He provides a potted history of Putin’s wars leading up to his invasion of Ukraine. Throughout he explains the evolution of the Russian armed forces. Interspersed with anecdotes of his experiences meeting various figures within the Russian forces.
I found it a fascinating study of Russian culture and how it has been subverted by delusional leadership. The most interesting part must be listening to this in light of current events, not just in Ukraine but all around Russia’s borders, and how this is shaping the worlds view of Russia. This is literally living history.

The laudable effort by the narrator to take on Russian last names and dozens of transliterations would be a success hadn’t he botched most of the stresses (accents). Almost every Russian surname, including those of all ministers of defense in 30 years, is pronounced incorrectly, despite transcriptions readily available everywhere starting from Wikipedia.

Well researched, and very informative. I would recommend this to anyone who wants to know more about contemporary Russian military history. Interspersed with amusing anecdotes and eyewitness accounts.

I consider this book one of the most scientific and analytic writings concerning Russian military raise.