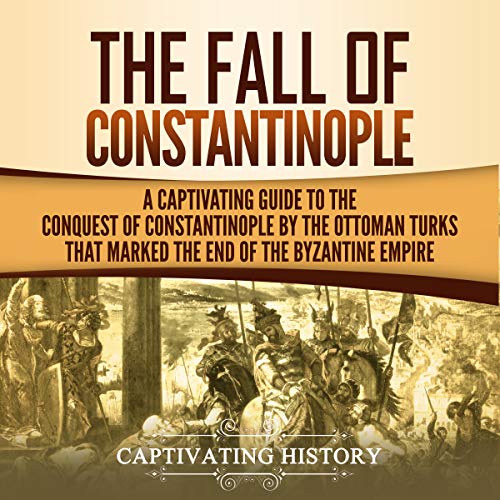 The Fall of Constantinople

Explore a major turning point in the history of Europe and the Middle East.

The fall of Constantinople was an event that had great repercussions across both East and West. Why did it happen? How did it happen? And what was the aftermath?

In this audiobook, you'll discover the most scintillating and relevant details - forlorn love, codified fratricide, and more - of the fall of Constantinople, the capital city of the Byzantine Empire.

Listen to the audiobook now to learn more about the fall of Constantinople!

What listeners say about The Fall of Constantinople

The book proves to be an important scholarly work which can be used in the academic world as an account of the events of 1453; however, it can also appeal to anyone who is interested in the subject, as it is very easy to read, even today, after forty years after it was written. Although some of the language feels outdated at times, on the whole, the book continues to be clear and understandable to a wide range of readers.

It is valuable for a wide variety of readers.

The author's account of this very important element of history is very detailed and thorough. While his style and the nature of the topic make the book very enjoyable to read, The Author does not hesitate to provide as much information as possible when describing the events which took place. While he does not directly identify the type of audience he wrote this piece for within the preface or the rest of the book, it seems as though the work can be valuable for a wide variety of readers and used in several different ways.

The fall of Constantinople, indeed a best guide.

This book is full of pathos as well as the complete understanding of positions of two struggling sides. But as a military history admirer I also like and appreciate the book by Roger Crowley on the same topic, because it offers a decent review of previous great sieges of Constantinople together with a better description of the military aspects of this great final siege that changed the owner of this great city.

What a history, what a great effort.

It's not a hands-on guide, however. Unfortunately, it is not accompanied by enough illustrations, maps and diagrams (all because this is an audible), but these can be found on.various online sites, especially the maps at wikipedia.

The Fall of Constantinople, top book.

It is a book to read today while Islam is again putting pressure on the Western world. What if it happened again? Captivating History shows how trading and economic interests outbid religious fervor. And that however dramatic the events may be, life reorganizes around any faith.

This is story of lost paradise.

The author shows how the decaying Christian Byzantine empire was practically reduced to Constantinople before being conquered . Mehmet II revived the empire and was considered heir to the Caesars. This is also the story of a lost paradise that nobody seems to regret today. Just as Islam lost its own paradise in Andalusia a few decades later under Isabella the Catholic.

Poor style, more of that later.

The familiar refrain of - more of that latter. Just tell the story. Just can't finish it

VERY CONFUSING, ALL OVER THE PLACE. The narrator, who by the way could at least learn how to pronounce the most basic words like Sepulchre, apoplexy, and promontory, to name a VERY few, was so distracting I'd loose track. Some of the most important factors, like the boom in the harbor, the plague that had decimated the population, preventing the weakened, but extensive and comprehensive walls of the city from being repaired, in the last few decades before the siege were not mentioned. It seemed there was about 30 minutes worth of meaningful material, so it had to be stretched with almost incomprehensible mishmash prior to getting down to the very cursory coverage of the most important part. I've enjoyed many Captivating History books, but this one is a mess.

like the humor in this otherwise tragic history. a fantastic story that shows the root of the Islamophobia of the west.

A good book with lots of history.

A good book but i felt it could not decide if it was going to be a technical book on weapons and armies or a vivid account of those last months of Constantinople .It tried to do both in great detail and became hard reading in the telling .

Concise overview of the events...

I enjoyed reading this book. The book is written in a sharp and easy to read style presenting an historical overview of the key events associated with the lead up and the fall of Constantinople. This format of historical has merit for providing a quick summary of the key elements of historical scenarios and is an excellent precursor to a subsequent more detailed analysis of points of interest that may emerge from the overview.

Excellently written, based on thorough, sound research and an abundance of source material without loosing sight of the grander international historic setting. The author has optimally combined the personal aspects, reflecting on Monroe's character, the personal material circumstances and his family life with the multitude of problems besetting a young, vulnerable nation experimenting with democracy; a nation still very much influenced by its colonial past.

I am a fan of history books, and I privilege high readable, well documented and general-picture-introducing books. This book satisfies all these criteria: it gives a full explanation of the context before and after the Empire's collapse, it is enjoyable to read, and it is well-grounded on the reports by witnesses from both parties.

Strongly recommended for everybody;

This is not my first book by Captivating History author team, and I bet will not be the last too. I strongly suggest to buy and read this book to all people interested in history in general.

I read couple of other books about the conquest of Constantinople but this book by Captivating History differs from others in a way that the reader is somewhat concentrated more on how dramatic the conquest was for Constantinople and its residents, probably because of the historical sources that the author collected. I gave a full 5 star for the suspense the book demonstrates and for some of the information that has never been compiled in such a well-organized manner.

Excellent addition to my library.

This is a superb account of the fall of Constantinople. It is objective, it gives the deserved due to the religious division of Christianity, and it is interestingly written. The book is relatively old now, but I don't think there has been a better account since. The author is a good historian and has the ability to turn any history stuff into a story.. I highly recommend this book.