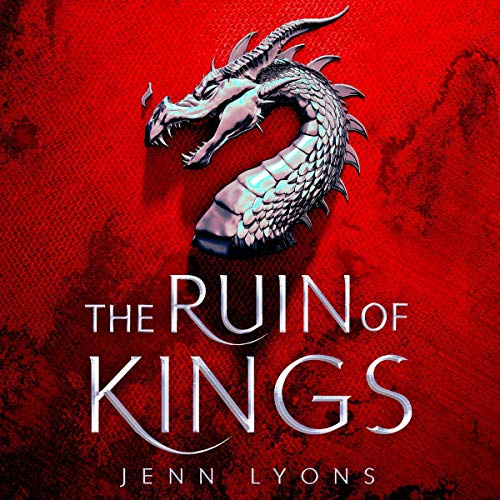 The Ruin of Kings

The most anticipated fantasy debut of 2019. In this thunderously good listen. Prophecy and magic combine in an incredible epic of imperial politics, gods and demons.

When destiny calls, there's no fighting back.

As a bard’s apprentice, Kihrin grew up with tales of legendary deeds. He also steals, desperate to buy a way out of Quur’s slums. Then he raids the wrong house, he’s marked by a demon and life will never be the same again.

Kihrin’s plight brings him to the attention of royalty, who claim him as the lost son of their immoral prince. But far from living the dream, Kihrin’s at the mercy of his new family’s ruthless ambitions. However, escaping his jewelled cage just makes matters worse. Kihrin is horrified to learn he’s at the centre of an ancient prophecy. And every side - from gods and demons to dragons and mages - want him as their pawn. Those old stories lied about many things too, especially the myth that the hero always wins.

Then again, maybe Kihrin isn’t the hero, for he’s not destined to save the empire. He’s destined to destroy it.

The Ruin of Kings is the first book in Jenn Lyons's extraordinary new series, A Chorus of Dragons.

What listeners say about The Ruin of Kings

I love a good "hidden lineage" bit come on. no one was who thought them to be and the tree of identities and relations ended up looking like a tangled web. narrator even admits "it's complicated" at some point which should tell the author to ease up on the twists. solid other than that, though

I hate to say this, but I get the impression from parts of the book that the author is quite the feminist due to quite a lot of gender - and other - politics happening in ways that are more current era and not fitting the genre too much. Add in it is my opinion this is why we have a female narrator being added as one of the narrators. For me the narration and split timeline theme made the whole book disjoined and not the immersive read it should have been. This book should have been read by one male narrator, given that the main character is male, and it would have been far better as a linear progression for the story. I really find books I have to listen to the main character being voiced by two different narrators grating, but listening to them from a man and a woman is worse, and more so when the male and female have such radically different tones and pitches. All this is a shame, as the story is good and the characters are solid ones that I liked. I'm not saying this is a book to avoid, as maybe you'll deal with the issues I found so grating and unnecessary. I'm just sad, as I could easy see me rating this a 4 or 5 star book if it hadn't been messed around with like this.

Amazing world-building but so convoluted!

Some very good performances from the narrators couldn't disguise an overcooked plot and convoluted structure.

Confusing, but enjoyable - worth a re-listen

At first, I found following the story a little confusing because of its narrative structure, but it was very enjoyable once I got into it. I enjoyed the lore and the world around it. I will be looking into this one again so I can pick up anything I missed.

I read this not long after publication but wanted to reread before completing the series. I decided I’d try the audio and WOW!

Excellent narration by all three. I’m considering listening to the others.

I became confused and frustrated multiple times but persevered only to find the last portion of the action even more confusing and therefore ultimately dissatisfying. 3 narrators, too many names, races histories and the most complex family trees that left me baffled. It had lots of promise but each thread of the story or character that interested me was ultimately mind-boggling complicated. I would not recommend this book sorry 😐

Loved the narration from start to finish, Looking forward to the rest of the books.

Maybe a bout half way though I stopped. Realised i just dont care for any of the characters.

The story is gripping if a bit convoluted in the beginning, I felt sad halfway through when I found out there was only one book available in the series, I hope to see more from this author in the future, stick with it!