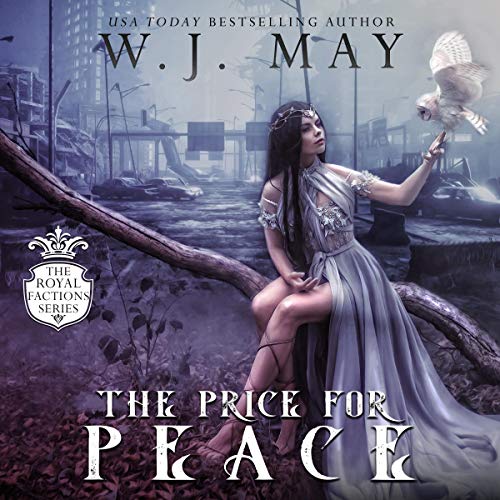 The Price for Peace

How do you keep fighting when you've already been claimed?

When 16-year-old Elise is ripped from her home and taken to the royal palace as a permanent "guest", she thinks her life is over.

Little does she know it has only just begun!

After befriending a group of other captives, including the headstrong Will, Elise finds herself swept away to a world she never knew existed - polished, sculpted, and refined until she can hardly recognize her own reflection.

She should be happy to have escaped the poverty of her former life. But she knows a dark truth. The palace is a dream on the surface, but a nightmare underneath.

With a dwindling population, the royals have imprisoned the teenagers to marry and breed. Only seven days remain of freedom before they will be selected by a courtier and forever claimed.

Danger lurks around every corner. The only chance of escape is death. But when the day of the claiming finally arrives...the world will never be the same.

The Price for Peace is book one in Royal Factions.

What listeners say about The Price for Peace

Great quick listen! I enjoyed the writing style and the storyline. Looking forward to book two.

Within moments of introducing us to the main character, Elise is dramatically yanked from her innocent, mundane existence and prepared for a life of royal servitude. The question remains, what type of servitude? Undertones of danger and seduction lace the storyline, with a dramatic culmination leaving the reader breathless to learn the true fate of Elise and her friends.

The narrator’s inconsistent cadence was somewhat distracting. Aside from the low murmur designating Elise and her counterpart, Will, the narrator chose to accentuate his pitch to the point of shouting when switching between the remaining characters.

Despite constantly readjusting the volume of the audio, I found this story engaging. I’m eager to start the next book in the series, immediately.

A solid start to a great new series.

Teens are being taken away from their homes and everything they’ve ever know, and taken to the palace to be “claimed”. As they are forced to comply, they are slowly finding out what is expected. Just what is the price for peace?

Wow, what a story W.J. May has written. The plot is gripping and the characters really struck a chord with me. I can’t wait to see what’s to come in the next book.

Graham Mack brought this story to life. I could feel each of the emotions and his timing was impeccable. A fantastic performance.

I was given this free review copy audiobook at my request and I have voluntarily left this review.

What a great beginning to a series Elise and Will are just amazing. From the very first page until the end i was on the edge of my seat. The Price for Peace is dramatic and intriguing and had a rollercoaster of emotions. Also the narrator Graham Mack just perfect i heard all the emotions in his voice. And the Ending im amazed and wanting more i def need to get book 2 and start reading

not normally what I listen to but the book was very good and held my attention. Looking forward to the next installment.

I think this book would have been a little more enjoyable if the audiobook nerrorator had been female. If the MC had been Trans or something it would have made since to have a male nerrorator read for a female POV. Instead they used a very, very deep voice to read and I never could slip into the story.

The story itself was mediocre at best. Kidnapped from her home to perhaps live a better life or be someone's intament toy, she goes through the motions and not much else happens. The selection finally happens and the end is predictable. You don't get anything else from it however. She is picked and that's the end of the book.