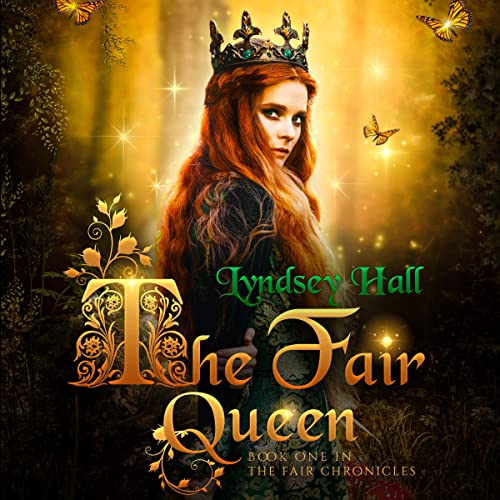 By: Lyndsey Hall
Narrated by: Olivia Barnes-Brett
Try for £0.00

For fans of Cassandra Clare and Holly Black comes a new story that will lure you into a world of magic and monsters, and never let you go.

The trees in Hartwood Forest are hiding an ancient secret, a door into a magical realm where fairy princes and monsters are one and the same. Seventeen-year-old Aria is bored of her small town and dreams of a life filled with excitement and adventure. She’s about to learn the meaning of “be careful what you wish for”. After a chilling encounter at the local summer fair, Aria is ripped from her normal life and dragged through the Veil into the Fair Realm by a strange, silver-eyed boy and his band of fairy soldiers. They believe she is the legendary Fair Queen, the subject of a prophecy that promises to unite the war-ravaged realm and bring an end to the centuries-long conflict between the Five Kingdoms.

Beset by terrifying creatures at every turn and hunted by a tyrannical king who will stop at nothing to prevent the prophecy from coming true, Aria will have to rely on her wits if she’s to escape the Fair Realm with her life.

Book One in The Fair Chronicles, a new young adult fantasy series for fans of The Mortal Instruments and The Folk of the Air.

What listeners say about The Fair Queen

Entertaining, but a little confusing

I really enjoyed this story and all the twists and turns, but I have to admit that at the end I was totally confused as to what happened and why. (A lot happens very near the end, and it wasn't explained well enough for me.) I especially didn't understand all the attacks against Aria along the journey by Oberon when he actually wanted her alive for his purposes. It didn't make sense. At any rate, the story and characters still hooked me, and I am intrigued to see where they go from here.

The narrator was good and very easy to listen too.

I received a free copy of this audiobook and am voluntarily leaving this honest review.

Excellent story. Loved the pace and characters and the twists. Look forward to next book

The story is magical and beautifully narrated.

There is suspense and the hint of romance. The characters are well developed and there is a sense of fun in the relationships that adds depth.

Some parts are a bit drawn out and perhaps could have been told more succinctly.

I received a free copy for an honest review.

I simply can't wait for the next book!

Just wow! This was my first encounter with author Lyndsey Hall, but definitely not the last! What a magnificent puzzle of a story, you never know who's friend or foe and there's some amazing details in the characters development. I was absolutely hooked from the way the story began and it didn't disappoint. It pulls you in and have some really great and original ideas regarding the whole faery element.
The narrator did a great job, very easy to listen to and distinguish each character.
Now there's only one thing left to say: I need the next book!

This story sends us to a magical land where you never know who is friend or foe. What people really want and who you really are. It sort of dragged at times when it needed to story build but there was plenty of action. Sparks of affection in this one but not too much romance.

I was totally captivated

Loved the story, loved the voice, great execution and experience I hope there is a book two.

Great fantasy read!!
I became wrapped up in this story right away. Very engaging storyline. And just when I thought I had all the players figured out, a completely unexpected plot twist caught me completely off-guard! Very enjoyable audio listen. Looking forward to the next one!

'The Fair Queen' is such an addictive story that I struggled to put down the entire time I was reading it! Aria's struggle between who and what she should trust as well as her struggle to find out who she is never failed to keep me on the edge of my seat, and I could never really tell what was coming next, making for one of the most exciting reads I've picked up.

This is a good fairy book to read. The human who thought was human is not what she thinks. She is a princess but didn't know until the gnomes kidnapped her. Her half-brother is trying to kidnap her, so she doesn't meet her real father. The relationship between the gnomes and the princess is entertaining.
The author did great in writing this story. There were times of chuckles and head shacking. The narrator did great with making it even better.

I received this book for free in exchange for my honest opinion.

STORY IS CLEAN, WELL WRITTEN AND EASY TO FOLLOW.
HAS SOME DARK FANTASY SENCES

ACCEPTABLE FOR TEENS AND UP.

Awwww not really my cup of tea team
I didn’t get invested, I was gifted the audio, to be honest the narration may have actually made the story slightly better I liked the voice actor but the storyline itself was a little boring.

It may have been that the fmc is a little young for me and just not overly likeable.

Aria is 17 and lives in a small town. She desires adventure and some excitement in her boring life. After a strange experience at the fair, her life changes in the blink of an eye. She is taken & dragged through the veil into the fair realm. Her captors consist of some fairy soilders along with a strange boy with silver eyes. The stranger tells her she is the returned fair queen and her whole life was a lie. Now she went from boring to a world she knows nothing about, Deadly creatures out for blood and having no choice but relying on strangers for survival. A great read with plenty of adventure.

I can’t recommend this book for a few reasons. The first is how unoriginal it is. I’ve read or listened to this exact plot probably a dozen times over the last year and I’m sick of it. While I’m the type of person who will re-read the same series dozens of times, it’s for books with far more compelling characters and settings than this one has. That’s not to say the writing is bad, it’s just eh.

The issue with recycling the same plot as countless other stories is I predicted every single twist and plot point it threw at me. None of the revelations had any weight and even had I not previously consumed similar stories, I still would have figured it out.

I will say the ending took me by surprise. I wasn’t expecting any sort of wrap-up, as so many authors choose to do. I’m grateful to the author for at least giving people a stopping point in the series. It’s not as if every plot point is wrapped up and done with, it’s more that the writer doesn’t leave you handing in the middle of a scene, expecting you to read the sequel to see the other half, which is something I despise.

As for the narration, I found it extremely grating and wanted to DNF this book because of it. The narrator opted to read the story in a bland tone of voice with few inflections. Which was also the same voice she used for the protagonist. The only time she sounded even slightly different was when she was narrating conversations or other characters, which made those scenes a breath of fresh air.

Maybe if you don’t listen to many audiobooks, this would be tolerable. As somebody who listens to audiobooks every single day, this is a very sub-par and amateur performance. Credit where it’s due at least, she did speak in a clean and clear tone of voice without any flubs, errors, static, or other common Audible issues. It’s not the narration as a whole, but her performance that’s lackluster.

NOTE: This copy was provided to me free of charge as a digital review copy. The opinions stated in this review are mine and mine alone, I was not paid or requested to give this book a certain rating, suggestion, or approval.

The narration was great, she did an good job depicting all the characters. It was read at a good pace, making me want to listen to the whole story.

A sweet engaging story that draws you in from the beginning. The amazing world building adds to your engagement, so many interesting things to learn about their abilities/history. I truly enjoyed all of the characters. They are well written and you fell for each of their situations. Every girl needs a best friend like Jasper. This book definitely takes you on an emotional ride with twists and turns along the way. Aria is easy to connect to, you root for her to figure out everything happening around her. I highly recommend you read this engaging, fantasy read. I received a copy of this book and am voluntarily leaving a review

Adventures can be dangerous

Well told and well narrated story about a girl who wishes for some excitement in her life. Be careful what you wish for.

All but kidnapped from her home and taken across the border to another world, she finds that not all excitement is healthy. Her life is in danger from multiple sources: kidnappers, wildlife, and others.

Well-developed characters who continue to grow throughout the story make for great reading.

If you like adventures and action, this is the book for you.