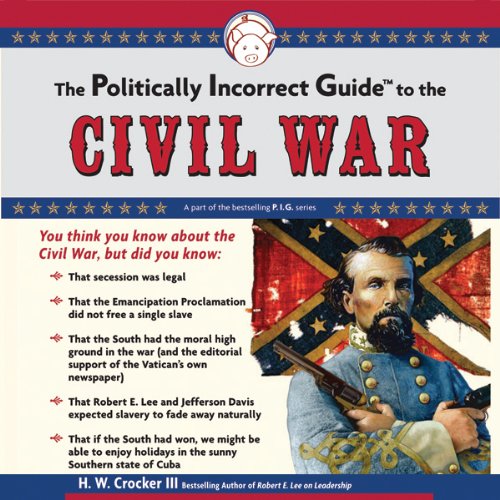 The Politically Incorrect Guide to the Civil War

Get ready for a rousing rebel yell as best-selling author H. W. Crocker III charges through bunkers and battlefields in The Politically Incorrect Guide to the Civil War. Crocker busts myths and shatters stereotypes as he profiles eminent and colorful military generals, revealing little-known truths, like why Robert E. Lee had a higher regard for African-Americans than Lincoln did. Crocker culminates his tome in the most politically incorrect chapter of all: "What If the South Had Won." This is the "P.I." Guide that every Civil War buff and Southern partisan will want on their bookshelf, in their classroom, and under their Christmas tree.
©2008 H. W. Crocker III (P)2008 Blackstone Audio, Inc.
Military Politics & Government
Show More Show Less

An excellent book to add balance to the normal story. Also a great insight to the key players

History is usually written by the victors, it’s been said, and that certainly seems true of the American Civil War. This book, however, gives a different perspective and calls into question many of the accepted (Yankee) preconceptions.
The Southern states, we learn, had a strong case under the constitution for seceding from the Union, and Lincoln’s Emancipation Proclamation of 1863, which didn’t in fact free any slaves, flew in the face of the Supreme Court decision six years earlier which ruled that slavery was legal in all US territories.
This book provides valuable balance to those with a blue rather than grey standpoint. A must read.

A partisan trot around the ACW. Revealing and annoying by turns. Difficult not to listen to every damned word.

I quite liked it

I'm not an expert on the civil war, so cannot judge its accuracy, but it seemed to be fairly impartial (but at the same time, aware of biases and the told this plays in the current political discourse)

The American Civil War Made Simple

Contrary to the title's suggestion, there's very little in this title than I would rank as Politically Incorrect. I would however recommend this audiobook unreservedly to anyone with even a passing interest in America's Civil War. The book is well written, divided neatly between battles and personalities and well read.

Do Two Wrongs Make a Right?

American history suffers from two great stains: Slavery and the Civil War/War Between the States/War of Southern Succession/War of Northern Aggression. What name you choose reflects your conclusion about the war. Perhaps the Europeans have it best. They call it the "American War."

Most war history is not only the victor's history, but it is also colored by the result of the war, which can obscure the causes of the war. This is the author's main argument: that the war to preserve the Union has been recast as the war to end slavery, thus making the war a noble cause. The war indeed did end slavery, but its causes and the sentiments of the participants were far more complex. The exploration of this complexity is the politically incorrect aim of the book: That while slavery was of course immoral, so too was this war -- perhaps even more so. And without this war, slavery may have ended in a manner far better for everyone, including the slaves.

In the victor's history the loser is vilified. Among these villains we have a large proportion of people who were highly regarded prior to the war, and even after the war, including the grandsons of many of the country's founding fathers. What motivated these noble countrymen? What motivated the Union leaders? The answers do not correspond with a politically correct noble war to end slavery. The answers point to a stain in American history as dark as the stain of slavery.

Nothing to see here folks. For anyone who has a knowledge of the Civil War beyond what the teacher told you in high school, there are no revelations in this book. The book is of course slanted in favor of the South and is full of opinionated writing that is weakly backed by questionable facts. One of the issues I have with the book is that it still doesn't take responsibility for the South firing the first shot. Had the South waited and gained support from Britain and France first, history might be very different. An outright falsehood in the book is the statement that Lincoln owned slaves. Lincoln's family left Kentucky when he was a child and he never again lived in a slave state. Lincoln did hire both black and white servants, and may have come into possession of an indentured servant (someone working to repay a debt, not the same as a slave). There is no definitive proof that this person was indentured.

Overall this book is a waste of time. If you want to learn about the war, read McPherson and Foote.

Horribly disappointing. Author is clearly pro confederate, makes informational mistakes, interjects his own opinion as fact and is most definitely a idolizer of Robert E. Lee. Anyone listening to this book should also listen to The Myth of the Lost Cause by an author named Bonekemper.

Crocker states that General Nathan Bedford Forrest had slaves begging him to take them in as slaves in antebellum times, and Crocker goes on to claim, therefore, that the Southern slave owners took care of them all, just like Forrest and Lee. So because two slave owners were decent, thus all of them were? Really? And anyone can look up autobiographies of escaped slaves and read up about their abuse and suffering. Crocker avoids pointing out that the Confederates were supposed to exchange POWs with the Union, called paroles, and not supposed to release their received paroles to the battlefield, but broke the agreement with the Union, since the Union encountered the same POWs on multiple occasions; thus, the Union ceased the paroling. Crocker saliently worships the South, using high praises for all the states, politicians, and people themselves of the Southern region. Love for one’s land is fine, but it borders on neglecting any wrongdoing. He stresses that through Christian faith the southern states were going to free the slaves on their own, if it weren’t for the pestering and harassment of the abolitionists, which is just logically paradoxical. He equates Lincoln to King George III; even calls him a dictator. You get the impression that Crocker would hail John Wilkes Booth as a martyr and a saint. It’s obvious that there was an ulterior agenda in writing this book. When I read the title “Politically Incorrect,” I presumed this book would offer rarely read information, and it provided a few trivial notes, like Lee hiding under a log from a few Mexican soldiers during the Mexican war, but it’s clear as day that the author perceived the South of being innocent of any wrongdoing (even neglecting to mention the Reverse Underground Railroad, where freed people were illegally forced back into the slave trade). I can agree that not everyone in the Union were innocent: Sherman was a racist, Grant was a drunken anti-Semite, and McClellan was a useless, incompetent coward. But if you want an unbiased, impartial book on the Civil War, then seek elsewhere, because this is incredibly one-sided to the point of being irritating. Myself being a completionist and wanting to keep an open mind, I forced myself to finish it, which was no easy feat. If I have to hear him use the phrase “was gone with the wind” one more time from this book, I’m gonna snap.

This book re-wired my brain. The author's open sympathy for the confederate cause is backed by rational arguments and historic facts that the public schools in the north didn't impart to me. Crocker is fair to the Northern heros, too, giving credit where it's due.

The narration is excellent, couldn't turn it off.

The David Duke history of the Civil War

What a waste of time. The author glosses over the estimated 550,000 deaths caused by these traitors to their country. The author would like us to believe that slavery would have died eventually in the CSA of it's owen volition. Yeah right. This book contain nothing new about the Civil War, but seems to try to justify the South's secession. I would suggest Battle Cry of Freedom if you would like to know why the South started the war.

Civil War from the Southern Point of View

A balanced look back at the thoughts and feelings of the South before, during and after the Civil War. Nice review of the strengths and weaknesses of the Generals for both sides.

Although the author makes many good points, some of his assertions are, in my opinion, sheer nonsense. It always amazes me to hear people try to pass off the crap about the war not being about slavery, and I was born and raised in the South. If you listen to this, do so with an open mind and remember that these are his opinions, then listen to some of the good Civil War books :-)

Accurate history lesson for all Americans

This book is no doubt the most accurate and eye opening accounting of the war between the states that I have seen. All Americans, or anyone for that matter, should listen to this and understand what really happened during those years, and since. I would recommend this to anyone that wants to know the truth about the Civil War and how the South is today.