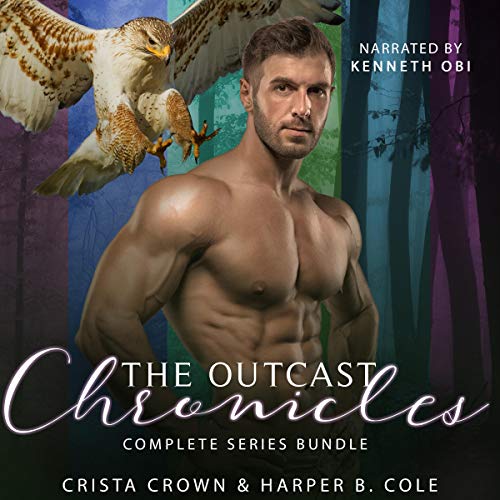 By: Crista Crown,Harper B. Cole
Narrated by: Kenneth Obi
Try for £0.00

The Outcast Chronicles is an epic mpreg shifter series that takes a small, rag-tag team of bounty hunters and turns them into a tight-knit pack of found family, fighting a war that started centuries ago...but will end with them.

This bundle includes all six books from the series, including four brand-new, never been seen epilogues that happen years after the ending.

Freedom for His Omega

Lonely alpha Asher finds the perfect mate in a wounded mountain lion guarded by a scarred grizzly shifter with visions of the future, if he can allow himself to love.

Acceptance for His Omega

A one night stand leaves Nick with a baby and no way to contact the other father, Dallas, until a dangerous arsonist appears again.

Healing for His Omega

Widowed, pregnant, and mourning his kidnapped son, the last thing omega hawk Benjamin wants right now is a serious relationship. So he seeks comfort in the arms of Kurt, the one man he doesn't have to worry about falling in love with him, until makes them both realize what they might lose.

Rebirth of His Omega

Fire is the one thing Ryan fears, after it took his family from him. Too bad his true mate is the Phoenix, a creature born of fire who has loved Ryan through many centuries and lives.

Simon didn't realize how alone he felt until the dragon Ryeth bonded mentally with him. The two are meant to be together, if only they can free Ryeth from his prison of ice.

Reaching for His Omega

Grizzly alpha Caspar long ago resigned himself to a loner life, never suspecting that the future he saw with Asher Lambert's pack of outcasts would ever be more than a means to an end, that they would become his family. And then he meets a man whose future he cannot see...

If you're not interested in man on man loving, mpreg, knotting, epic fights, adult language and adult situations, these audiobooks are not for you! One of the books mentions past infertility. This bundle contains the complete series plus bonus epilogues.

What listeners say about The Outcast Chronicles Complete Series

Love all the character interaction and the way the packs story flows through all the books even though they can probably be read as standalone. Narration is spot on.

This is series bundle is bright and colourful 🌈 of inclusion. I enjoyed the world building and the backgrounds of the various characters. If you enjoy shfters of all kind and enjoy mpreg fantasy, this might be your book. The narration is excellently done by the great late Kenneth Obi it gives I just that bit extra.

Any book or series by Crista Crown is always excellent, and this is no exception! Well written and narrated with great characters and plots.

A Beautiful Series of Stories🥰


Great characters, storyline with all the feels you’d expect from a shifter series.

My personal favourites are books 1-3 and 6.

great bundle, the voice acting is really good and I really enjoyed the hole lot though Ben was my least favourite

If these are the type of books you love - get them. You won't regret it. Theses books lovely and made me smile but to be honest I probably won't be getting anymore.
The story line was good, the characters well rounded but I found myself fading out the love scenes (probably backlash for the amount of Mills and Boons I read as a teen to be fair lol) and this put me off a bit. Plus I still haven't worked out how the omegas actually gave birth... Probably something that should stay a mystery to be honest! 😁

Great bundle of shifter stories with some magic elements thrown in. Many omega stories tend to be overly cheesy, but these were interesting without much angst.

I loved this series.

This series held my attention until the end. Every character was interesting. I loved the dynamics of each pairing even if unusual. This story shows that first times can end in unexpected life changing events. This story also shows what can happen if we don't love our children and how they can be easily lead down the wrong path without our guidance. It also but with love and guidance they can be saved.

This is an AMAZING series. I absolutely love this one! All the stories flow so well and have so much excitement. Purple glitter dragons!!!!!!!
Kenneth does a wonderful job with Narration on this one as always! He has such a wonderful voice. I really love how he differentiates them all as well. Casper's has to be my favorite.

So cheesy and cliché! DNF.

Ignore the reviews that talk about enjoying the character development, plot, or anything else that might lead you to believe this is worth a credit! The dialogue is so horrible I had to laugh. The inner-thoughts were also laughable. I just could not with this book! Another dud 😔

Loved the book a lot. Very interesting & in depth story line. Relatable Characters from various backgrounds. Narration was spot on & held my attention. Like the way the Characters continued to interact with each other as the Book Series progressed.

I love these stories. Feeling like an out cast is always hard. but finding your family where you least expect it is amaxing

I am sorry… But the story was going absolutely nowhere. It was more about the sexual encounters which weren’t that good anyway and the narrator would put you to sleep.

Loves stories is my fav. But add in the unknown elements and the battles. Its epic. Getting to meet everyone and then gettingbto know and love them is amazing. Even surly Casper.
I love Kennith Obi as a narrator and he just proved himself again.
I hope the author does a series about the kids.

Totally enjoyed this bundle from start to finish...The characters where very likable. The narrator did a good job with the voices and he kept me in stitches with Simon and Ryeth story...Simon was fun...when he kept asking when he was getting his body back had me LOL. I also love Nick and his "foxy" attitude. He was a good match to Dallas. Finally when Casper got his HEA that was special...Loved it all!

This series is simply amazing! I love every second! Each couple brought some adventure and humor to the pack and I love that I could laugh while listening. Mr. Obi did a fantastic job narrating!