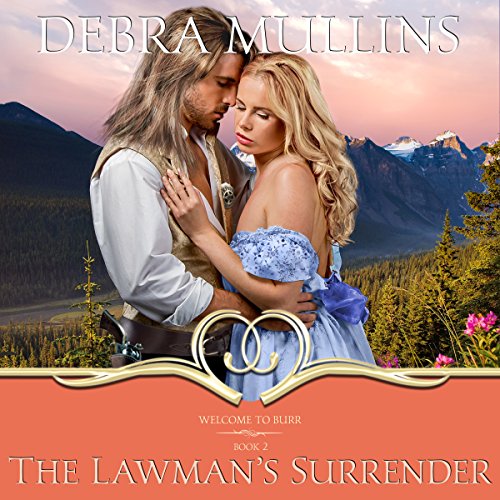 By: Debra Mullins
Narrated by: Joe Arden
Try for £0.00

Finding the truth will take some fast talking - and a faster gun.

Susannah Calhoun has always been able to charm her way into anything she wants. But when she is arrested for a murder she didn't commit, she realizes there's no sweet-talking her way out of this one. The victim is the brother of a US senator, who demands Susannah be tried in his home city of Denver. He's even summoned a US marshal to make sure she gets there.

Marshal Jedidiah Brown reluctantly accepts the assignment as a favor to a friend. He already knows Susannah's trouble from the way sparks flew the first time they met, but he doesn't believe her a murderer. When a lynch mob busts her out of jail and tries to hang her, Jedidiah realizes he has to buy time to prove her innocence.

Pursued by the man who would see Susannah dead, the road to Denver is filled with peril as they search for the witness who could clear her name. Their time alone on the road brings them closer than ever, but the witness proves elusive, and Denver looms on the horizon - the end of a journey that could end with love. Or the gallows.

What listeners say about The Lawman's Surrender

This is a hate, love relationship

Sometimes no matter how long you fight with yourself, love will find you, just let go.

loved this story as well as the first one, I can't wait to start the 3rd book in the series. characters were developed excellently. Narration was performed to perfection, I will definitely be looking for other books read by Joe Arden.

Enjoyable read with an interesting occurrence in every town they stop in on their journey to Denver. Fresh and entertaining with love thrown in the mix.

Mooning damsel in distress. Too much on the heroine’s fluttering heart and tingling skin. Not enough on the plot.

I liked this book a great deal. The authorhas a way of writing that envelopesthe reader completelyin the moment. The moments included romance, was as good as book one, but also a murder mystery which was FANTASTIC!! The best part is the adventure a cross the state these two go on. The author builds a slow tension and couples it with a vivid account of the fear of being chased and fighting for your life better than any action book. My heart raced during her pursuit and I truly cried when she was captured. I did guess the who-dunnit but not the why, so that was a nice surprise.
Wonderful read! I think this author is one of my new favorites.

I really enjoy everything I have read of Debra Mullins, BUT I loved this book!! Definitely a must read!

I figured they would eventually get together but it was nice to see they did it for love. Nice twist at the end!! First time listening to this author. I will definitely find more books to enjoy!!!

Good sequel to previous book. The characters are well developed and the
plot has enough twists and turns to
keep your interest. A fun and exciting
romance.

This engaging historical fiction adventure is loaded with verbal sparring, emotion and suspense as Suzannah is accused of murder and Jedidiah is the US Marshal who is escorting her to face trial. The sexual awareness between the characters is slow building and delicious and the dastardly characters are audacious in their desire to kill Susannah before she can appear before a judge. They are vile characters and their cat and mouse games kept me intrigued and though I figured out who the killer was halfway through the story it kept me engaged until the very end. I listened to the audiobook and I loved the swoon worthy southern accent exuded by voice actor Joe Arden. He was absolutely perfect in his vocal performance.